My new system uses a base with a building/buildings permanently attached and landscaped.  The open base space is only enough to allow a set number of stands or units to be in the town area. 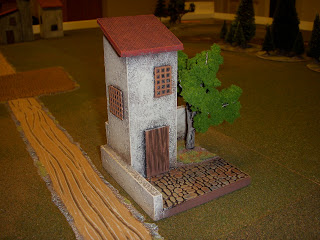 The open area to the front is 1.5" x 3" - the same size as my infantry stands for my WW2 rules.  You can see the old town section built into the terrain tiles in the left rear of the photo. 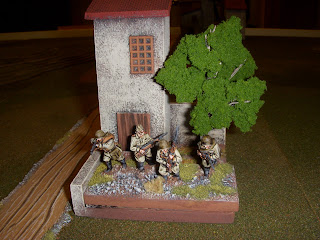 Here's the area with a Soviet infantry squad (or company, depending on the rules) deployed.  Note that the squad will be able to fire at only a minor downward modifier firing in this direction - the only direction they can be deployed.  Units must be deployed facing an edge of the area.  In my WW2 rules, firing to the flank/rear is an additional negative modifier.  So - a pretty good defensive position if attached from this direction, not so good from the other directions. 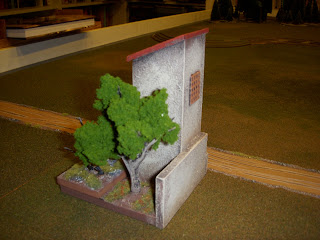 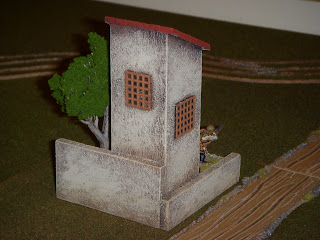 The building is knocked together with some solid wood pieces, cut to length/angle with a power mitre box, and some macrame (spelling??) grid for windows.  The roof/shingles is from mdf with the pattern pressed on one side.  Works great for mimicking a shingle effect, and the resulting roof is tough and gamer proof.