I'll do these posts as I work through the scenario, proportioned for a smaller miniature army that is functionally possible to use in a reasonable length game.

A quick look at a map shows that the length of the Gettysburg field, from roughly the end of Little Round Top to the other end at Cemetery Hill is around 7000 yards.  I haven't decided if the first day's battle will be included or not.  For this exercise, I'll just use the 7000 yard figure.

So, this begins to tell us what kind of game proportioning (real units to game units) we'll see.   If we assume the same 2.5 to 3 to 1 scaling, we can start to see where we are.

Assume that the game unit is the game representation of the nucleus of the multiple units it represents.  The multiple real units would be deployed "somewhere" around that game unit nucleus, with 2.5 to 3 times the frontage.   This means we'd also have more depth than the nucleus game unit.  So, if we make another assumption (never assume, or it will make an....), and say that we have something like a box of 2.5 to 3 real units wide by 2.5 to 3 real units deep roughly centered around our game nucleus unit, that means that the game unit represents something like 6.25 to 9 real units.   I can live with rounding that and saying 1 game unit = 6 to 9 real units.

At the least detailed OOB level, the Army of the Potomac had around 93,000 men.  The Army of Northern Virginia had around 73,000 men.   Let's assume, for the sake of conversation, that the infantry present for battle (leaving out cavalry and artillery) represents around 60% of those numbers.  That leaves us with around 55,000 for the AoP and 45,000 for the ANV.   If we take that further, and assume that each infantry regiment is 500 men, then the AoP has 110 regiments and the ANV has 90 regiments.    Are these numbers correct?   I don't know.  I have plenty of resources to acurrately figure this out, but quite honestly, this is for a game, not a dissertation and I just don't want to go to that level of research!

My ACW collection (25mm) presently has 15 Federal infantry regiments in it.  Zowie!   15 units is right in the middle of the 12 to 18 unit range we're looking at above.   If I follow proportions, the ANV would then have 12 infantry units or so for the game.

What does each game unit represent?   Surely at the extremes, a very large brigade to a division of real troops.   Does that change the game?   Not in the least.

Next will be a scaling of support units (cavalry and artillery) to get that correct.

This is actually quite a bit of fun!   Now its back to the painting table to work on Libyan spear units for my Carthaginian army (Pulse of Battle).
Posted by Brent at 8:03 AM 5 comments:

I've been pondering which battle I'd like to use this process (proportioning) for to set up a game.   My decision - the grand daddy of US battles - Gettysburg!

Well....why not?    Everybody knows it, its fascinating, and there is interesting terrain.

Having been part of a club game for a convention around 25 years ago that was intended to do all three days of Gettysburg in the 3 days of the convention....in real time....that at the end of day 3 of real time at the convention was still mired in day 1 of the battle representation.....I know what hassles there are in doing a 1 unit to 1 unit representation of this battle.

I'm really looking forward to this!
Posted by Brent at 7:50 AM 2 comments:

What do I mean by "Representational, Proportional" scenarios?   A more "common" term would be "bathtubbed", although I think this concept goes way back to Featherstone, Young, and Grant.

In short, all it is about is taking an historical action and scaling it to fit your existing collection size.  There are some other considerations, and I think that is the "art" in the process.

Let me blather on and explain myself.

I see multiple posts on TMP or in blogs every day about refights of the battle of XYZ, using completely historical OOB's and ratings and terrain.   Except.....does anybody enjoy these?   I mean - if the real battle had 74 battalions on one side vs. 63 battalions on the other - who wants to play that game?    Do you have a life?    Not to mention the space and abstraction issues that arise from packing all the depth exaggerated units onto the table, the sheer time to move all the figures.....yawn.   Those games remind me of monster board games.  They sound good in theory, but by the time you get all the pieces set up, you want to just put it away because the thought of playing has become so daunting.

The solution is to take an historical action and just scale down the action.

But wait (I hear you say) - instead of doing that, I prefer to use grand tactical scale rules, and have each unit represent a brigade, with special rules for that appropriate level of command.

Well - that works, but quite often those types of games lack the tactical flavor and decision making that players like.

I much prefer to (using horse and musket terminology) use the battalion as the game unit and still have all the tactical interplay in the game.

Externally scaling battles also allows compression of ground scales, as well as terrain features.   If you externally scale units, you should similarly do that for towns, villages, etc.  (Have you looked at how many villages you'd have to use if you did a "true" scale game in NW Europe in WW2?)  I'd also propose that the ground scale could be similarly scaled.

I think I'll take on an historical battle as a Proportional game and use that for some future posts as I work through the process.

No pictures this time....just thoughts.
Posted by Brent at 7:48 PM 3 comments:

WooooooHoooooo!  The Denver Mannings....err....Broncos are 9-3!   Sweet season so far, I can hardly wait until Thursday when the next game is against the Raiders.  Have I mentioned how much I dislike the Raiders?

Anyway - an update on Pulse of Battle.  We played another development game last night, and it successfully cleared up a handful of lingering issues.   I'm very happy with the rules, how they play, and the feel of the games.  I'll be cranking away on finishing the writing.

Next game in January will be with an entirely new concept for "Follow Me!", the WW2 squad game. 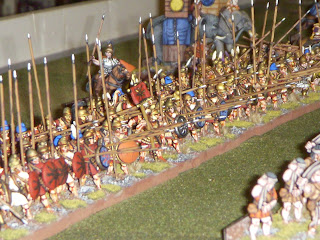 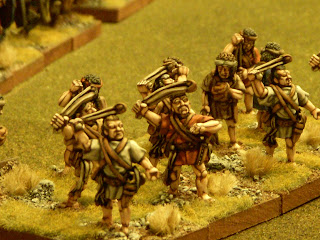 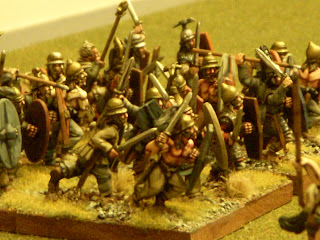