I'm a little behind on reporting on the game from last Saturday - a coalition force of British/Spanish/Portuguese (Ed, Chris, Terry) taking on a French army (Greg C, Greg R, Tony).    Well - there were "supposed" to be Spanish at the battle, but pre-game scenario generation resulted in the Spanish brigade being slow in marching to the battle.  This led to a complete change in plan by the Allied command, as they'd planned on the Spanish taking up positions in the town on their left flank and protecting that same flank.   The French ended up getting the jump on the Allies, and deployed well forward with the bulk of their army - infantry in the center, with a grand battery on ridges in the French left/center.   The majority of the fighting took place in the plain between the town and ridges, with both sides giving as well as they received.   In the end, the French won, but only with 1 Army Morale point remaining!  Fantastic game, down to the wire drama.   On to some photos of the game: 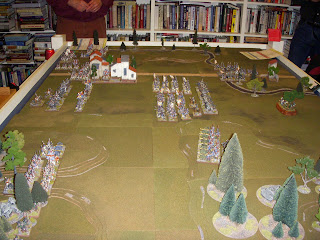 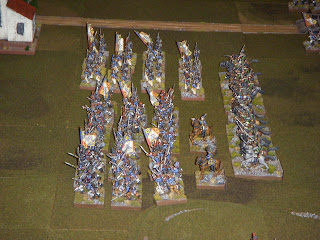 French attack in the center plain 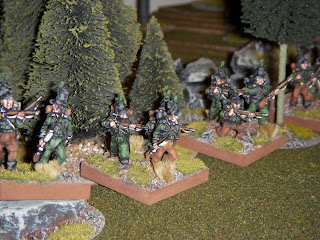 A quiet battle for the 95th....the French don't want to come into the woods and play 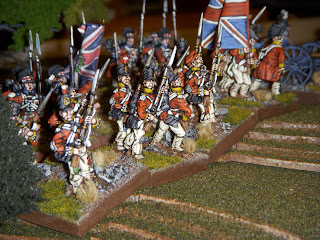 British deployed in the right center of their line 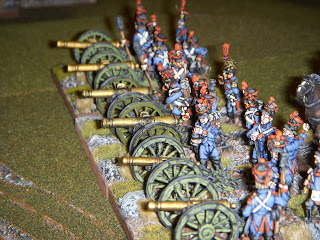 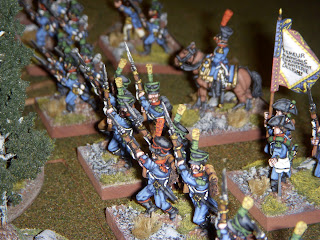 French light infantry on their left flank, electing to stay in the woods opposite of the 95th 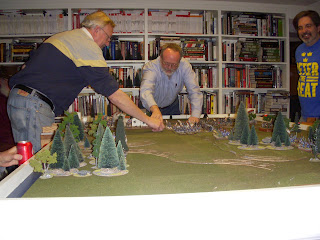 Left to right, Genls. Chris and Greg R. position their troops in the crucible outside of the town.  Genl. Tony
seems to be enjoying how things are going.... 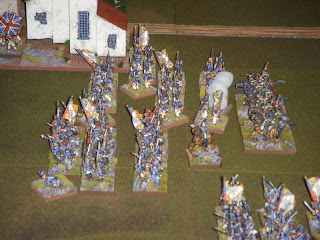 French attack stumbles as losses mount.  The brigade commander (best in their army) of the largest French brigade is picked off his horse by a musket ball and the attack stalls without any command presence. 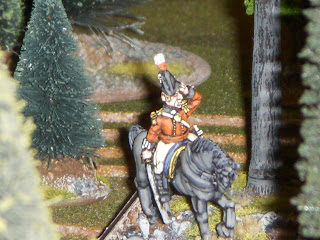 What am I supposed to be doing???? 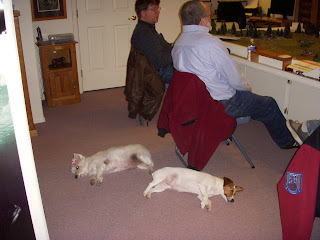 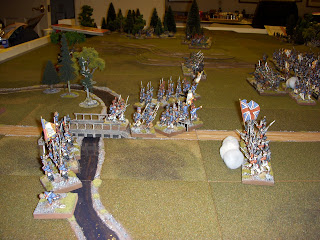 More to follow later!
Posted by Brent at 1:18 PM 2 comments:

I've long been interested in the Plains Indian Wars (PIW).   I suspect that most of that can be traced to growing up near a "battlefield" - the Beecher Island battlefield.  To a greater extent, it has been my lifelong fascination with Custer and the Little Bighorn battle.

I just finished a novel of the LBH, titled "A Road We Do Not Know" by Frederick Chiaventone.   I thoroughly enjoyed the book, and found that it gave me a few more potential insights into the battle and personalities involved.   Chiaventone (in a Pritzker Military Library broadcast) mentions that he's been part of army staff rides at the LBH, and at every turn, the officers made decisions that matched what Custer did.

I think Custer did the "best" that he could with an impossible situation.  I don't believe any of the odd and weird stories or conspiracy theories about the battle (ie Custer was a glory hound and a moron).  I think he had no real clue until too late about what he was up against, did the best he could, and was overwhelmed.  Combat isn't a wargame, and it isn't fair.   No matter the reputation, the personalities....sometimes it is just impossible to win, and the inevitable happens.

At any rate, I heartily recommend reading the novel mentioned above.   I'm also waiting for Chiaventone's treatment of the Fetterman fight to arrive.

As a result of all this, I'm now spinning thoughts in my mind about gaming the period.   I'm thinking the Indians are the tricky thing, as they don't really have units.  More of amorphous blobs that grow, shift, slacken through an engagement.  Also - no consistent mounted or dismounted tactical dispositions - it was every man for himself, with a mix of whatever worked for the individual on the ground.   I'm thinking my Indian units will be a mix of mounted and foot figures,to visually show this.  Mounting and dismounting shouldn't really be a tactical decision of the leaders, as they wouldn't have that degree of control over the individuals anyway.   Lots of things to noodle on!

A couple of photos for inspiration.  Old Glory figures painted by Brad Thorton. 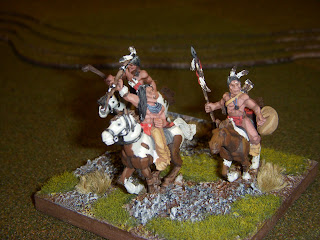 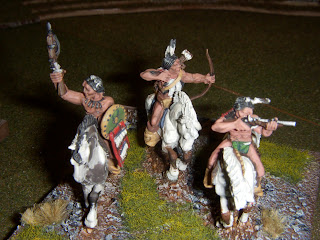 Looks like we'll be going up to the LBH battlefield this summer for a long weekend tour.  I can't wait!  We'll be driving instead of riding the motorcycles.  That avoids the scheduling issues that can arise with the unpredictable and sometimes dangerous weather (rain, thunderstorms, hail).
Posted by Brent at 12:15 PM 5 comments:

I finished 3 town sections.   These are 6" square sections, with various bushes, fence sections, and trees added. I never used this type of shrubbery before, but I just felt that my town areas were too clean and industrial looking.   The sections have areas spaced for units to fit, and only fit in one or maybe two directions.   In my rules (Field of Battle), I'm using a house rule that says that firing in the direction allowed by the space on the section (facing out of that side) is down 1  (primary) for firing, while firing any other direction is down 2 (secondary).  That will make some nice differentiation between town sections, and add another series of tactical decisions for players. 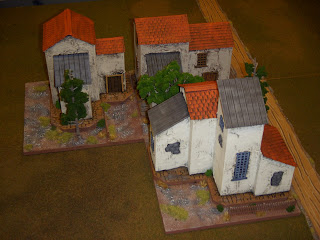 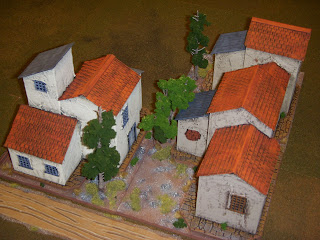 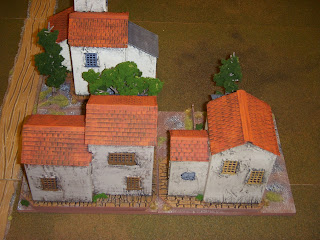 There is a noticeable number of gamers doing "imagiNation" armies, campaigns, etc.   While I admire their creativity, I find myself asking "why"?   That question is really the topic of this post.

I think there are 3 categories of games, and gamers.  I limit this purely to "historical" miniatures, not SF or fantasy.   In broad terms:

The Fiction gamer is the realm of the guys with imagiNations.   There isn't really historical context, other than very broad strokes such as tricornes and muskets, horse and musket armies, etc.   I also put ancient tournament gamers in this category.   These are the folks that play Persians against Normans and it doesn't bother them.   I guess another way to categorize this group is that the game itself is the most important thing to them.

The Historical Fiction gamer is most likely the biggest category.  These are folks that don't necessarily follow exact troop ratios, or use historical scenarios, or require that every game be exactly based on an historical incident.   I fall squarely in the group.   For example, my French Napoleonic army sports early period flags and uniforms.  But I also have an 1813-1815 Prussian army that they fight.   Oh No!!!   It can't be!!  Yes it can.    I rarely play games based on historical scenarios, rather choosing to create situations that are interesting.   My Confederate army all sport the Army of Northern Virginia flag, but have fought in western theatre based games.   Guard units show up in games with historically too high of a force ratio in some games.   The constant through this thread is that the games feature historical armies fighting other historical armies of roughly the same time period (only Napoleonics vs. Napoleonics, for example - regardless of whether they are early or late in the period.    My Austrian Napoleonics all have helmets, but I'm sure I'll be adding later uniforms in shakos to the army.  Why?   Because they look cool, and I'm not going to duplicate an entire army for a trivial difference.

The Non-Fiction gamer is where you find the button counters, the debaters, the boardgamers, the guys that only play a game that is straight from history.   I don't have any problem with this, I just find it limiting.   Doesn't it get boring playing Gettysburg for the 53rd time?   I find it interesting that boardgamers value the scenario and not the rules.  To me, that is the exact opposite of miniature gamers - who tend to be Historical Fiction gamers.  Boardgame companies regularly give away their game's rules for free.  The value of the game is its replayability and the game scenario that it presents.  The rules are just a means to an end.

Not much of one, really.   I just find it interesting to see how different we all are, yet we all share a passion for military history and wargaming in all of its different variations.

Next to Final Stage: Flags

I got the flags printed out, cut out, and glued onto the flagpoles last night.   I use the flags from warflag.com - great stuff and a huge variety - which I have modified in Paint to look shaded/painted.  I'm sure they're not "professional" standard, but I like 'em.   All that remains is to finish off the flag edges with paint to cover any white paper reveals, and possibly some highlights here and there on the flags.  A shot of DullCote and they're ready for battle! 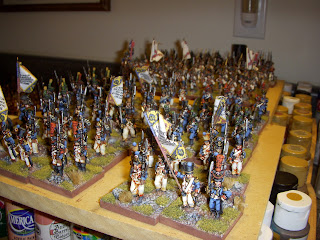 The static grass has been highlighted, and the bases are complete!  Now all that remains is completing the flags. 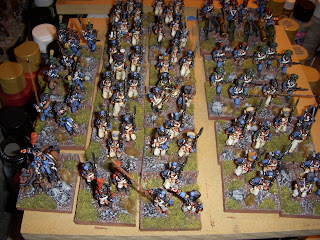 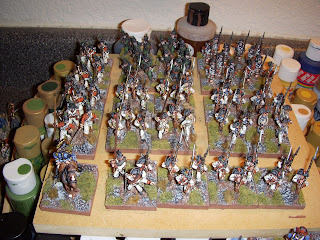 Here's the next stage completed.  I've glued clumps of "grass" to each stand.   In reality, those clumps are just 1/4" or so sections of jute twine that I cut and stick in a blob of yellow glue.  The static grass is applied to areas of yellow glue and pressed down. 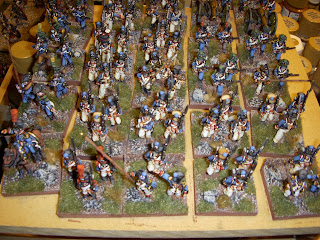 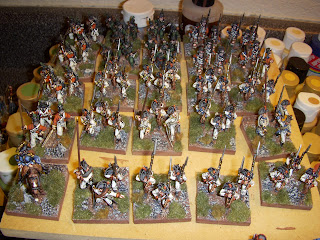 Next up, after the glue dries, I'll brush off excess static grass and then drybrush on a yellow highlight.
Posted by Brent at 9:46 AM 1 comment:

I've now drybrushed three shades of gray (dark, medium, light) onto the areas previously painted black.   Next up is gluing on grass clumps, then static grass. 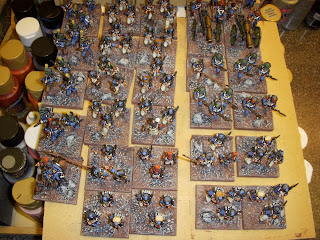 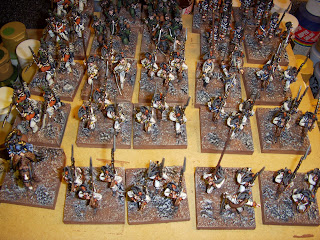