There and Back Again

We played the 3rd game of our FPW campaign season last night.  The previous two games had been split with the French winning game 2 and the Prussians winning game 1.  After 2 games, the victory points were Prussians 10, French 6.

The French had selected the battlefield with hopes of nullifying the Prussian Krupp advantage.  As it turned out, both armies completely deployed in the "open" end of the battlefield - as shown below. 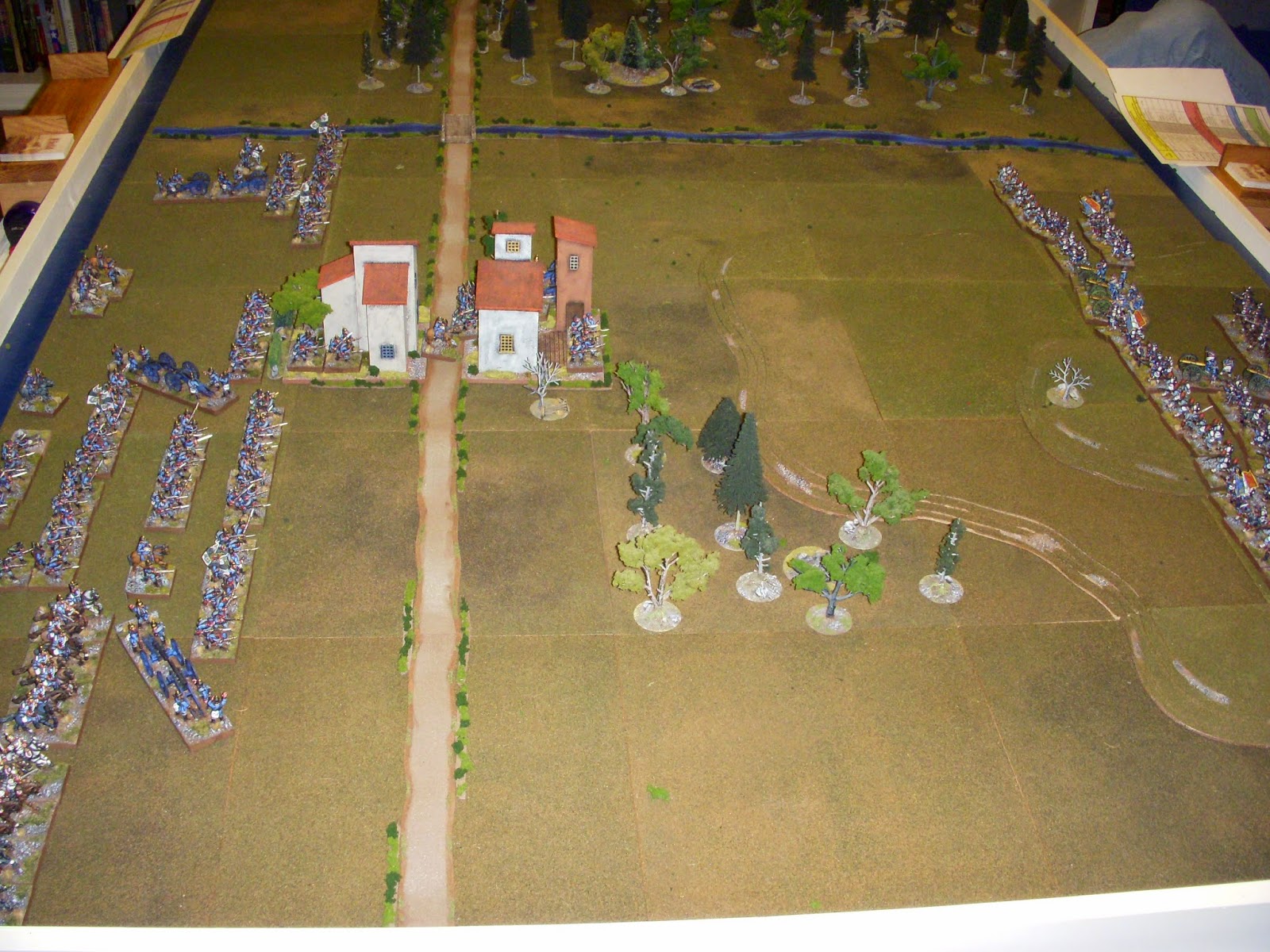 My camera battery died before the game ended, so I only have a few shots of the game - 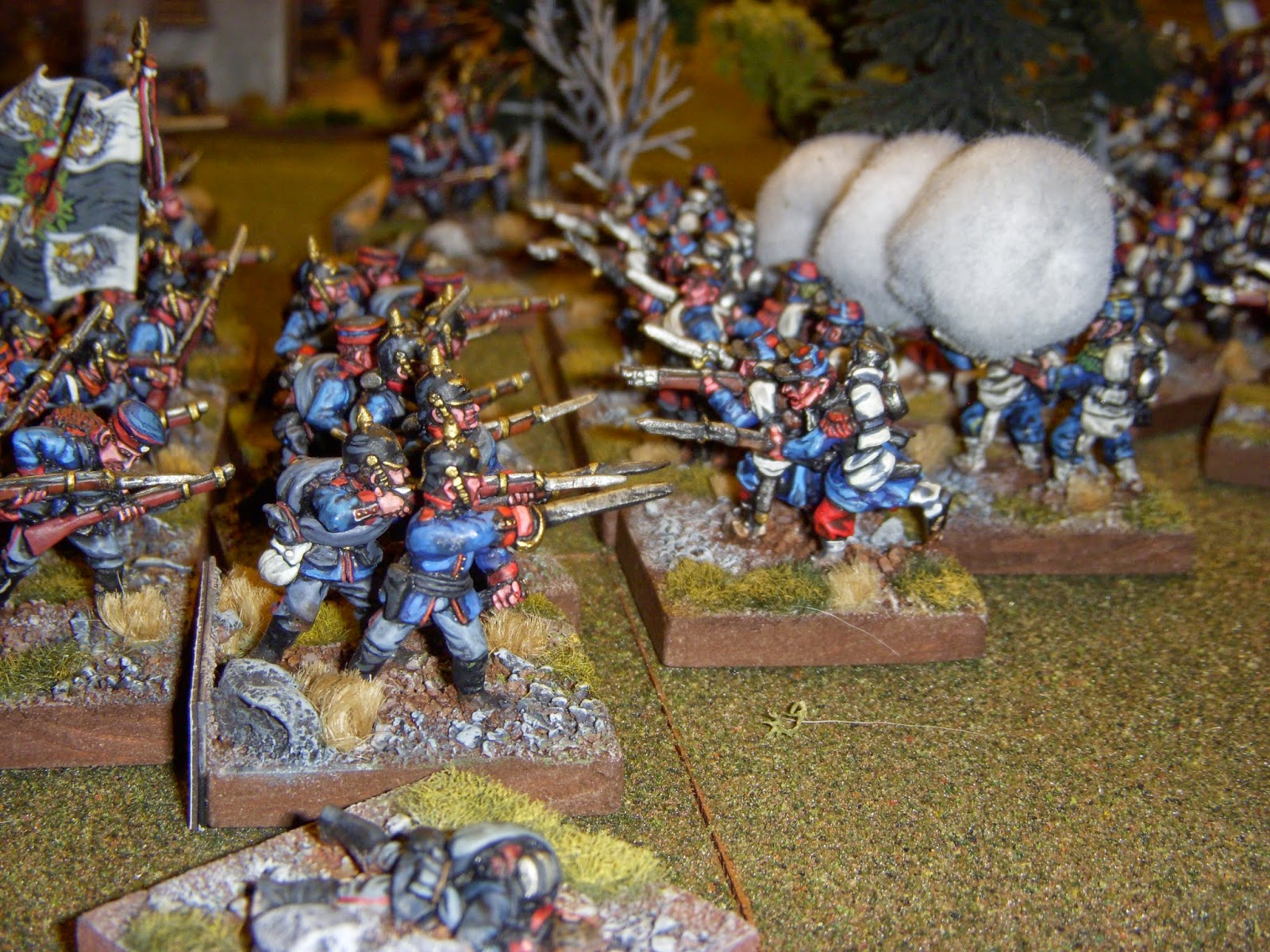 The battle turned into a bitterly contested fight for the Class III woods next to the town.  Terry (Prussian) and Greg R. (French) battled it out while Greg C. (Prussian) and Rodney/John (French) traded some long range fire on the river flank. 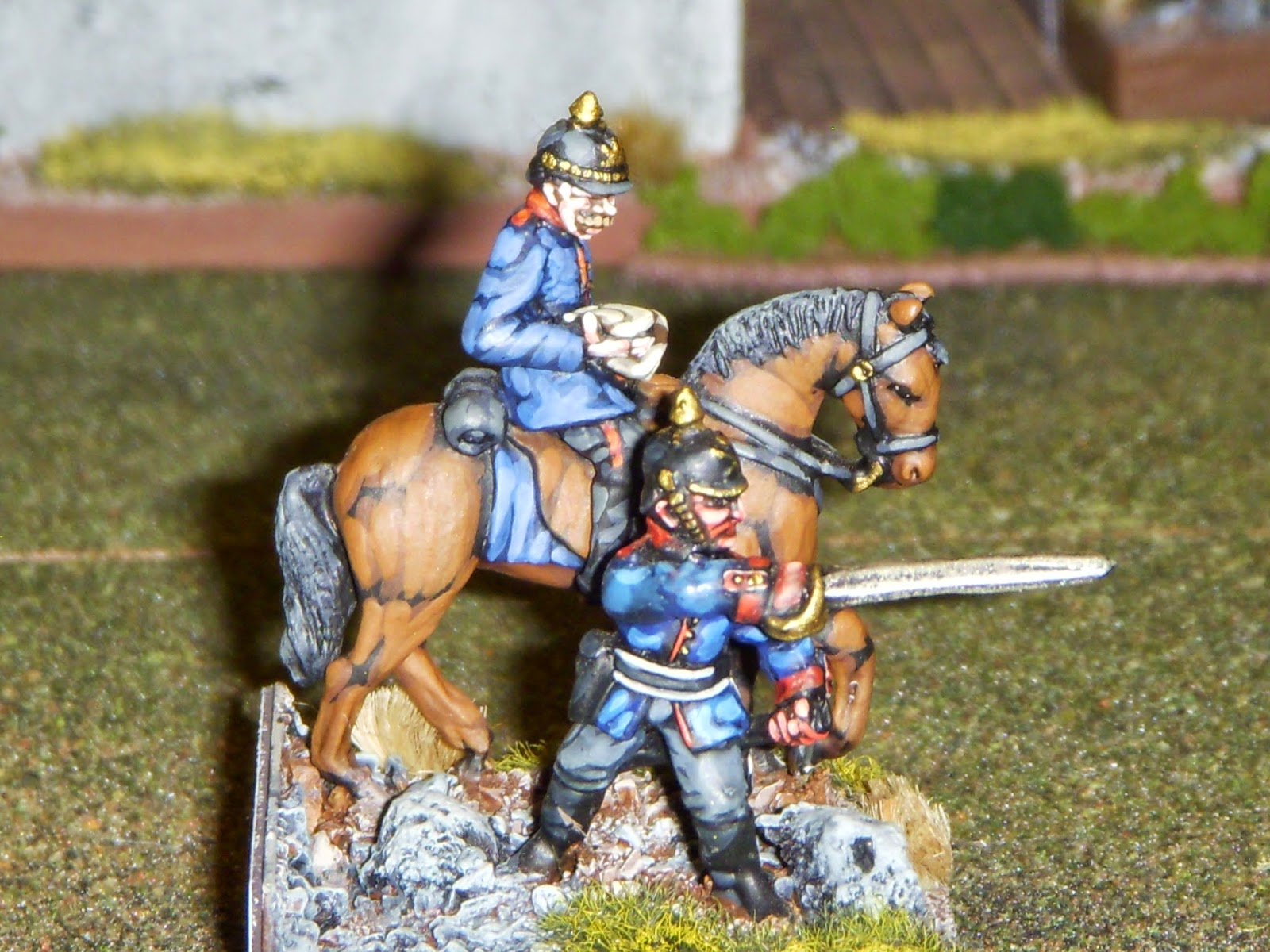 Divisional commander Budritzki looks at his map, trying to understand where all the French came from! 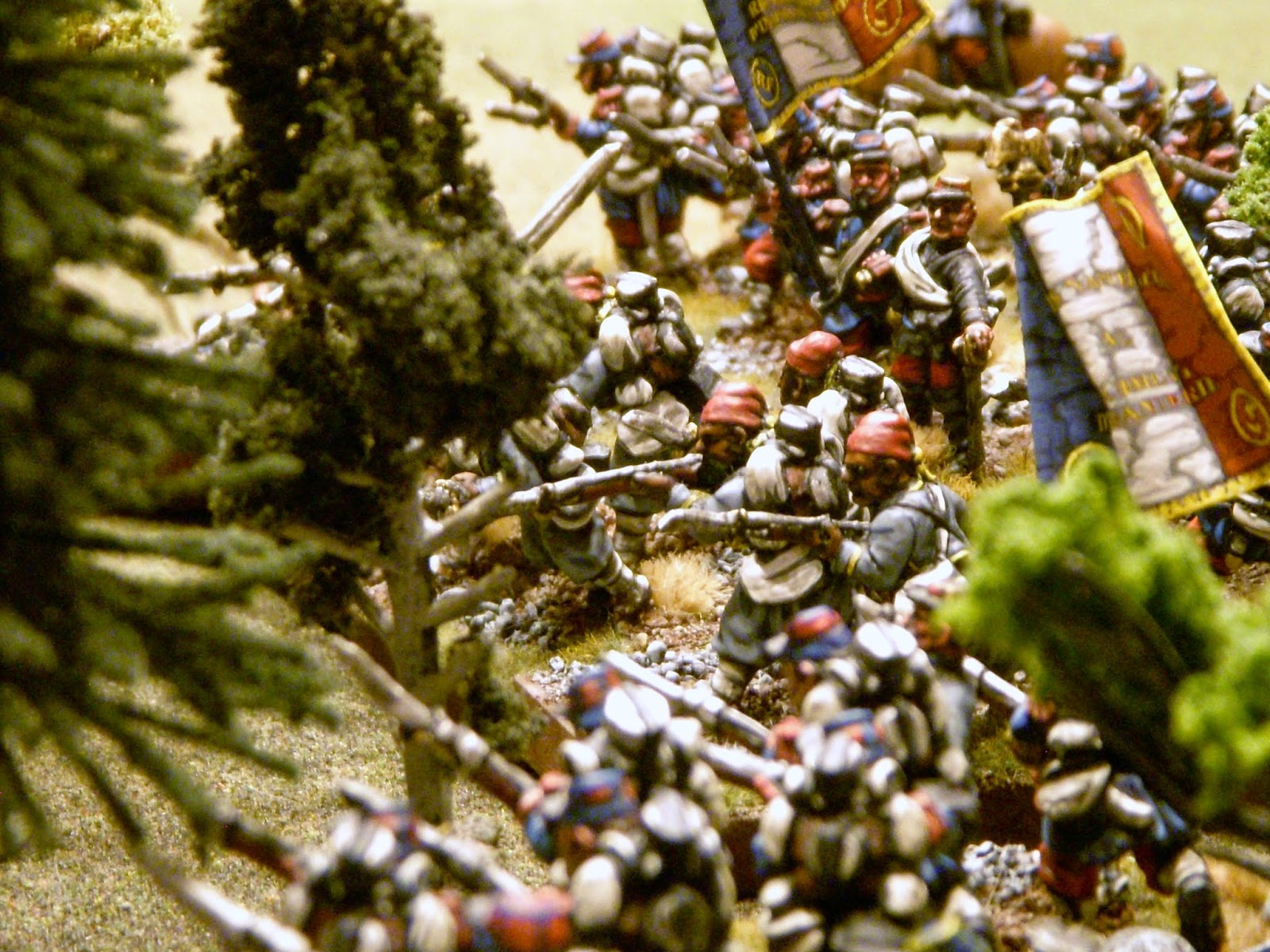 More and more of the French army poured into the Class III woods, eventually wrestling it away from the Prussians. 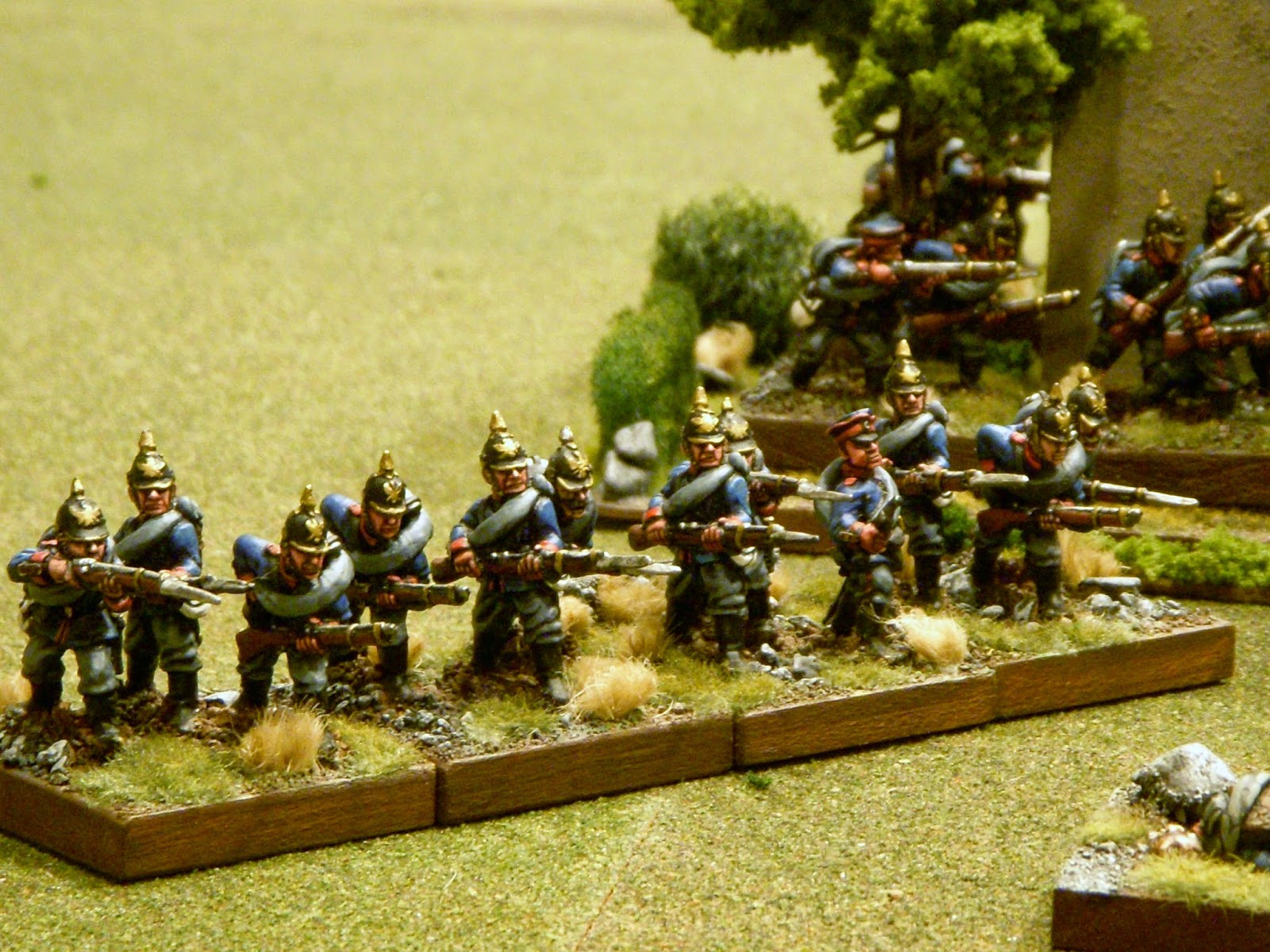 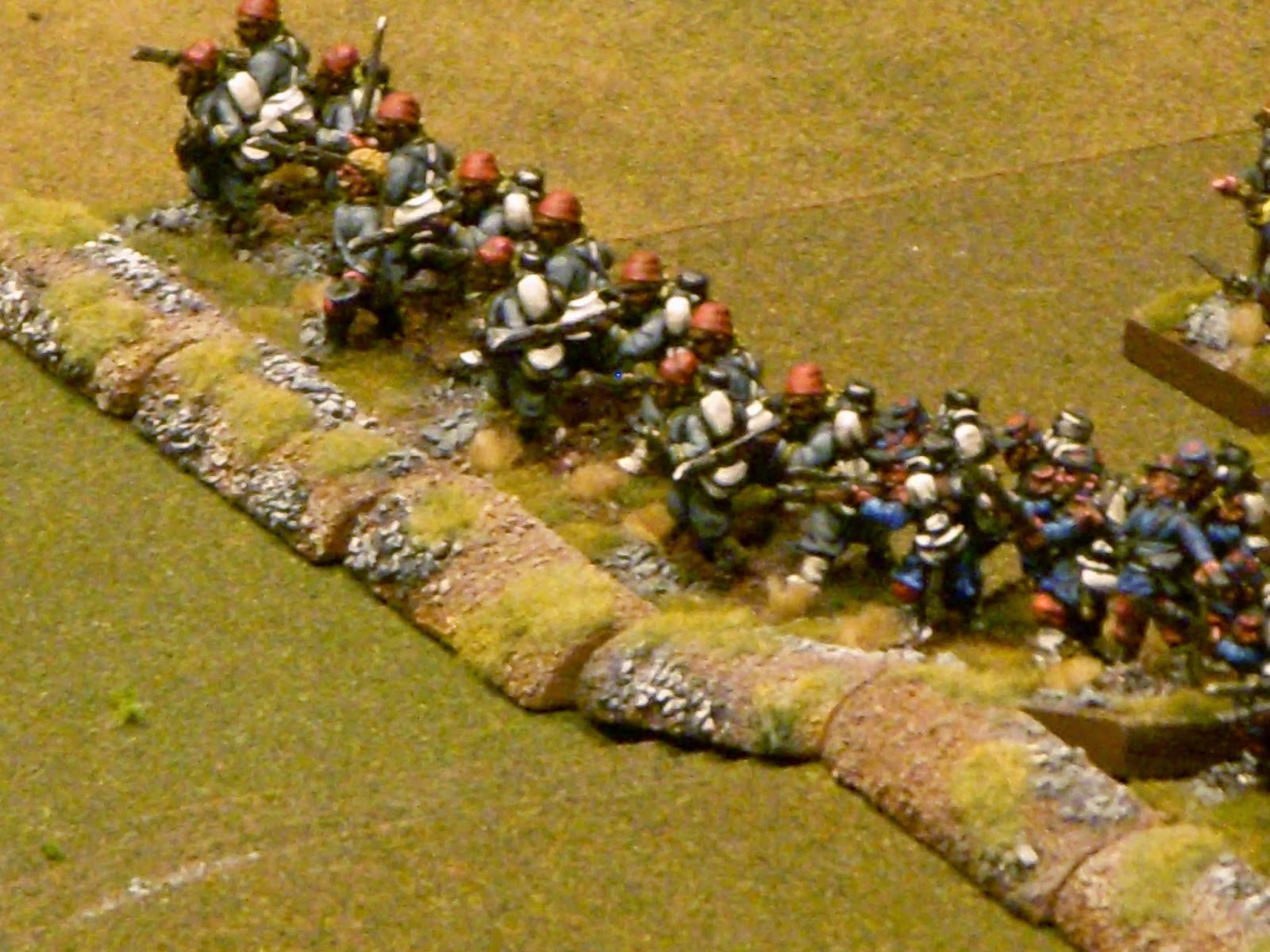 I apologize for the slightly blurred photos of French regiments deployed behind their hasty works.  This was taken to show the first use of hasty works in our campaign!   The French "dug in" on their right, and the Prussians elected to not get shot to pieces in a bloody assault.

So - the campaign now stands at 10 VP's each.   We elected to continue the season to game 4 to have a season winner.  As it turned out, the new battlefield is exactly the same as this battlefield from game 3!  It will be fascinating to see how the armies deploy differently in the next game, having learned from game 3.

The campaign system continues to work well.   Just a few minutes after the game, and ready to roll for the next game.  Minimal paper work, no real time commitment - the BEST way to keep a campaign going.

So, there you are.  Battle 4 on the bloody battlefield of Battle 3.  There and Back Again!
Posted by Brent at 6:17 AM 4 comments:

The battlefield terrain is unusually "thick" for the upcoming battle - quite a bit of terrain, and a fair amount of difficult (III) woods.

The French are on the right side - the edge with the two tiered hill. 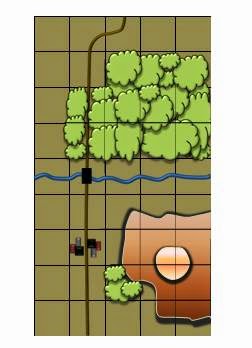 The game is tomorrow afternoon - it should be an interesting situation!
Posted by Brent at 9:37 PM No comments:

I've been a bad, bad, blogger.  I've been busy with various things, and something had to give.  In this case, it has been the blog.   We've had pretty regular game sessions, but my blogging hasn't kept pace.

In fact, we're playing game 3 in a Franco-Prussian War campaign this Saturday.  So far, game honors are 1 for the Prussians (10VP), and 1 for the French (6 VP).

The last game was a French victory - a few photos follow below: 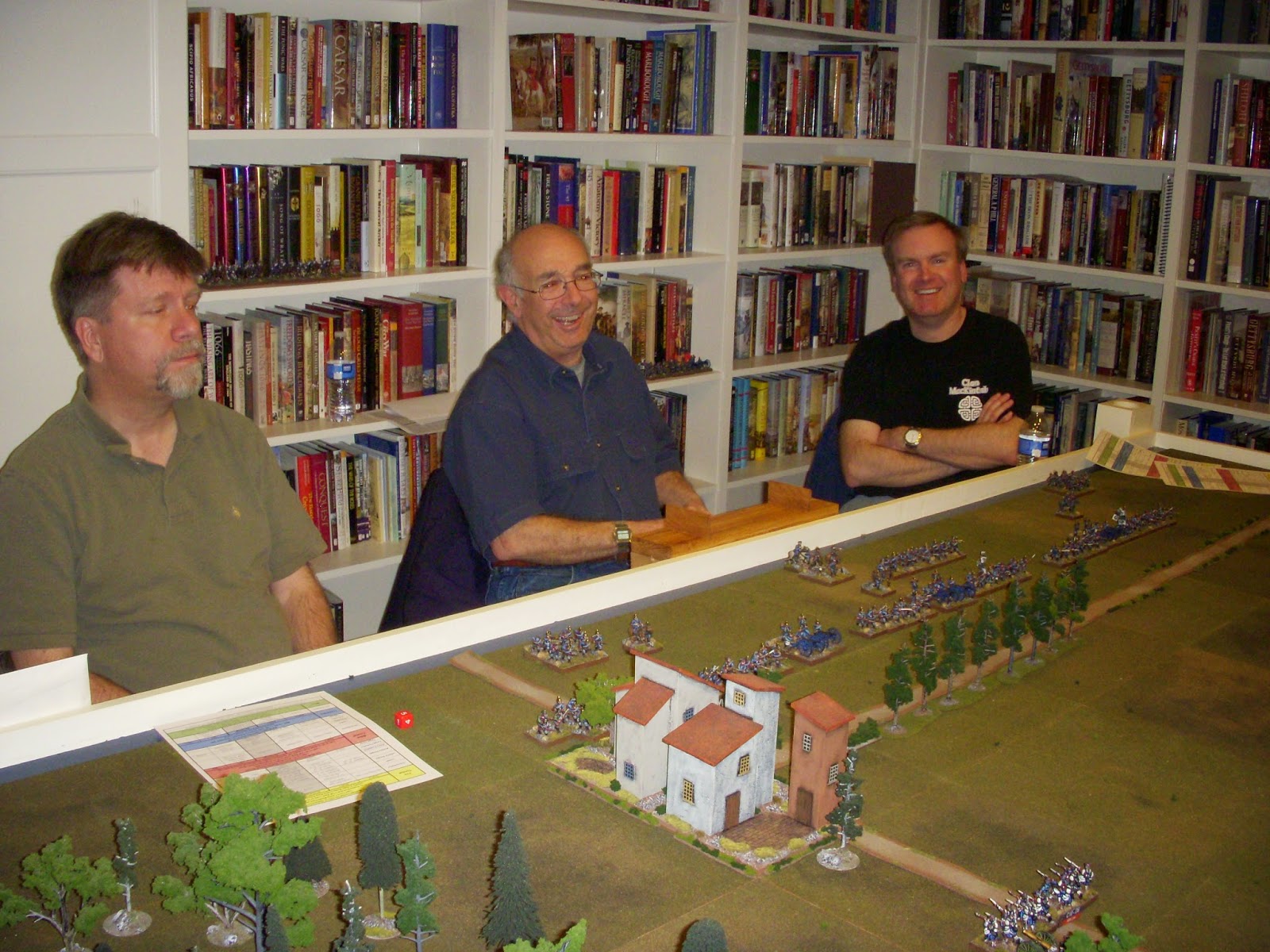 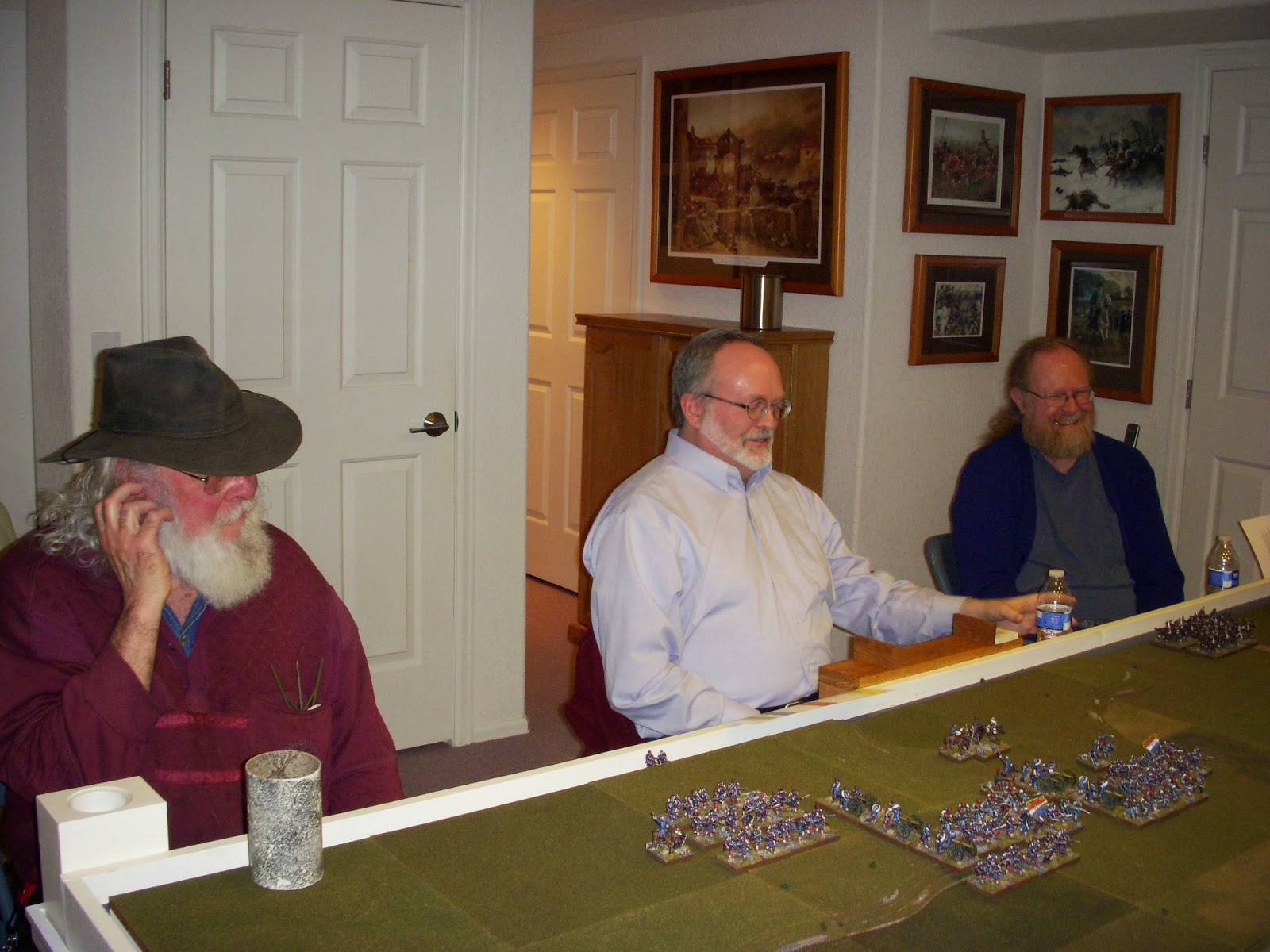 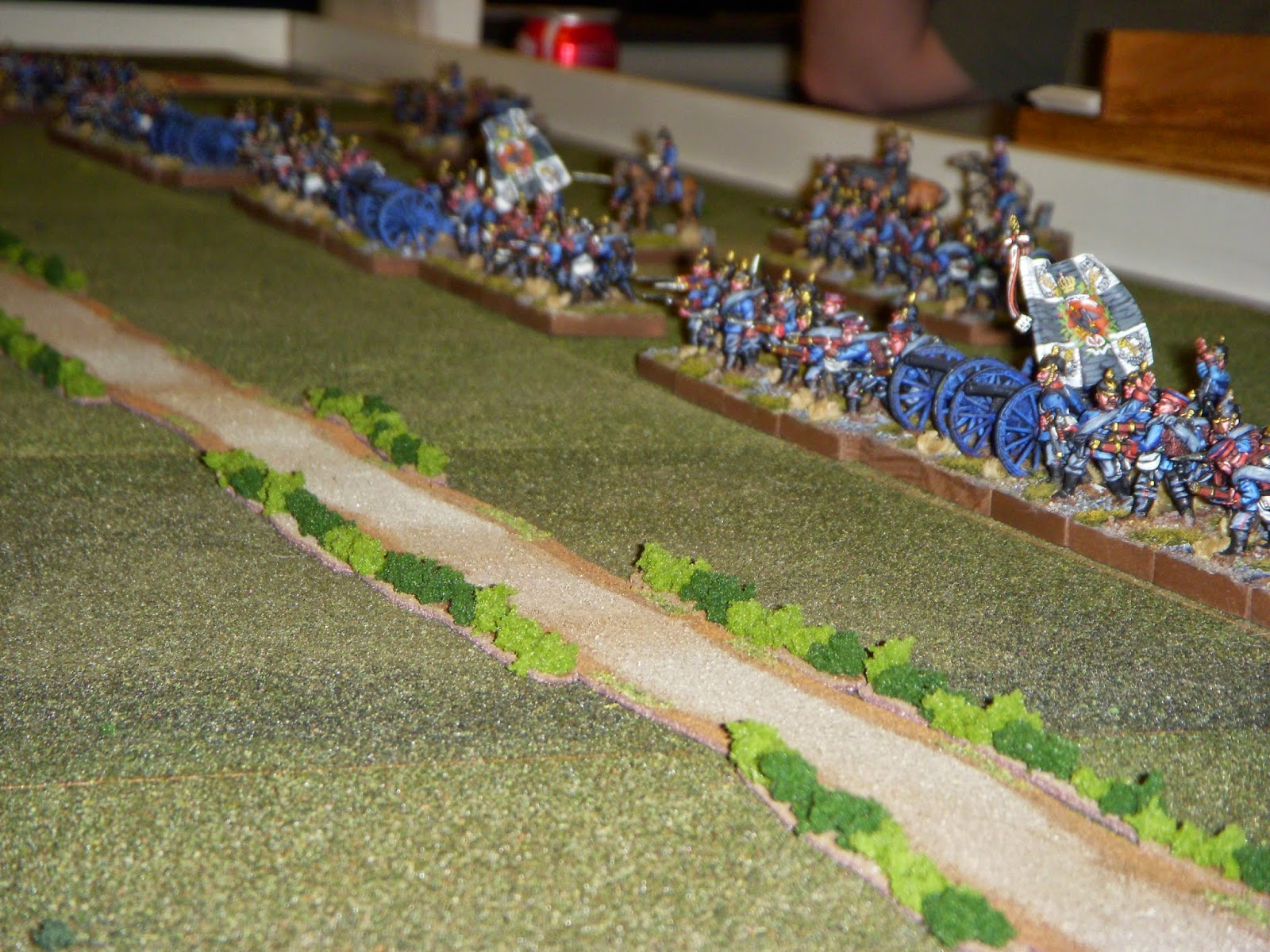 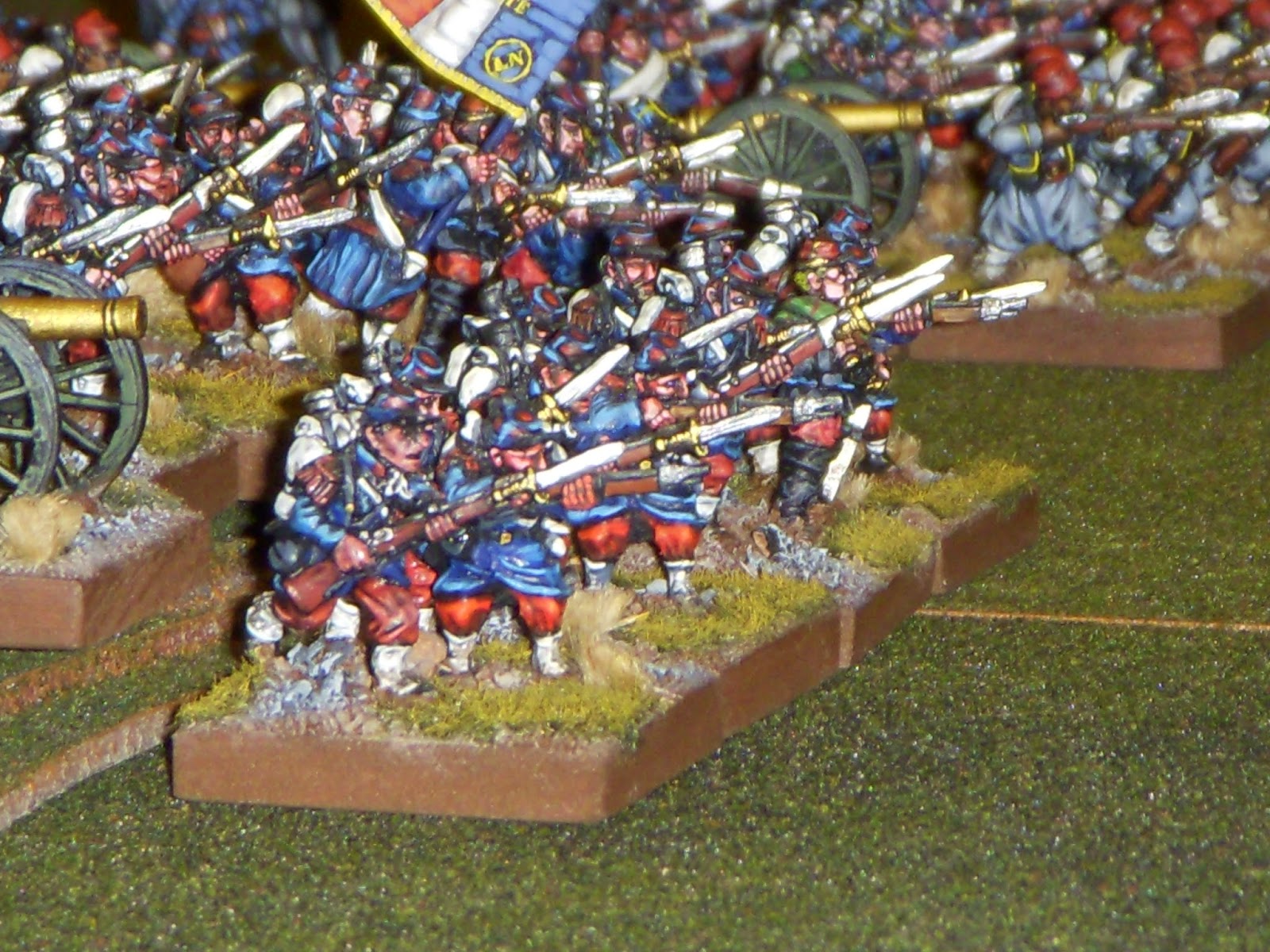 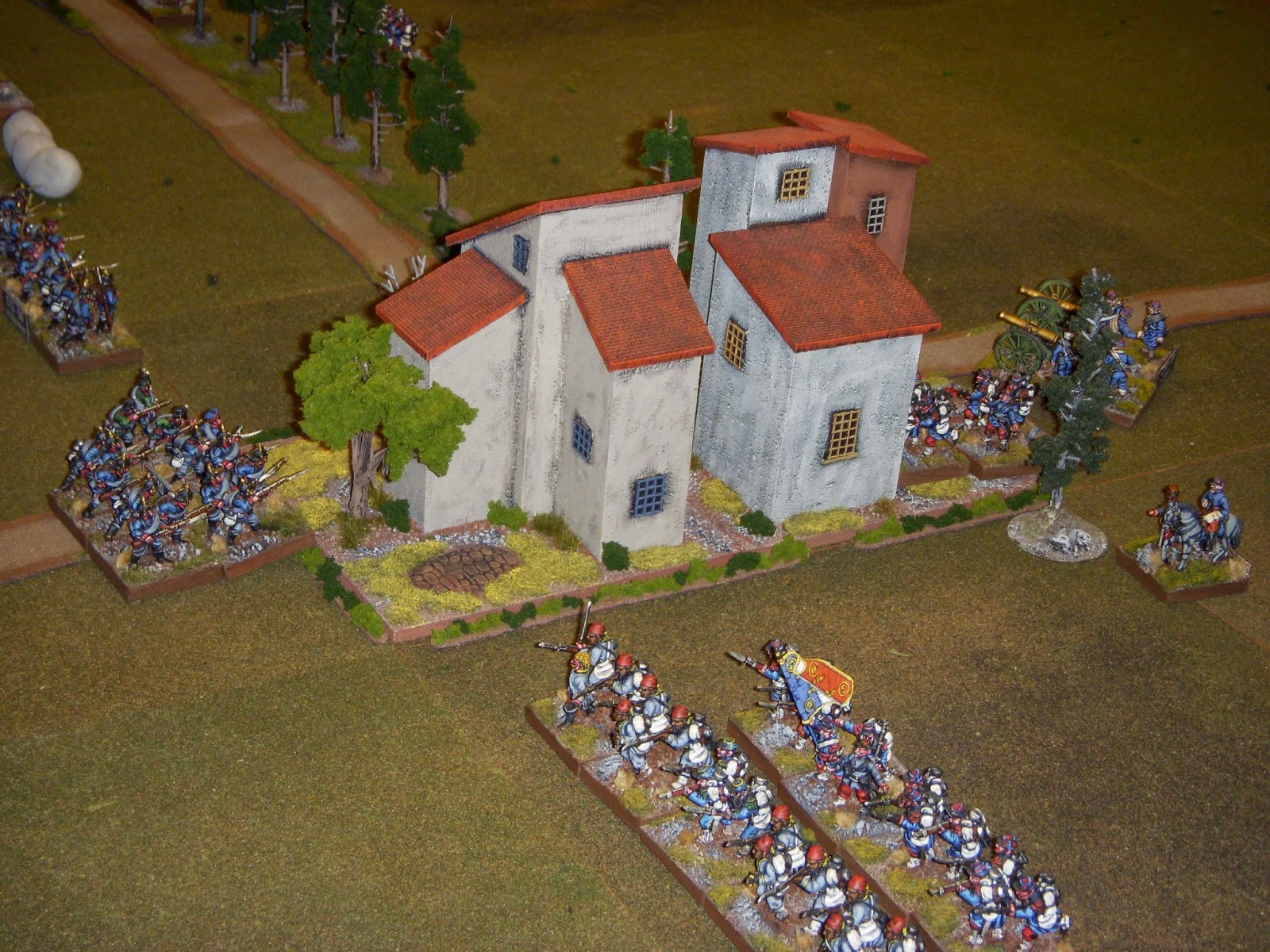 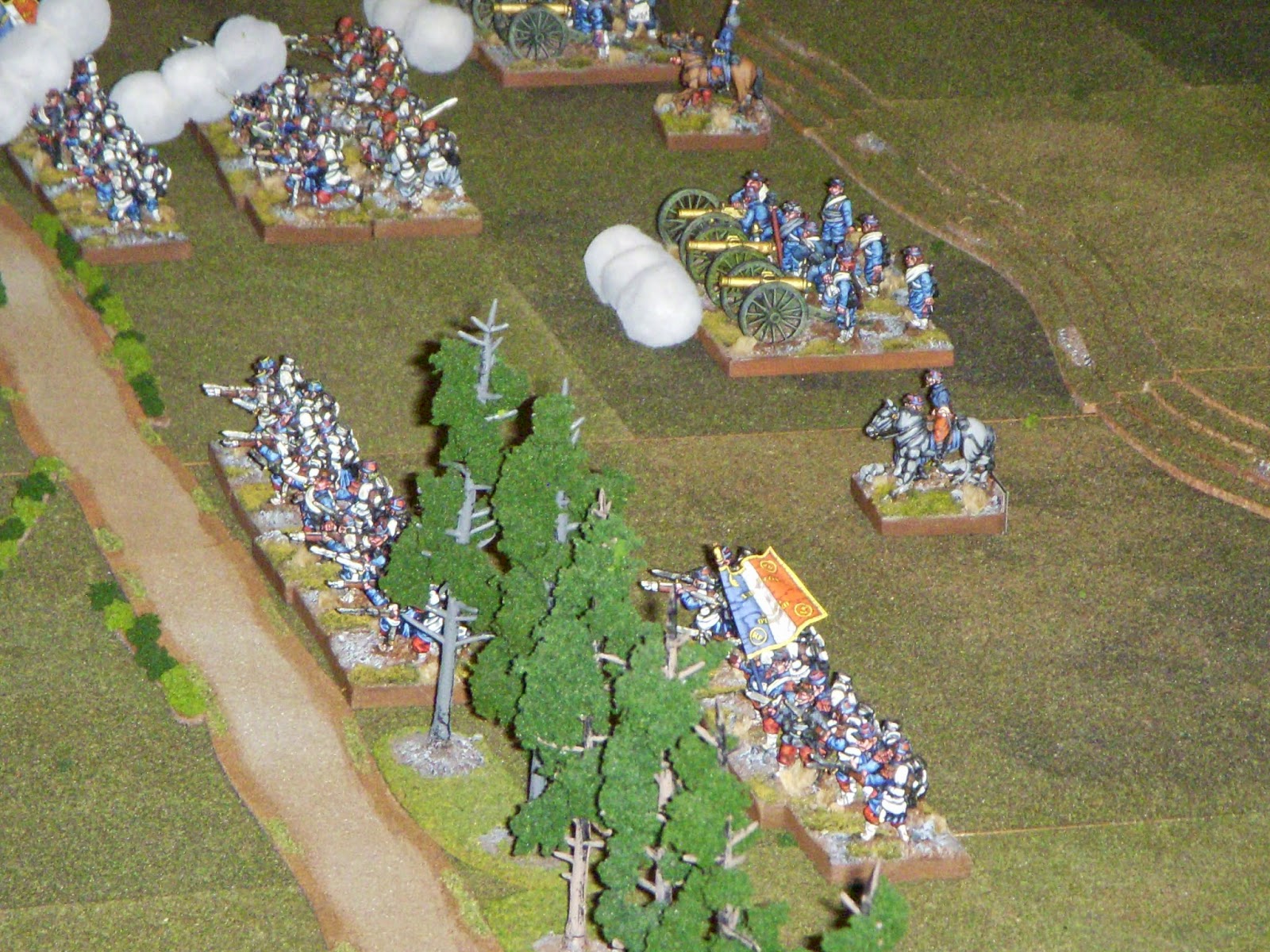 So - we're on to game 3 of the campaign this Saturday.  I have a pretty robust campaign system that I've developed that seems to work well.   All I need to do is write it up and complete the card deck artwork, and it could be ready as a product.   The beauty of the system is that it doesn't take any substantial time to do, you resolve the process for the next game immediately after you finish the present game, and it creates ongoing battles and unit character.   I'm really happy with it.

On a final note, I've cracked the problem with Blogger.   Use Google Chrome!   No problems when using the "right" browser - no problem loading photos, etc.   So, with that irritation solved, I'll try to post more frequently.
Posted by Brent at 4:04 AM 7 comments: