Book Review: With Zeal and With Bayonets Only

"With Zeal and With Bayonets Only: The British Army on Campaign in North America, 1775-1783" by Matthew H. Spring.

What can I say?  This is simply a magnificent work.  If you have ANY interest in the AWI, you should read this.

This isn't a campaign, or battle history.  Its about the inner workings of the British army, with tons of snippets sprinkled throughout to give a flavor for the action.  If you want to know "how things work" - buy this book....NOW.  I think its on Amazon for around $18 in paperback now.

The chapters will give you some idea of the contents:

I've come away with a greater appreciation for the challenges faced by the Brits, as well as the flexibility in their tactical abilities.

Buy this book - you will not be disappointed.
Posted by Brent at 8:52 PM 2 comments:

We had a great, unique FPW game last night.  Chris' friend, Mike LaVigne was in town, and was able to make the game.  I believe it was the first time he's played Field of Battle, or seen Field of Battle played.

The scenario generated by the player's decisions resulted in a Prussian force outnumbered by 20% deployed essentially across the short end of the board, primarily behind a Class II railroad embankment.  The French had deployed across most of the table width, so 2/3 of their army had a long march to get to the engagement. The Prussians were outgunned, with 1/2 of their artillery not making it to the battlefield.  Obviously the Prussian army was in no mood to fight...rolling up only 15 Army Morale Points, to 24 for the French.

The Prussian 2 right command groups were pushed over the railroad and toward the French left flank wood on their baseline.  A stiff fight resulted between the Prussians and defending Turcos.  Most of the Army Morale Points lost by both armies were lost in the fight for the woods. 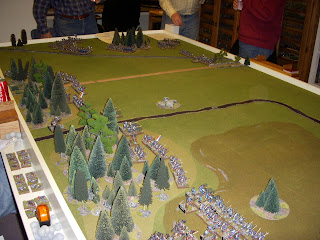 The initial deployments.  The French army is deployed across the table (left side of photo)...the Prussian army is way, way down on the end of the table... 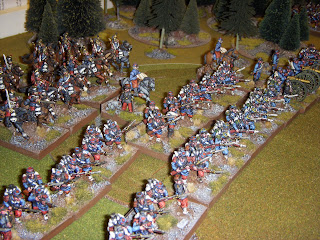 French commands on their right flank 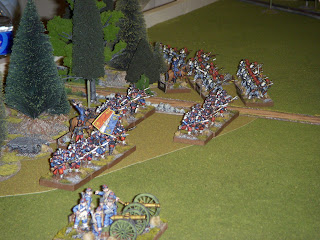 French commands in the woods on the French left, soon to be under attack 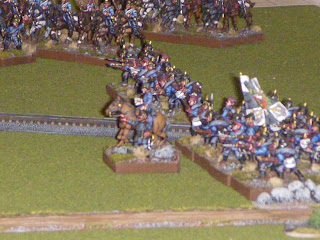 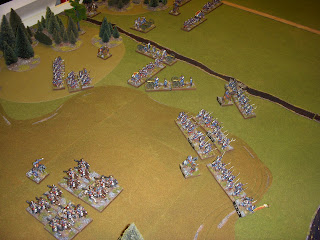 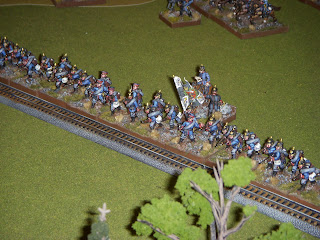 Prussians deployed behind the Class II cover of the railroad embankment 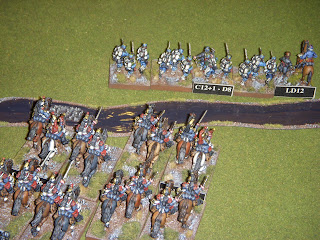 French cross at the ford 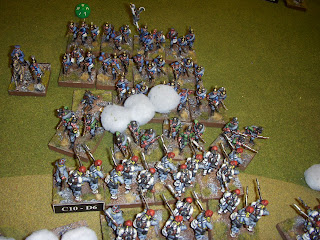 Prussian attack begins to falter as the Turcos bloody the Jaegers 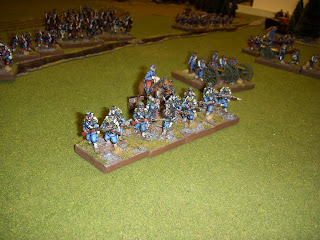 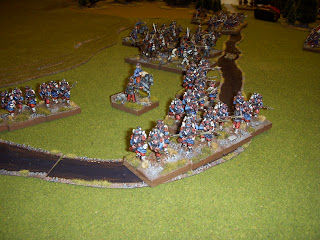 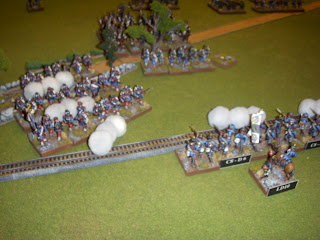 The end comes quickly for the Prussian left flank as the French under Genl. "Triple Move" Mumby close in.  There used to be Prussian infantry in the gap at the railroad...they're routing now, out of the photo. 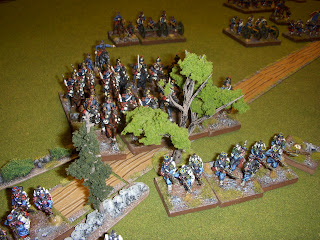 The French reserves ready to crush what remains of the Prussian left flank.
Posted by Brent at 9:58 AM 10 comments: