I'm reading a fascinating book by Earl Hess - "The Rifle Musket in Civil War Combat, Reality and Myth".   Hess follows very much in line with Paddy Griffith's earlier work, and convincingly lays out evidence that the rifle musket did very little to change battleline combat ranges.  A combination of visibility, unit control, tactical decisions, terrain, and weapon ballistic characteristics, made the rifle musket battleline engagement ranges somewhat longer, but still appreciably short of what the weapon's capabilities were.   I don't have the exact number, but he suggests that the average battleline engatement range was around 90 yards, vs. 60 to 70 in the Napoleonic era.

BUT - the big difference was that skirmishers and snipers now had a much more capable weapon, and used it with effectiveness.   The skirmish ranges would be 200+ yards, with skirmishers deployed from 100/200 yards in front of the battleline to as much as 500 to 800 yards!

Hess points out that the Federal armies had a distinct skirmish advantage when compared to the Confederates in the Western theatre.  In particular, he spends considerable time discussing the Atlanta campaign, when skirmishers really came into their own.   Part of the Federal advantage was leadership and an emphasis on skirmishers, while part of the Federal advantage was that they had the supply system in place to provide plenty of ammunition for the skirmshers to fire off!  Confederate units labored under ammo limitations, and fired distinctly lower numbers of rounds.

I started thinking about representing skirmishers in Field of Battle.  I truly think wargame rules get skirmishers wrong.  In my opinion, they're best represented as an abstracted benefit.  Its very difficult to model one of their primary functions - intelligence, being the "eyes and ears" of a unit.

I think the best way is to look at unit ranges over the horse and musket period.   From "bad" skirmishing or non-skirmishing Napoleonic systems and earlier (SYW, WSS), I can broadly say that there aren't significant skirmishers.   They'd use the battleline vs. battleline model, with roughly a 100 yard range.

As you get the "good" Napoleonic skirmish units (French, British, later Continental armies), that range doubles, as a skirmish screen proceeds the battleline.  So, let's say the range is 200 yards.

The longer ranges are abstracted in game terms by the long range of the units.   I'd propose that an interesting tweak to Field of Battle would be to disallow long ranges for units that were "out skirmished.   I tossed the graphic (below) together to illustrate my thinking.

I need to stop messing with this and get back to editing Pulse of Battle! 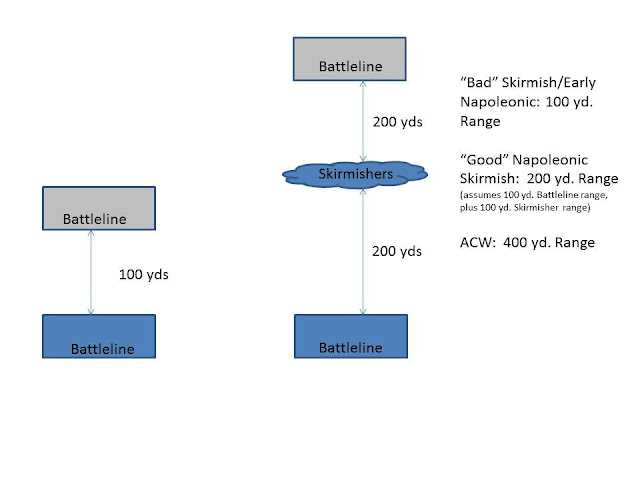 I haven't been posting many updates lately, as I've been focusing on using my free time to work on writing on Pulse of Battle.   I chuckle when I see the "One Page Rules" discussions on The Miniatures Page.   Hmmm.   One page rules.   What they really mean is 1 page reference sheet.   It's quite impossible to have a 1 page set of rules.  There are sooooooo many situations and questions that players have when playing a game.  I'm not saying that my rules are exhaustive, but they are aimed at being precise, concise, and easy to use/comprehend.    You can't do explanations in one page for everything.....

We played a final set of test games last Saturday with Pulse of Battle.  Two games, 2nd Punic War.   The Carthaginians had the advantage of a large leadership advantage, and somewhat better troop quality.   They won both games, which wasn't too much of a surprise.

I'm very happy with PoB now.  Only a couple of minor fixes popped up in the game, and the games played really well and smoothly.

PoB is now in the edit phase.  It's in the hands of 4 thorough and capable editors, who are providing tons of edit suggestions to me.   I think this set of rules will be by far the best edited, "cleanest" set that I've done.

That being said, I'm sure I'll see errors and typos when the first printed copy arrives!

A couple of photos from the games: 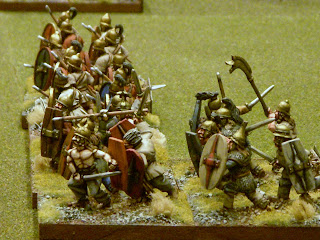 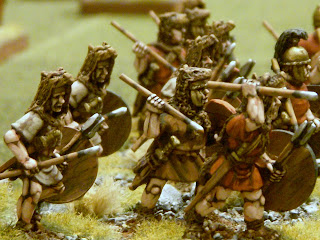 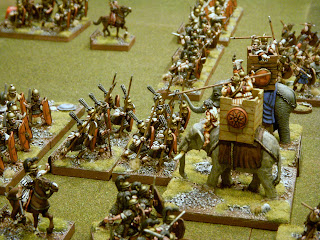 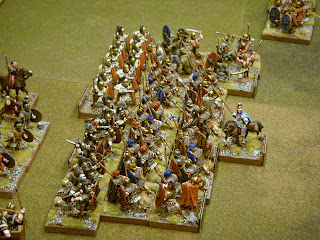 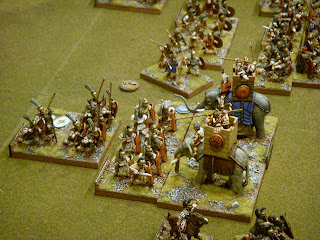