Let's see.  Another Sunday, another Broncos' loss.  This time to the SF 49rs, quite possibly one of the most ordinary, worst teams in the league.  At this point, I have to believe that the Broncos are the worst or next to worst team in the league.   I'm going to officially send a suggestion to Bronco headquarters that the team name be changed to "Denver Debacle", with a train wreck as the new logo.

I have no idea where to start....the defense is pathetic.  I have no idea what the defensive philosophy is.  The 49rs were starting a guy at QB that had only 2 other games under his belt, and made him look like an all pro in the 2nd half.   Knowing that the Niners wanted to run the ball, the Debacle played a vanilla 3-4 and didn't press the line of scrimmage.   It seems like any defensive coordinator with a brain cell remaining would have recognized the limitations of the Niners and played tight man coverage on the outside and 8 in the box to stop the run.  Not good old Wink!   Apparently, the Debacle needed to play a soft zone due to the passing excellence of Smith, or Jones, or whatever his name is.  Please.

Offensively, yet another statistically good game by Orton, who turned in an Ortonary performance on the scoreboard.   Orton specializes in racking up yards between the 20's, but seems paralyzed when it comes to pulling the trigger and making a play in the red zone.  He's athletically limited, and has no chance when a play breaks down.

The Debacle goes into their bye week.   Or is that "bye bye" week to the season?

I see NO ALTERNATIVE to benching Ortonary and playing Tim Tebow.   I'm not saying he's ready to play, but he can't produce fewer wins than Orton, and the season is obviously over.  Time to season Tebow for next year.

The Nuggets and Avalanche are doing well though....
Posted by Brent at 2:27 PM 4 comments:

I had a few sample Battle Honors (25mm) figures on hand, so I thought I'd toss some paint on a couple and see how I liked them.  A couple of photos of the test follow below. 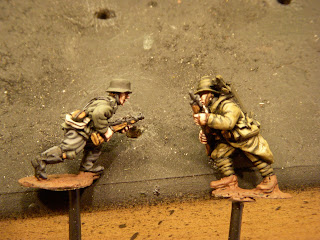 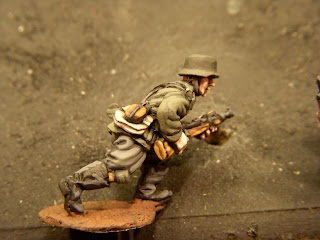 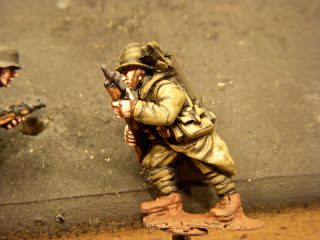 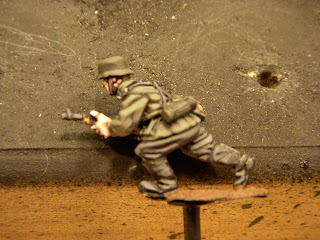 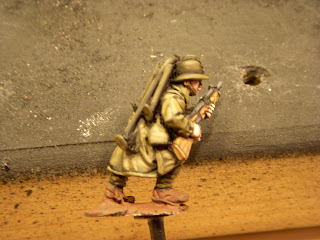 I "think" I like them.  The Battle Honors figures have a lot of animation, but are a bit trickier to paint because of some of the extra folds and creases included on the arms and legs.   My other option is to use Crusader, if I do this period.  From the photos I've seen, Crusader figures look to have relatively little animation...not sure what that would look like in unit groupings on stands.

"The Fall of France" arrived yesterday (by Julian Jackson).  A quick glance through it showed it to look pretty interesting.   I'll add that to the reading list.  Right now I'm reading "Soldiers and Ghosts" by J. E. Lendon.  Subtitled "A History of Battle in Classical Antiquity", I'm using it to get in the mood to finish up work on "Pulse of Battle".   Did I say finish??
Posted by Brent at 4:45 PM No comments:

Same rating scale as for books.

The brutal fact is that the Broncos SUCK.  The clock has officially started on the "Fire Josh McDaniels" watch.   I've never seen a professional football team so poorly prepared and motivated.  Its halftime vs. the Raiders (BARF), and the score is Raiders 38, Broncos 7.

Any head coach that can make Tom Cable look like the 2nd coming of John Madden should be fired at halftime.   I'm embarassed to have supported McDaniels in the past.   His teams are soft, poorly disciplined, and mentally weak.

I'll get a bit more organized with my book reviews/recommendations from here on.   The new scale, using the sliding die size scale familiar to Piquet players:

D4:  I can't recommend this book.  Save your money for gasoline, figures, or another book.  I won't save space on my shelf for this turkey.

D6:  Some redeeming qualities.  Questionable facts or conclusions.  A difficult read.  I'll keep it, but will probably only use it for a research resource.

D8:  A solid recommendation.  Not the best, not the worst.  I learned something I didn't know before.  Something just wasn't there that kept it from getting a higher rating - maybe bad maps, bad editing....just something that held it down.  This book could be recommended for those interested in the specific topic.

D10:  A really enjoyable book.  Good writing, interesting topic.  Good feel and appearance.  Nice maps, etc.   A definite recommendation, even outside of a period you might normally be interested in.

D12:  WOW!  Great writing, an easy read.  Inspirational - I can see the games this will lead to.  Where is that figure catalog?  A recommendation without reservation.   I'll read this again and again.

So - on to the first reviews!

An odd title...just short of "Hitler's Mighty Army" or some such drivel.  I almost didn't pick this up at the bookstore because of the title.  I'm glad I did though - its about the France 1940 campaign, and the contributions to the German victory by Manstein, Guderian, and Rommel.  Alexander's writing style can sometimes be a bit stilted, but it is a pretty quick read.  With few books covering this period, it serves its purpose as an introduction.  Not detailed at the tactical level, but there's enough meat there to come up with some scenarios.   Rather than being inspirational, I found the campaign to be depressing to me.  Only the French army of 1940 could make the Army of the Potomac in 1861/62 look well led!   I had been contemplating doing France 1940 with 25mm, but now I don't think I will.   I'm not sure that the campaign holds much tactical interest for me.

This book has elicited some pretty heated opinions.   Tucker spends a good chunk of the book (maybe 25%?) discussing slavery and the possibility of economic gain as the reason for expansion into Texas.  OK, OK, I get it already.  Early on in the book I felt like I was getting hit over the head again and again with a pretty heavy handed message.  However, I'm glad I stuck it out.  About midway through the book, the study turned to the "siege" and then assault of the Alamo.  Tucker makes some quite interesting statements and conclusions about the "battle" - or almost total lack of - in the final assault.  His discussion of the action outside of the Alamo's walls are particularly interesting.  While some have said that this is nothing new, I haven't seen it explored in this depth, or with such conviction.

I enjoy The Miniatures Page (TMP).  There are often posts that lead to investigations of things I wouldn't have imagined, or links to interesting sites, tips, book reviews, etc.   But....there are always the posts...you know which ones.....they go something like this:

I'm building a 28mm Napoleonic Spanish army for use with Volley and Bayonet, and I'm wondering what the best source of uniform information might be?

Spanish?  Why would anyone want to collect the Spanish?

I hate Volley and Bayonet.  I only play Shako.

Shako isn't any good.  If you're interested in a skirmish level game, try my new set on my web.  It's titled "Flashing Blades of Bloody Glory".

Skirmish?   You have to be an idiot to play skirmish games.  Tactical is the only way to play.   I think you're wrong using 28mm though.  Everyone knows that 10mm is the only way to go for massed games.   I use 10mm exclusively for my WW2 games.   See my blog for photos and a review I wrote myself of my new WW2 game "Hitler Drives a Big Tank".

You're all wrong!  Didn't you read his original post?   I think WAB is coming out with a WW2 set that would work for him.   Just don't use WRG - they suck.

He didn't even mention ancients.   I think Osprey has a book on the French or something.

Where can I get pikes for my Macedonians?

Does anybody know why acrylic paint dries up? 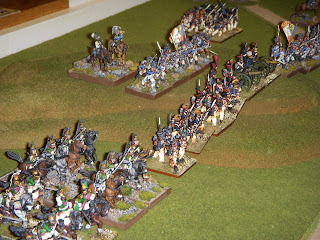 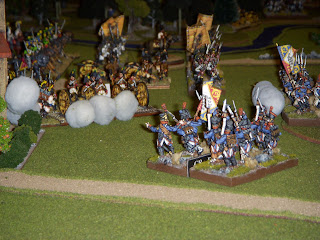 French attack closes in on the Austrian held town 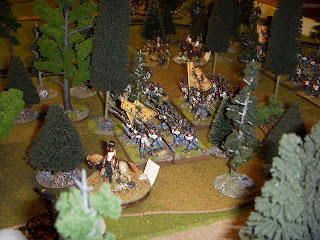 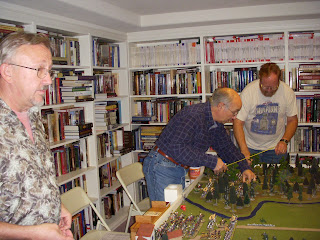 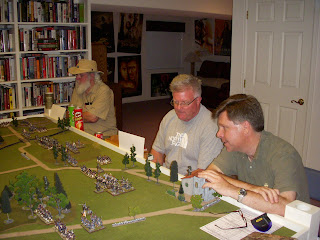 French command appears overconfident..."they're deployed just like I thought they would" 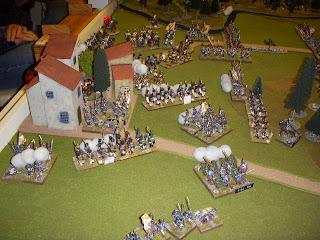 How can the French assault be repulsed? 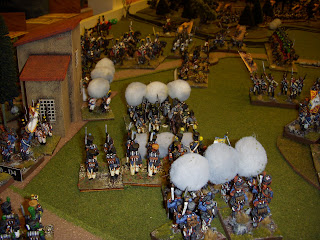 Just like that!   French suffer heavy losses and the Austrians hold the town 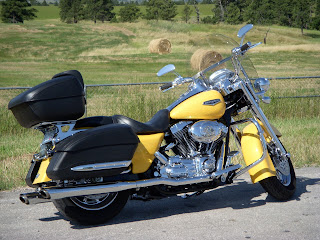 My bike near Devil's Tower, Wyoming.  Sorry...had to get a bike pic in.
Posted by Brent at 9:34 PM No comments:

We played an 1809 French vs. Austrian game about a month ago - sorry I don't have a complete report, but I don't remember much of the game details! 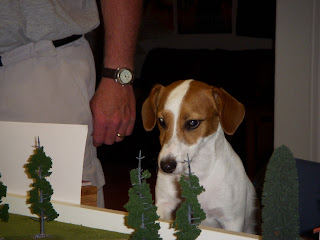 I've been working on a few writing projects, but can't really talk about the details of those quite yet.   I've also been working on some terrain projects that will be the subject of future posts.

This 1809 game was supposed to be the first of a campaign.  I have to admit, I'm frustrated with expectations and realities of campaigns.   In theory, everyone loves a campaign.  In reality, there is usually not much participation except at game time.  Excessive record keeping, lack of participation, time lapses between games - all combine to kill campaigns.  I'm more and more convinced that the best campaigns are games that are tied together only because they're in the same period, and have random situation and force generation.  In other words, you show up and do the best with what you're given.  I wouldn't exactly call it a narrative campaign, and its not a ladder campaign - maybe a "thread" campaign.  Over time, the thread of the series of games weaves a story itself, based on the game results and slant of the actions.   We did an ACW campaign like this a couple of years ago, and it worked well.