Some photos from the battle: 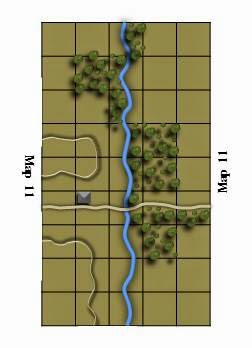 The battlefield for Munster Creek 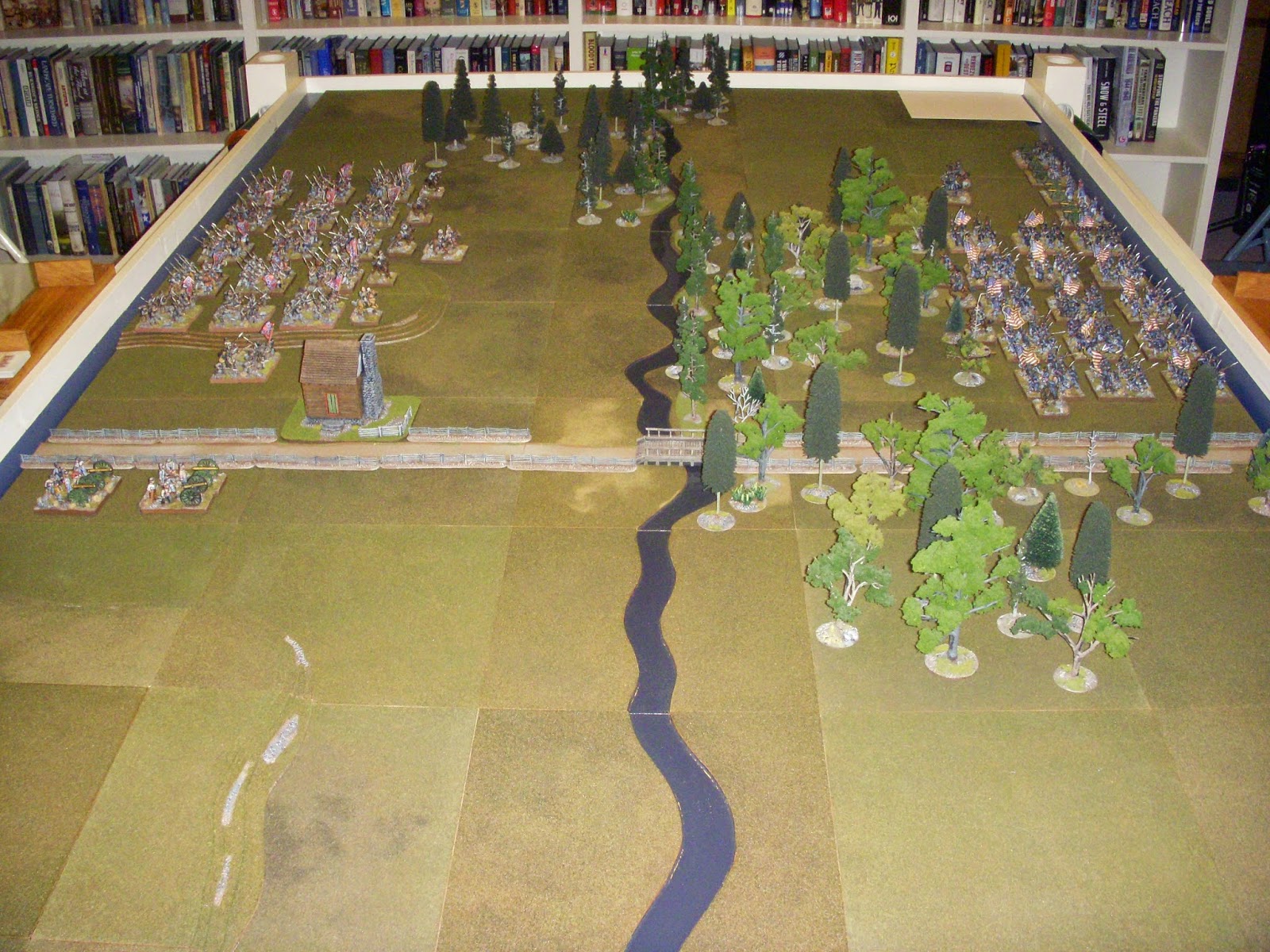 The tabletop battlefield for Munster Creek with troops waiting for battle 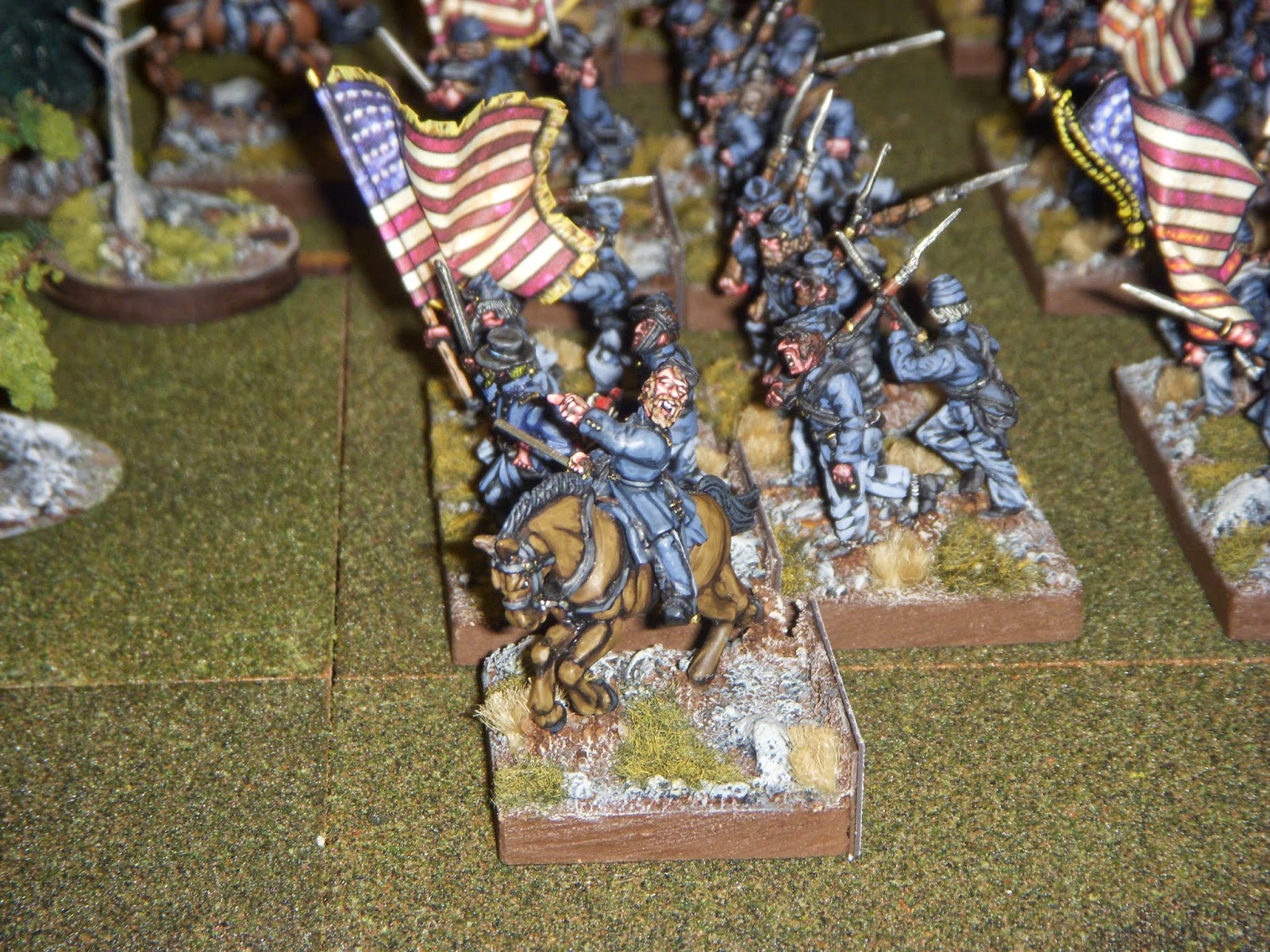 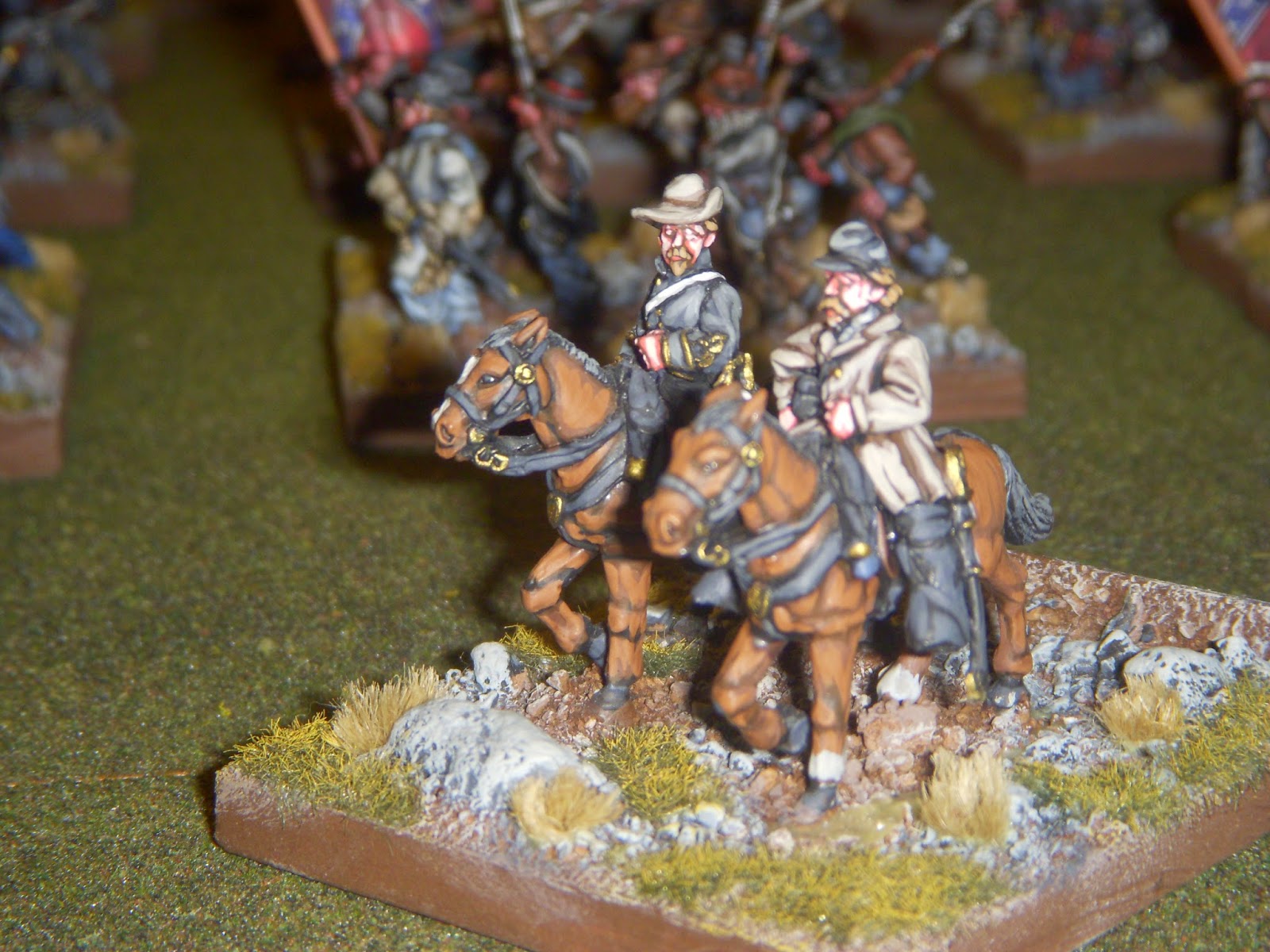 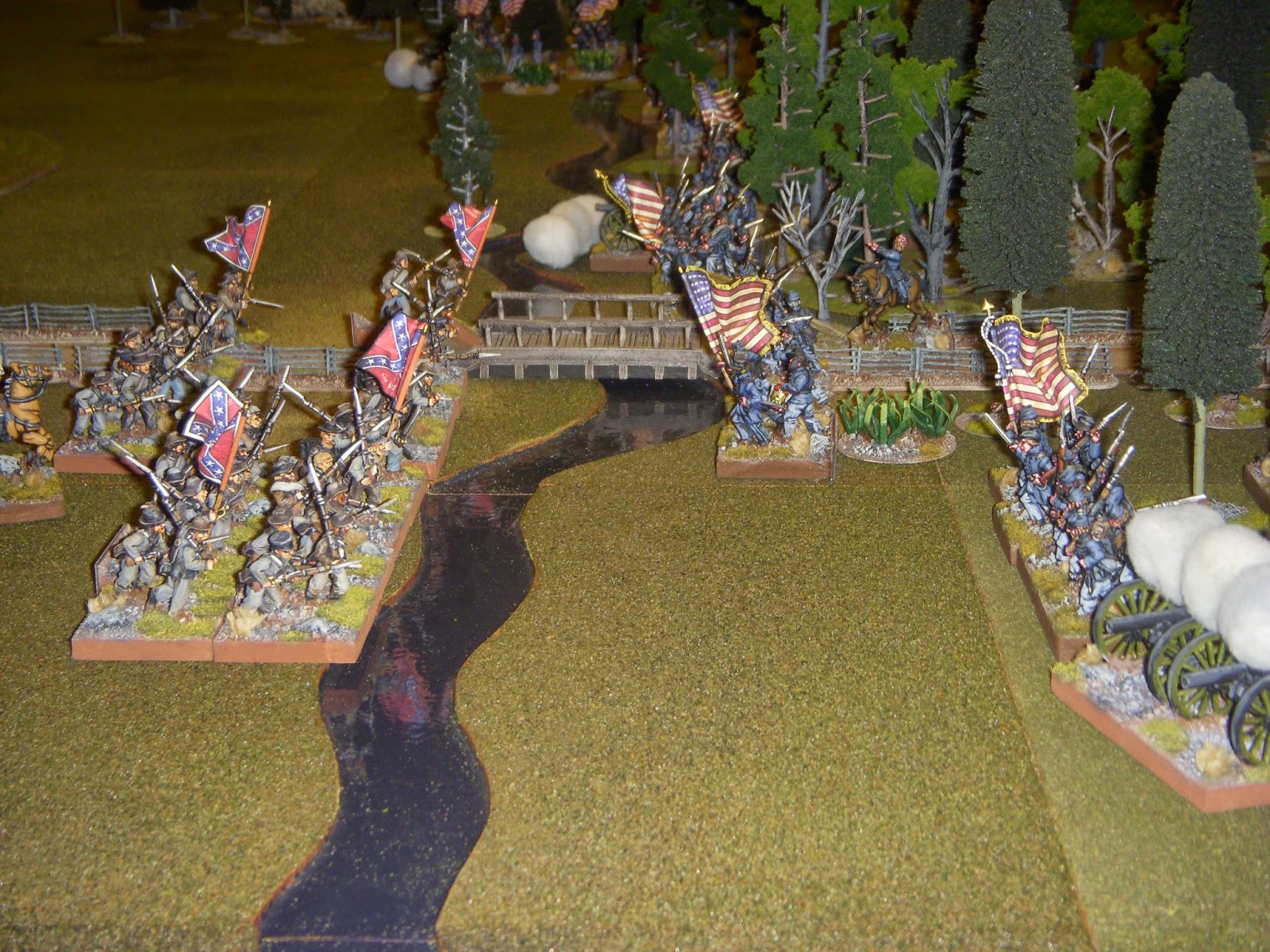 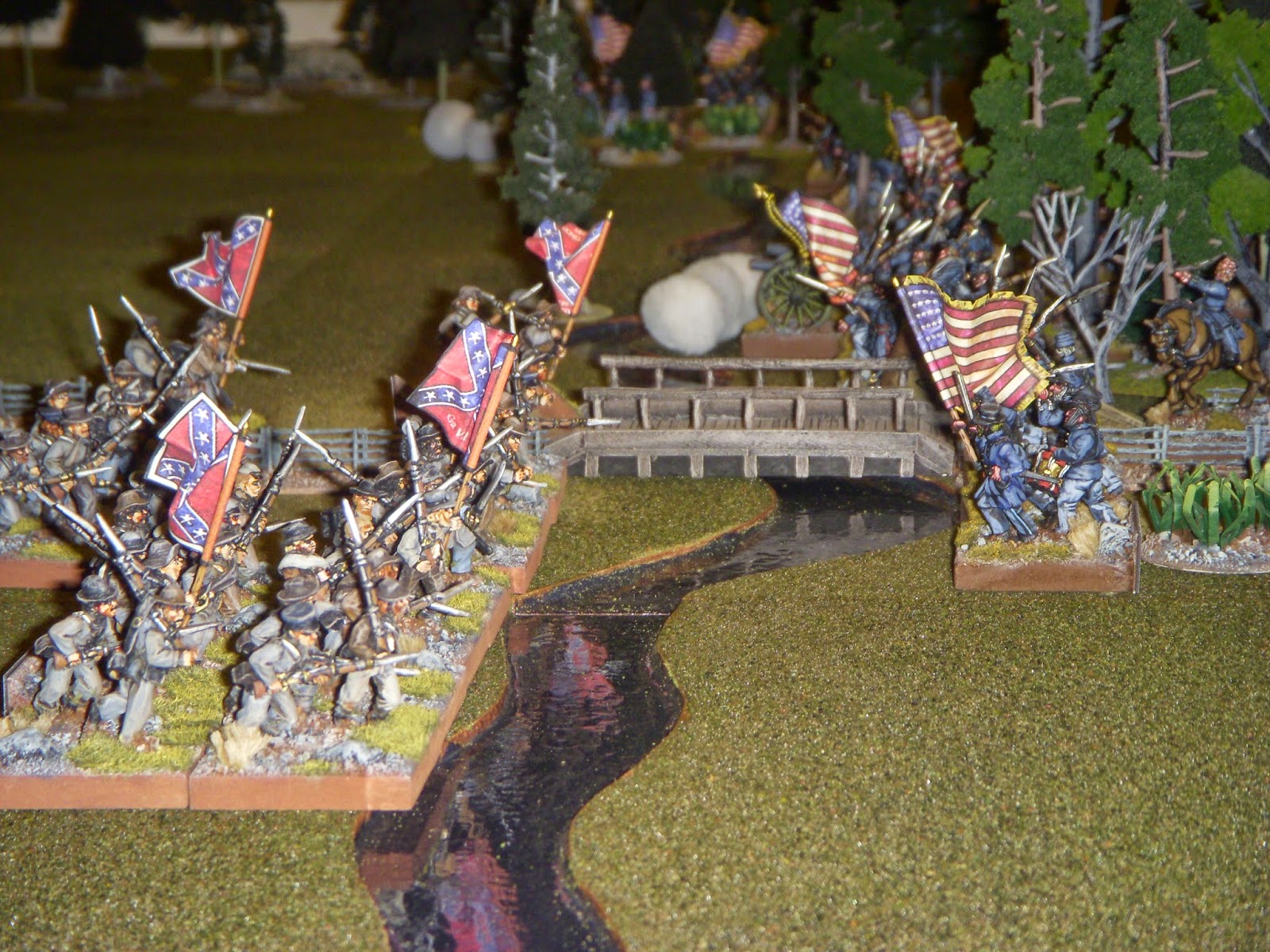 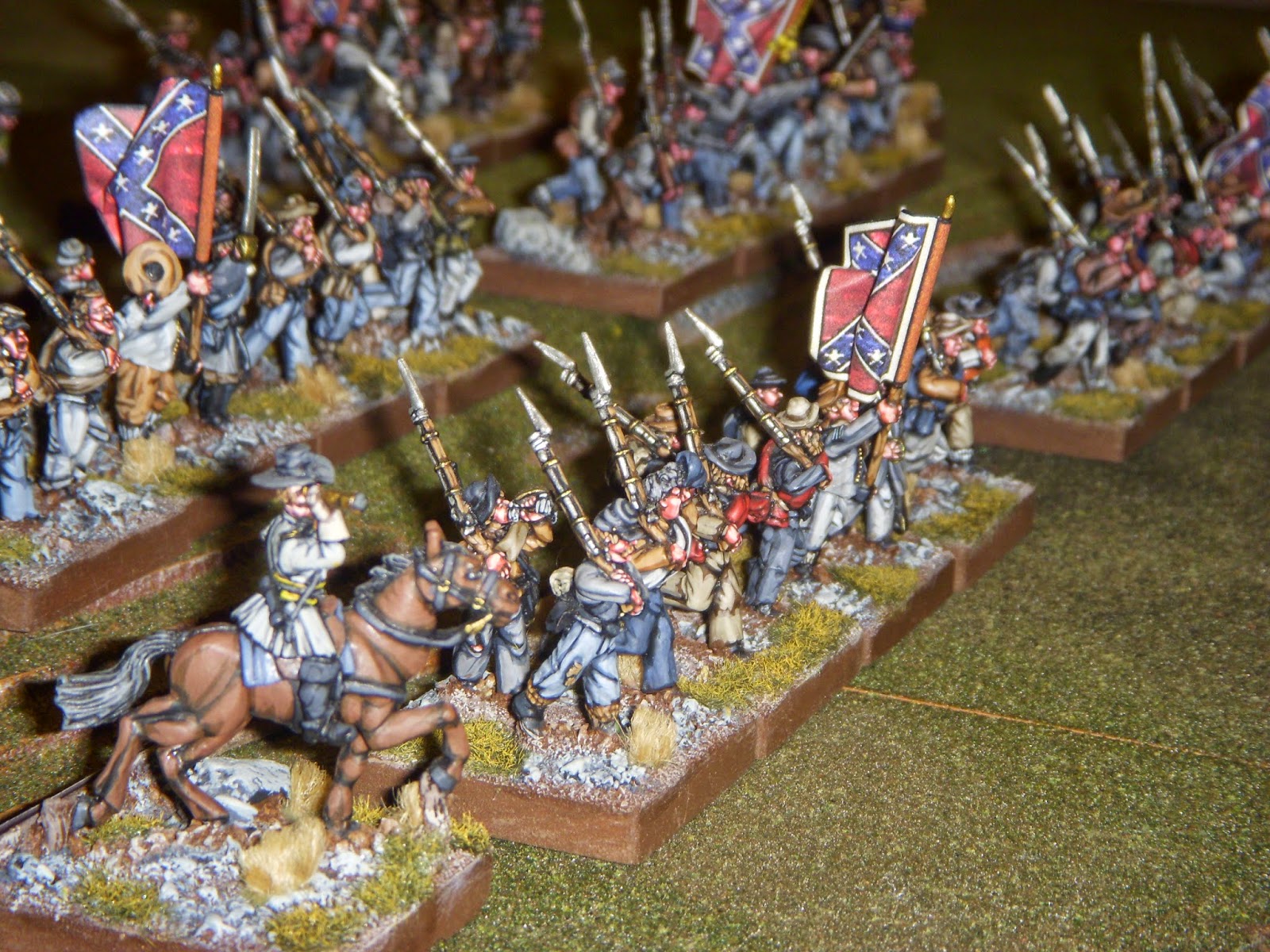 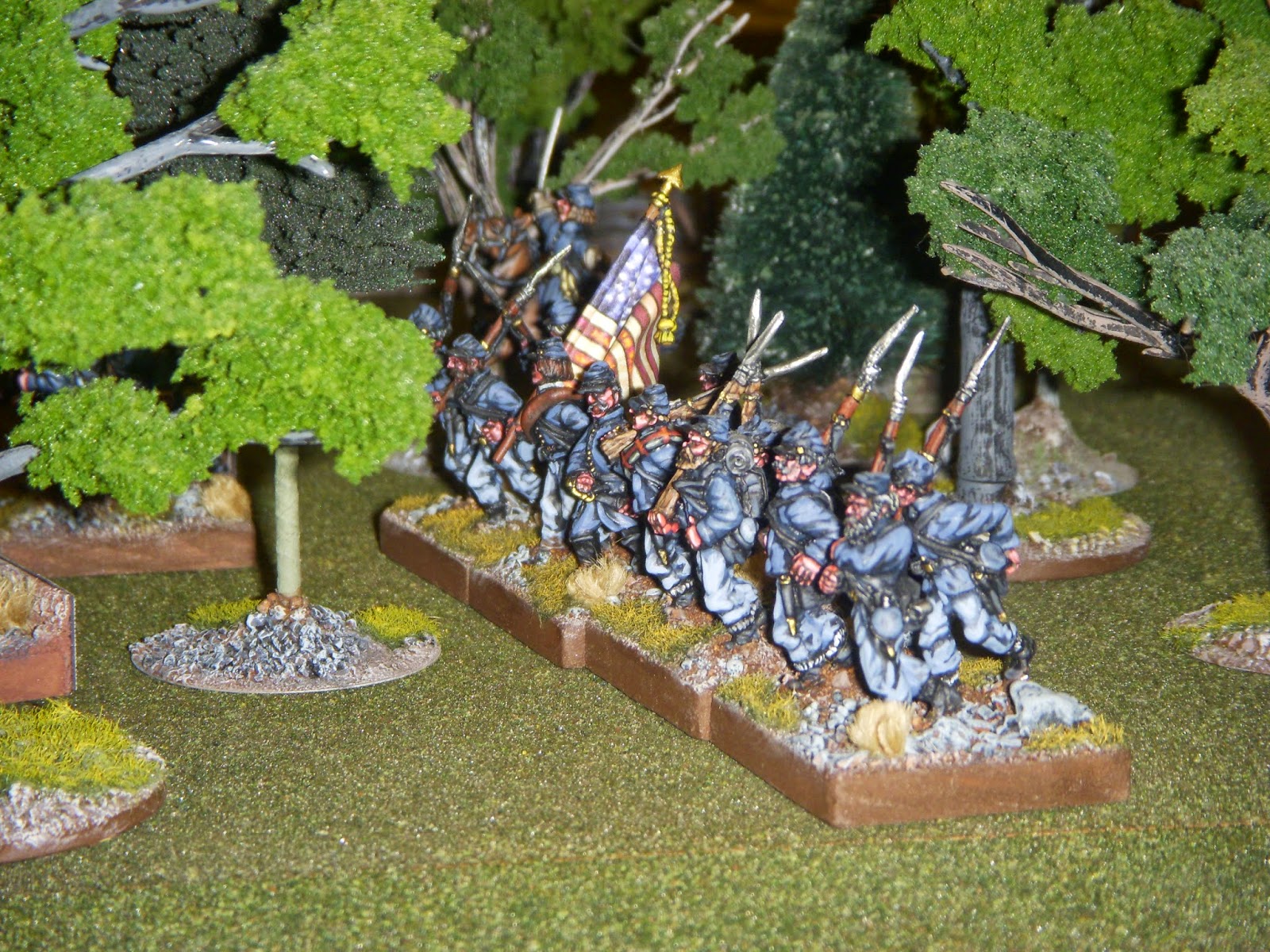 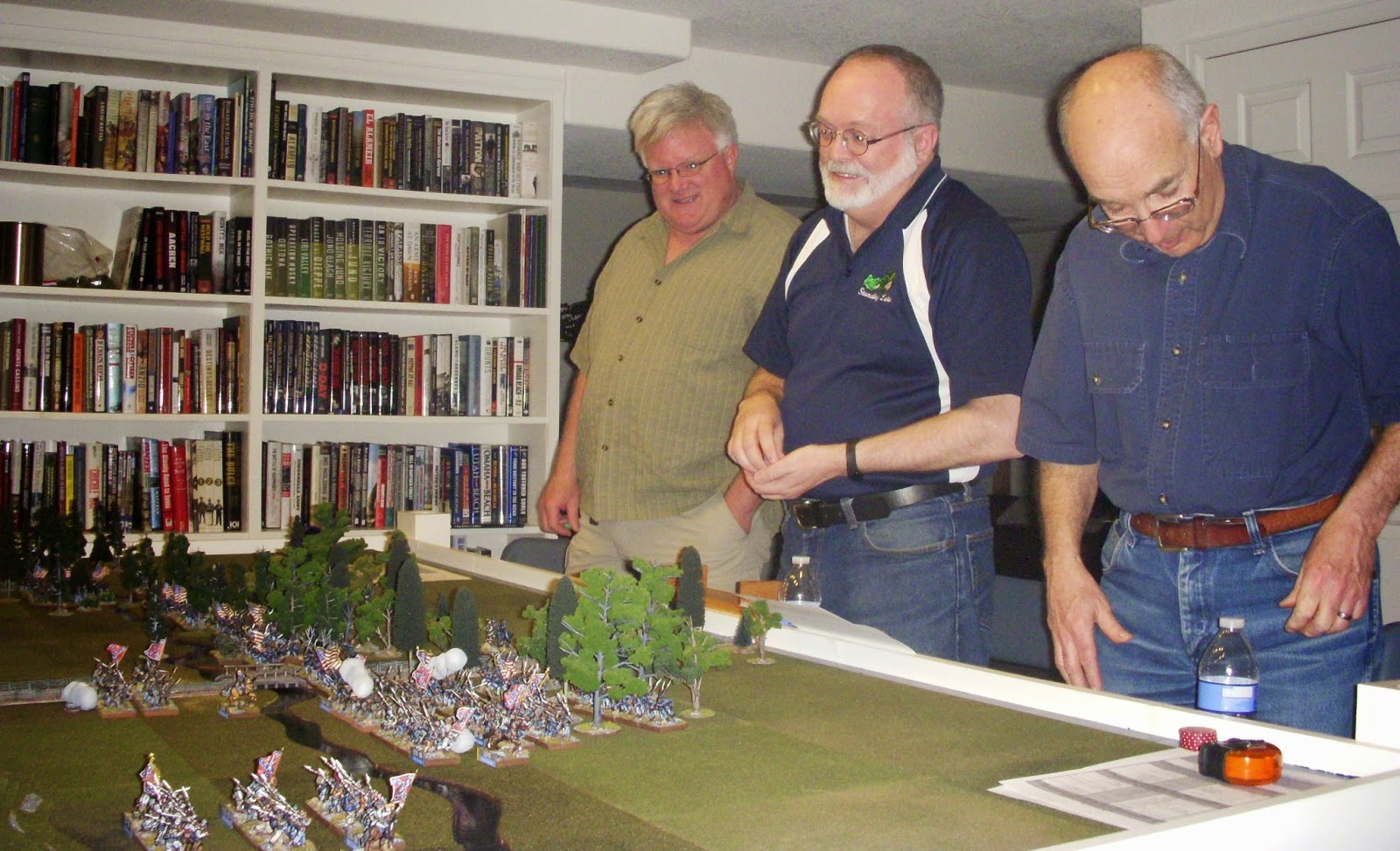 US Command eagerly prepares to pounce on the CSA army 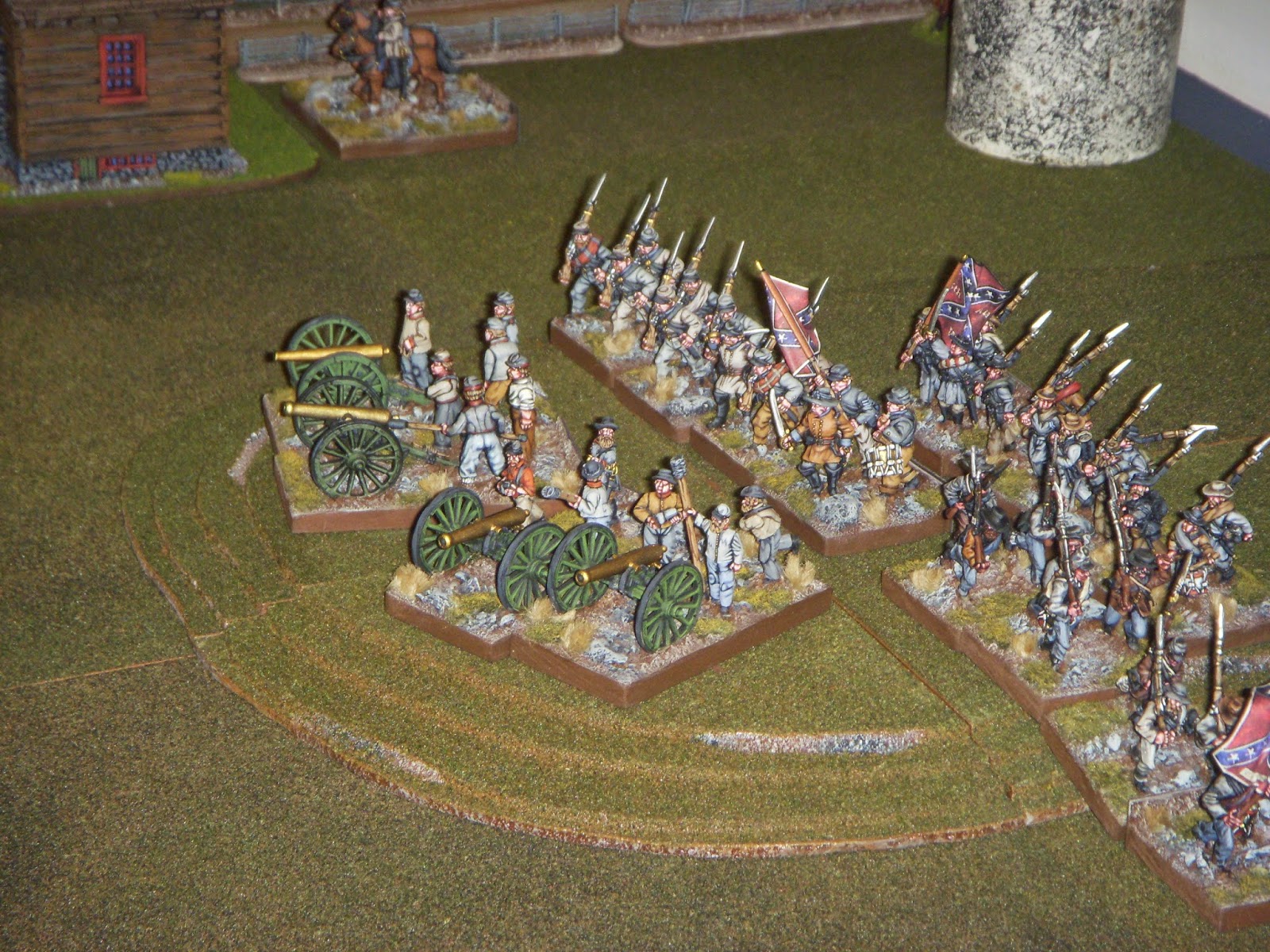 So - game 3 of the campaign is complete, with the campaign hanging in the balance for the CSA.  I think Confederate paper money is likely at an all time low.....

About a week and a half ago, we played the first "official" game of our new ACW campaign.  As in the first couple of practice games, the Confederates were once again crushed.   The Federal army executed a heavy flank attack (Federal left, Confederate right) that chewed up the Confederate right and effectively won the battle.  Some photos of the battle below.  I apologize that I don't have more, but I neglected to take many photos - I was too distracted with the combination of watching the game and being pestered by our Jack Russell terrier (terror!), Toby. 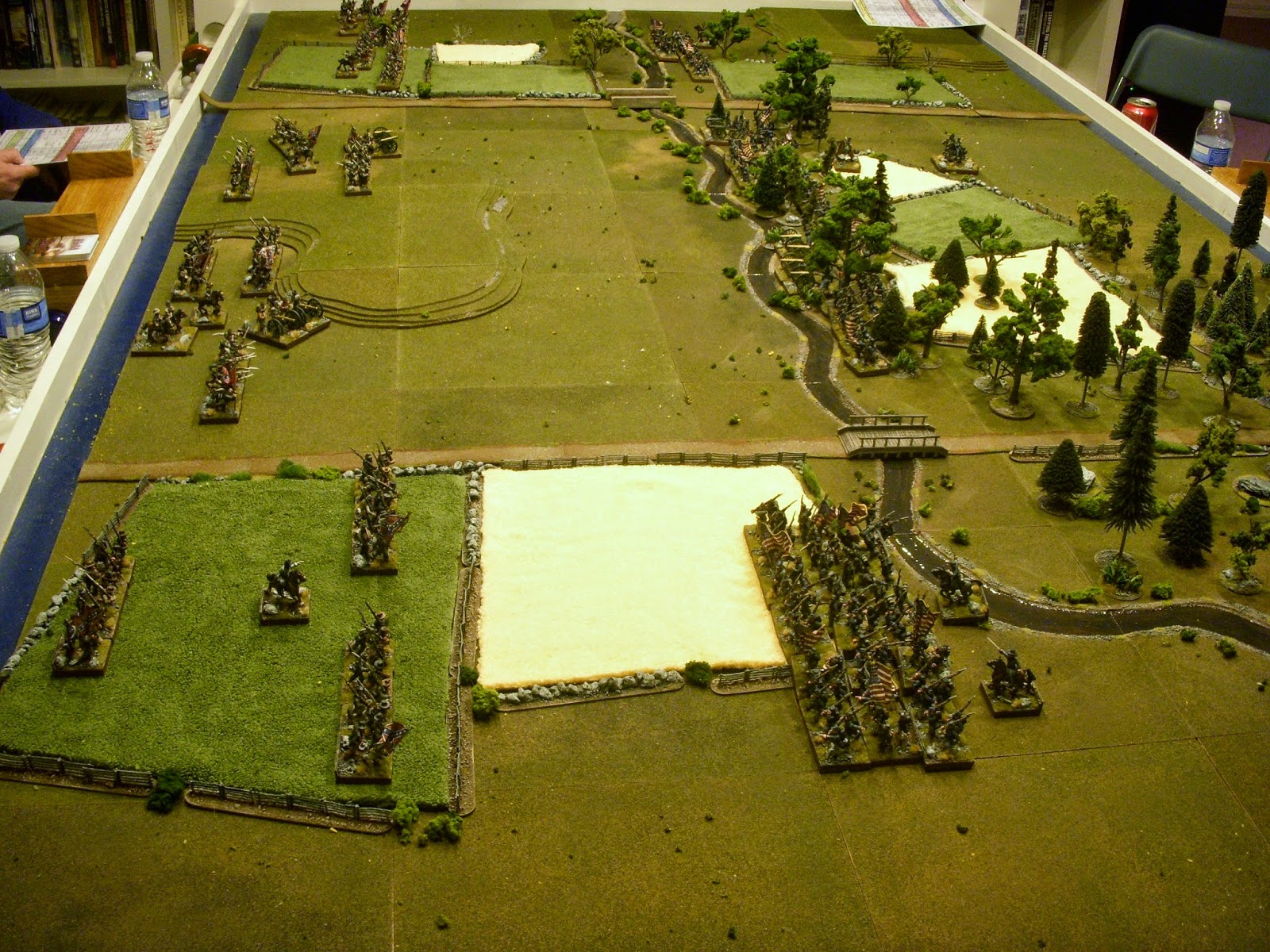 Battlefield at the start of combat, after initial deployments.  The large Federal flank force is at the bottom right of the photo. 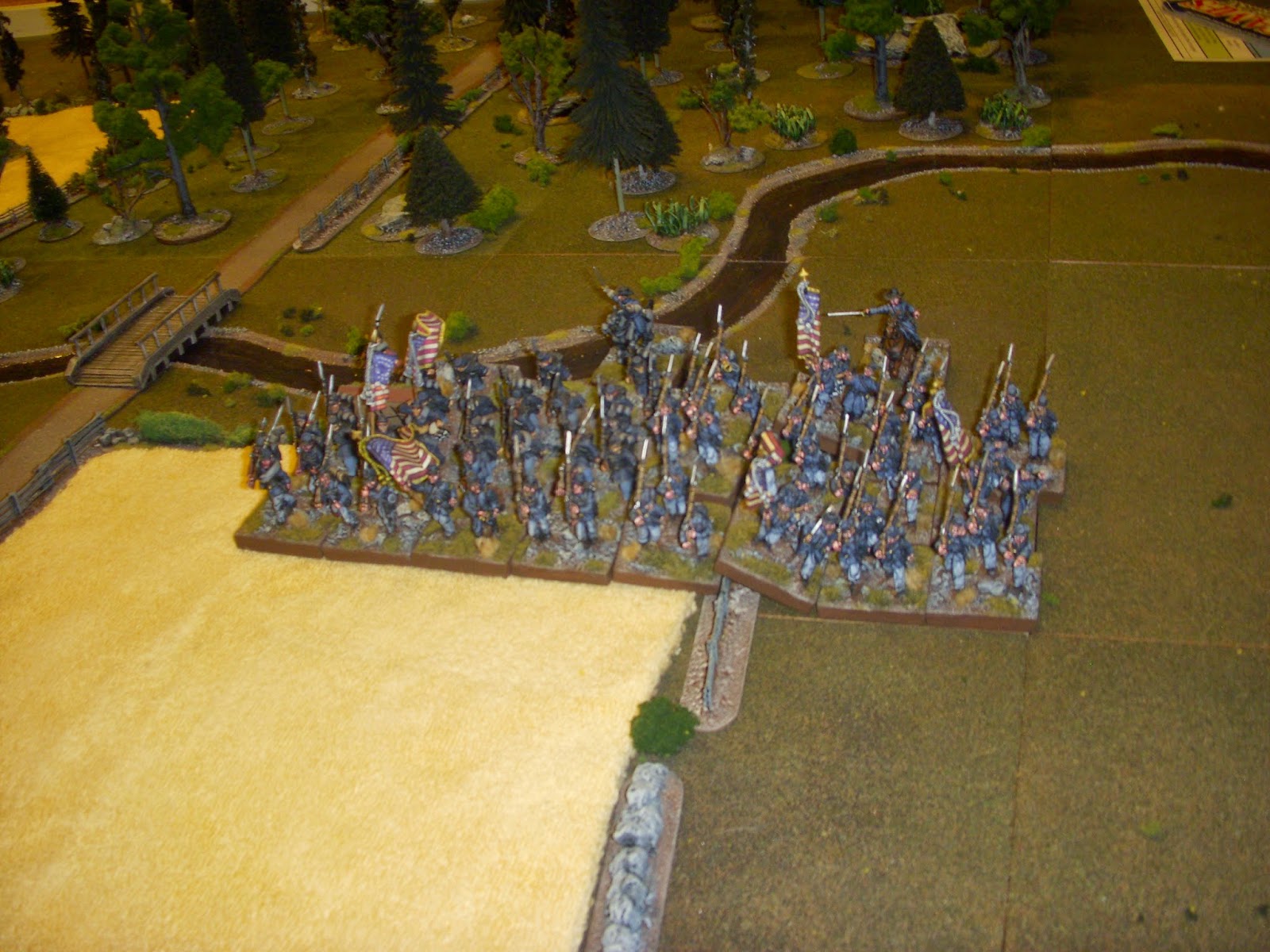 Closer photo of the flanking US division. 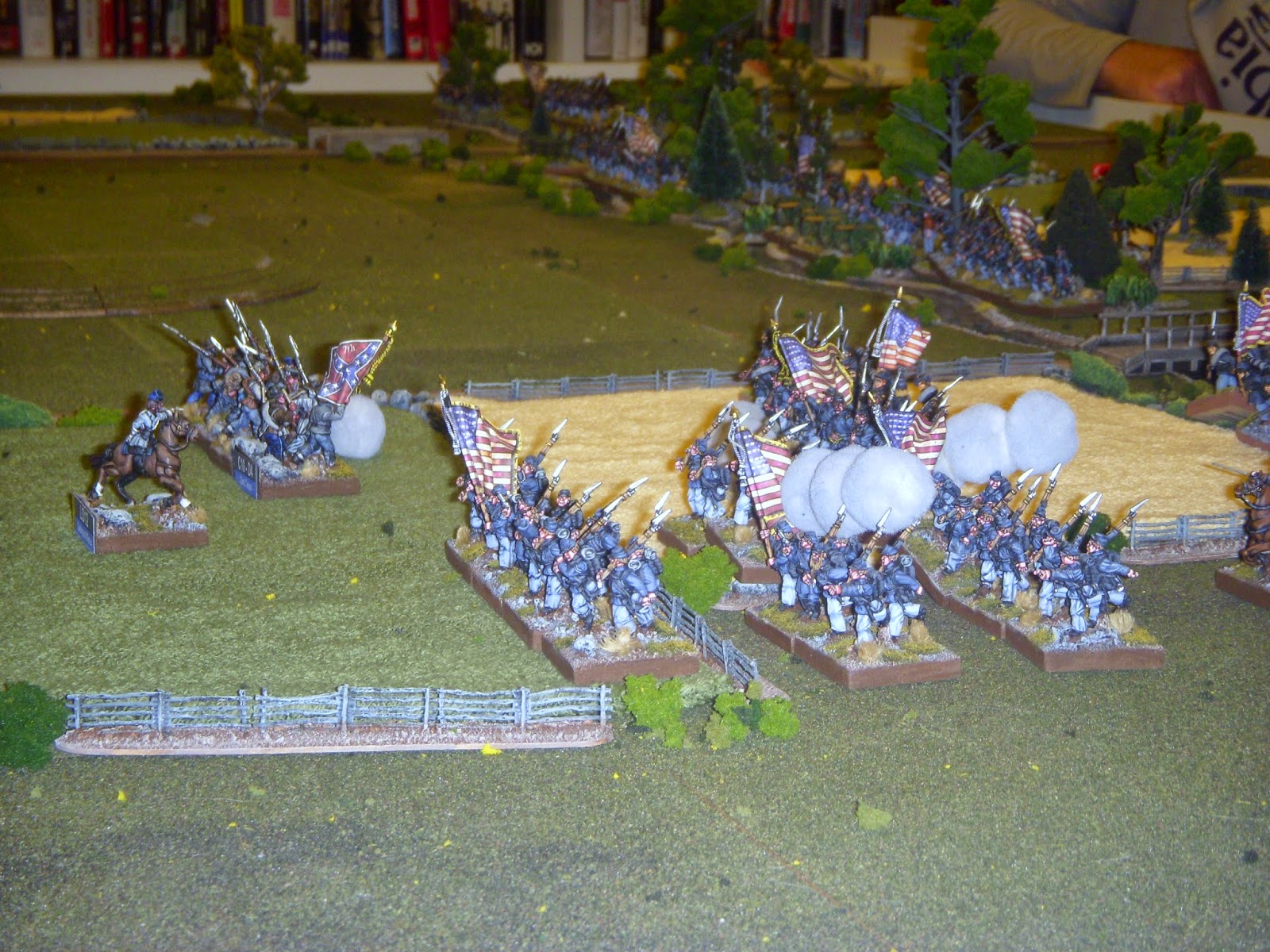 When it rains it pours!  More US forces cave in the CSA right flank. 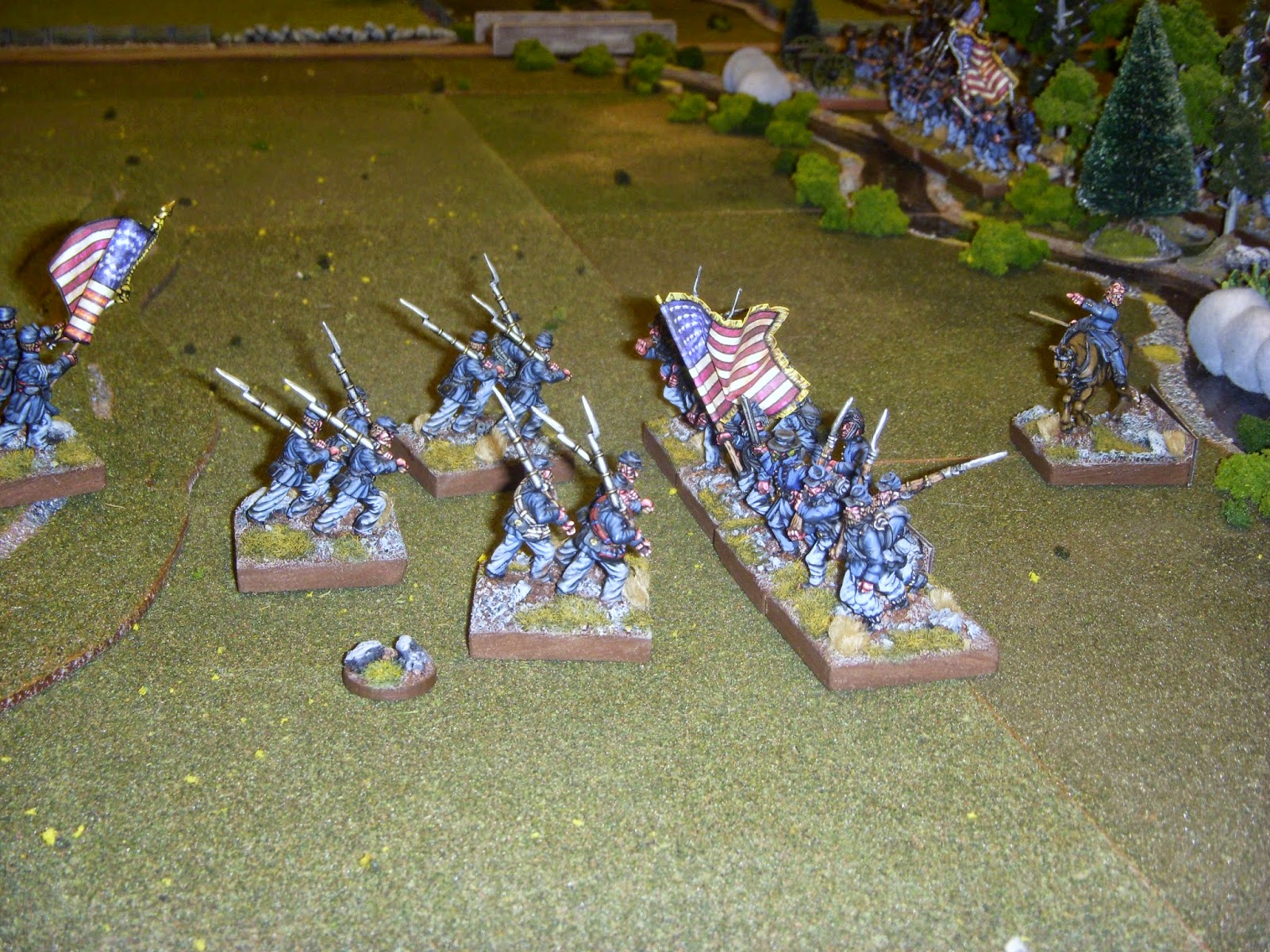 This way!  No - that way!  US routers flow past an advancing unit in good order. 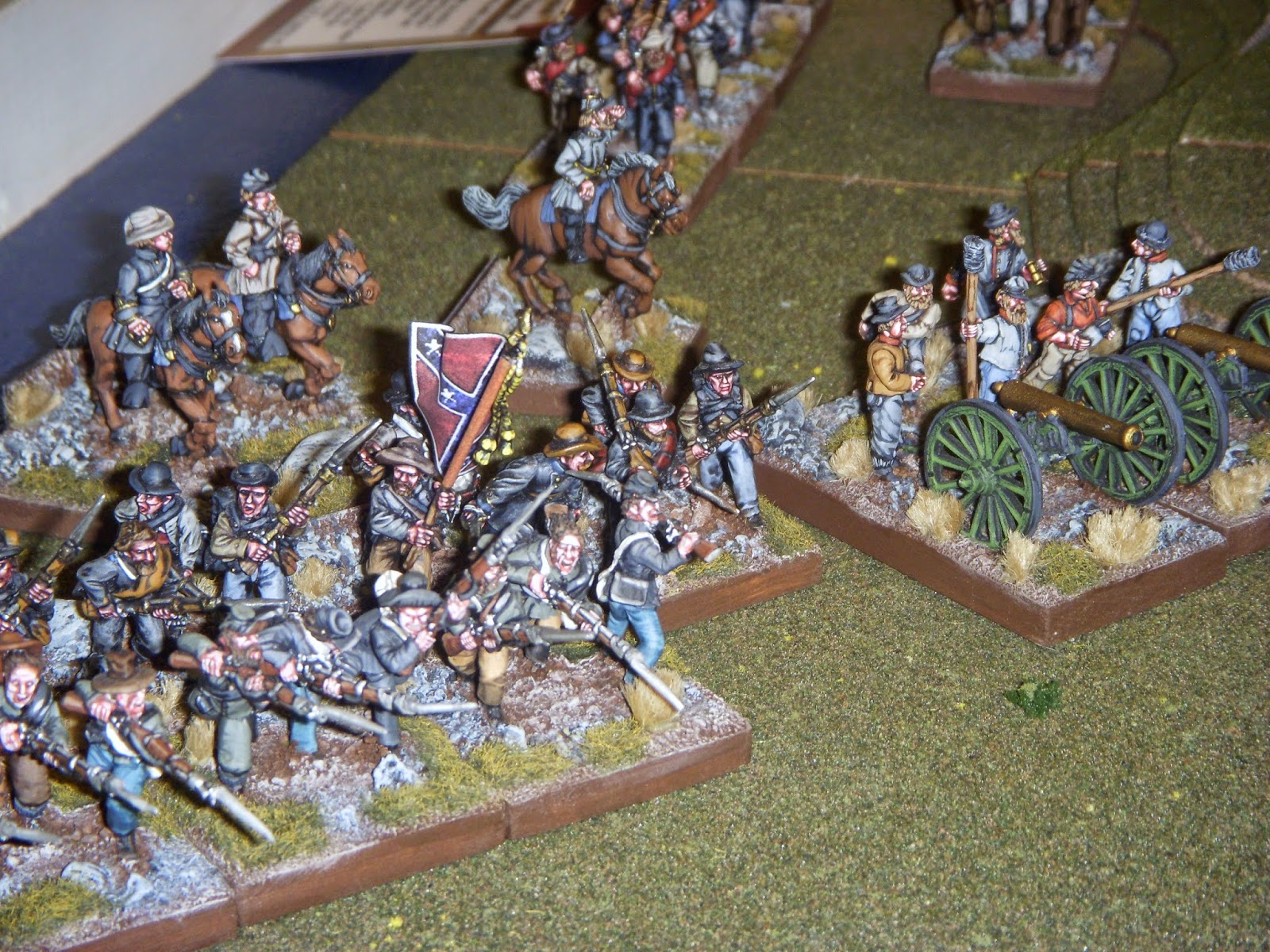 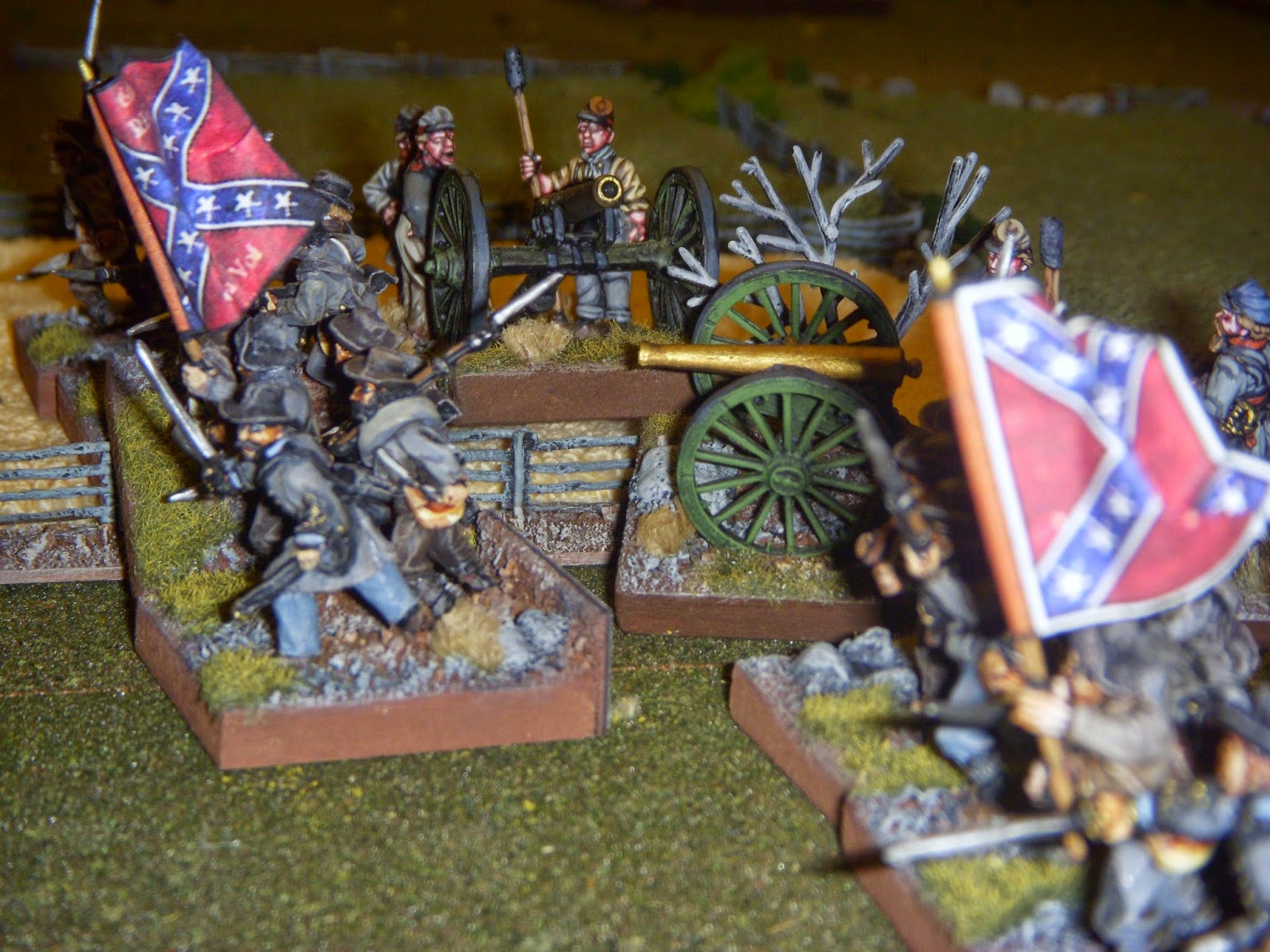 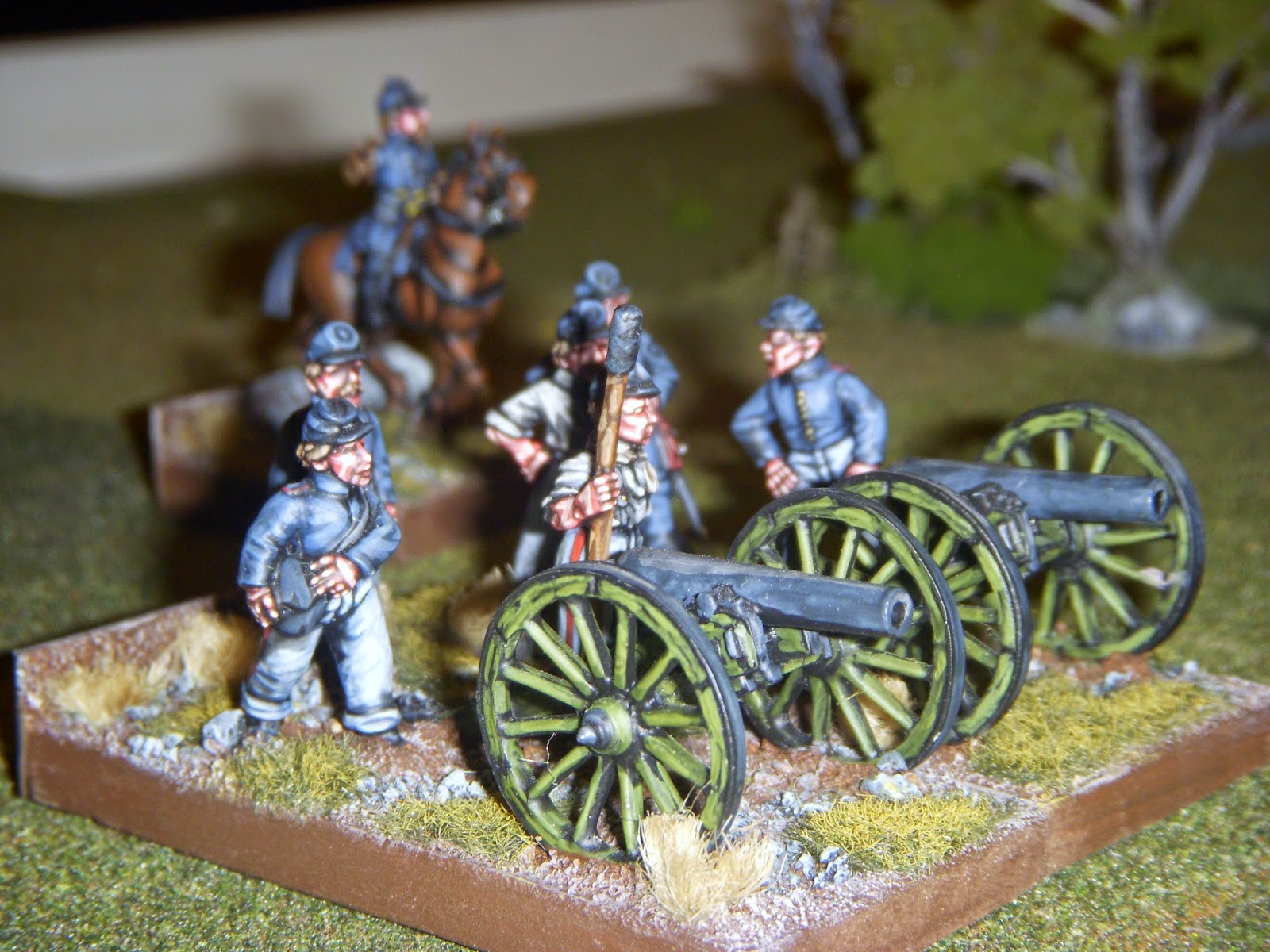 Federal artillery in the center. 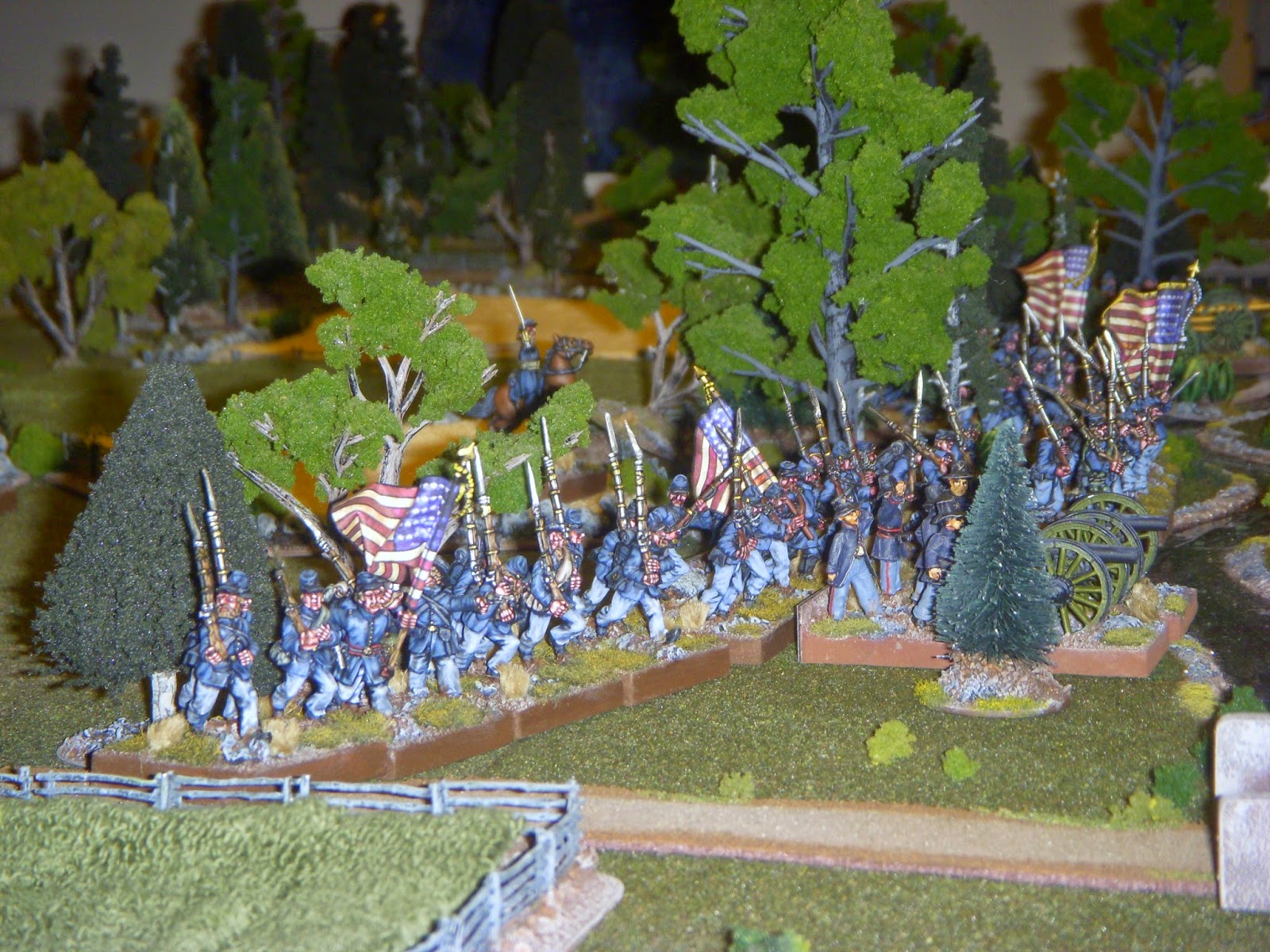 Federal infantry positioned in the center behind the river.

I continue to refine "A Bold Enterprise", the Field of Battle campaign system.  A few more tweaks as a result of this game/campaign process, and it has moved much closer to a finished, developed, game product.

This is a relatively short (approximately 130 pages), inexpensive ($24.99 retail; less through Amazon) history of the KGL's defence of La Haye Sainte at the Battle of Waterloo.

This would seem to be the first full length treatment of the defence of the farm of La Haye Sainte - Hougomont receiving far more of the "press".  Simms provides great backgrounds of the KGL and individuals at the farm that fateful day, and follows them through the battle.  While there are limited maps, that can be supplemented by the reader's other Waterloo books (or online resources).   Simms has a pleasant and easy to read style, and the pages fly by.

I enjoyed the book, learned more about the KGL than I'd known before, and found myself wanting to learn even more.

What more can you ask for?

Recommended.
Posted by Brent at 8:02 PM No comments:

These guys, Those Guys

I finished up my new set of unit label tags for my ACW armies for the game this past Saturday.  An example of them is shown below: 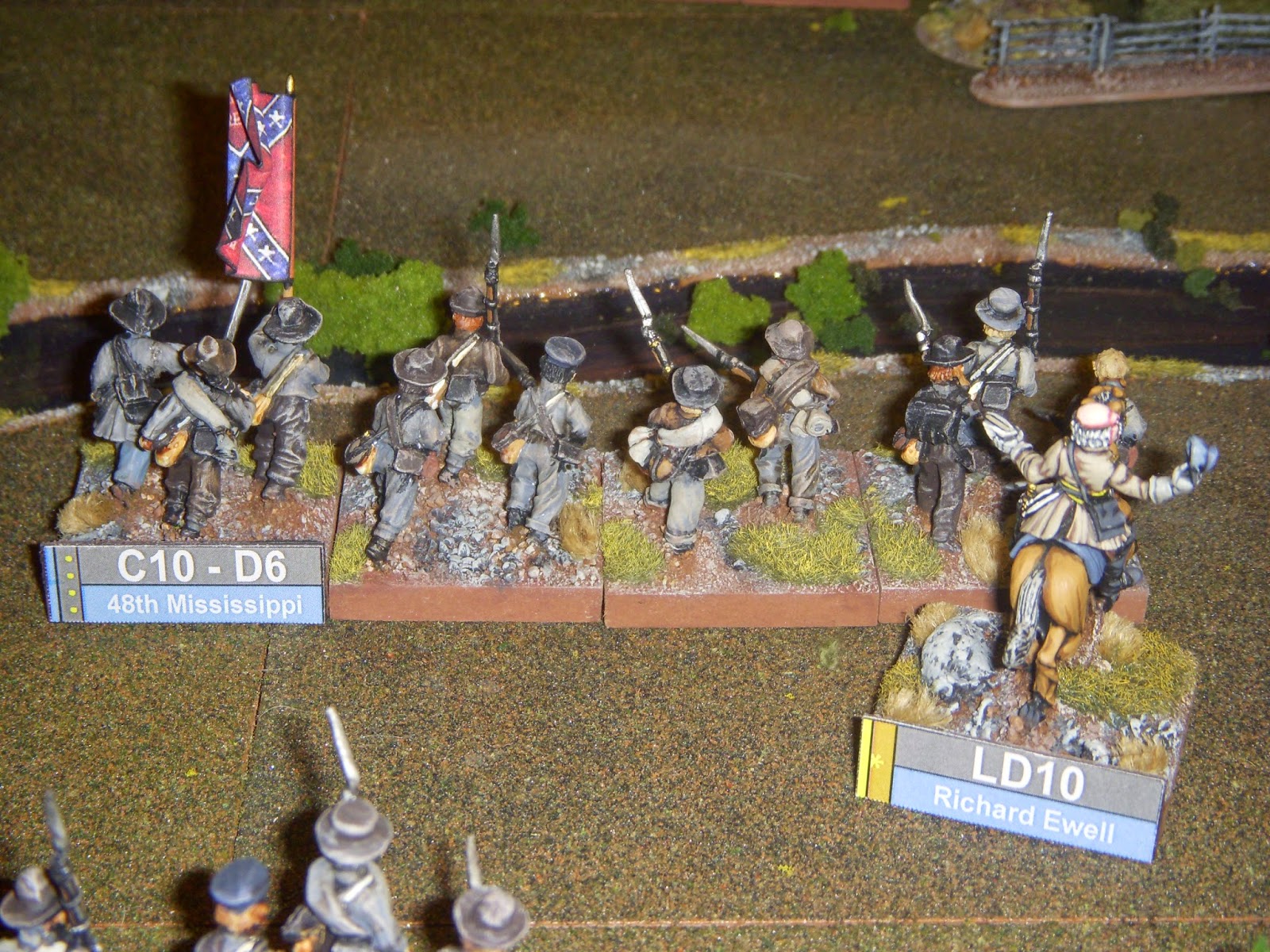 Visually, they are significantly better than the usual black background with white numbers that I normally use.  However, the unit ratings are a bit smaller to allow room for the unit and leader names.  Since the primary purpose is to quickly and easily identify the unit's ratings and the leader's rating, this can sometimes be an issue.

The biggest problem I noted in the game is that players NEVER referred to the unit or officer name in the game.  It was never "the 48th Mississippi is firing at...", or "Ewell moves to the 50th Georgia to attempt a rally....".   Instead it was "these guys are going to move up and melee those guys" and "this guy is going to roll for movement".

That makes those hours of preparing, printing, mounting and trimming the labels look like a dubious investment in energy....

So - my question - in your experience do players ever refer to units by name?  Or do they just ignore that in the heat of battle and just refer to "these guys" and "those guys"?