We're playing another Napoleonic game tonight, using Field of Battle 2nd edition rules.  We'll see if the French have better luck this time.  The tabletop map is shown below.

The woods on the flanks are Class II, the L shaped woods on the French center/baseline is Class III, as is the small town of Obere Stadt﻿.  Both hills are Class II.  The rivers are in fact pretty minor streams, and I'm treating them as "Class I Streams", a house rule which would force units only to stop on contact for that move segment.  The streams are pretty minor...it must be the dry season around Obere Stadt.

On another topic, I've been traveling heavily in June (and out more next week), so I haven't achieved much on the painting front.  But I have made some progress basing units for Pulse of Battle (the ancients version of Field of Battle).  My Macedonian army is pretty much complete except for some lights and officer figures.

We've been playing European theatre games for quite a while now....I feel the need for an ACW bash coming up.
Posted by Brent at 1:14 PM 2 comments:

Continuing on with the game report: 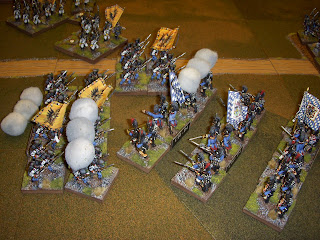 Austrians close in on Bavarians in woods.  Trust me, that darker green area is woods.  The trees have been moved to facilitate game play.  Not the prettiest, but it works. 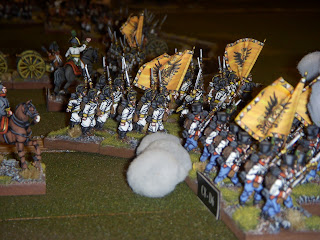 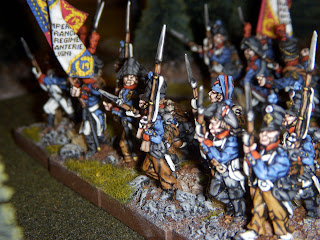 Hahaha!  Zay are nothing but Austrian scum!  We French laugh at them!  (You're supposed to say that line with a classicly bad French accent, favored by wargamers the world over). 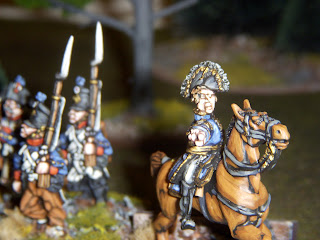 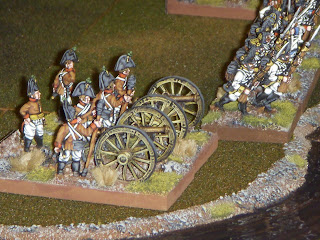 Austrian guns at the river pound the French next to the village. 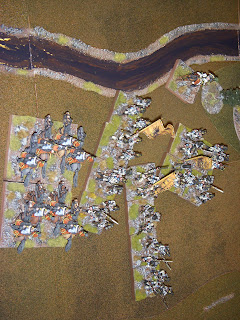 Does anybody know why some photos are posted with this goofy rotation?  I can't figure it out.  Anyway, the Austrians finally reach the river on the far flank and start to cross.  This is about the time things really start to turn bad for the French/Bavarian army. 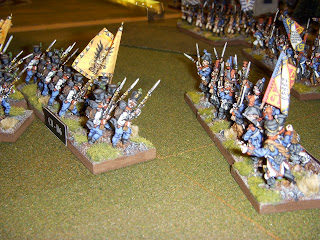 Near the end of the game...French on the left flank still hold, but the army morale teeters. 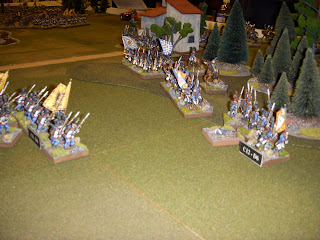 Poof!  The French flank begins to waver and fall back....or rout.   Shortly after this, the French ran out of Army Morale Points, and promptly failed their first test, ending the game.

I really like the look and function of my new terrain system.  The running joke in the group is how many terrain systems I've gone through in my search for perfection.   I'll post more on the terrain in a later post.
Posted by Brent at 9:32 PM 3 comments:

On to the game.  As I mentioned in the previous post, the Austrians were in a position to catch an outnumbered Franco-Bavarian army and do some damage.  Unfortunately for the Austrians, they were up against an army, that while numerically inferior, had significant leadership and troop quality advantages. 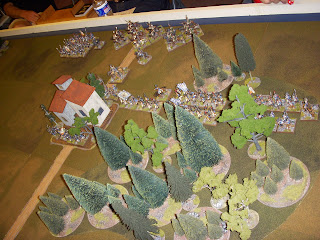 The French are stacked in and behind the town; Bavarious in the woods.  The entire force is sandwiched into the left 1/3 of the table.  The French decided (correctly!) that they had little business in advancing into an attack on the Austrians. 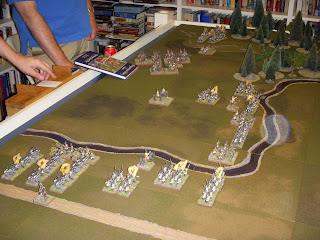 The Austrians deployment.  A significant portion of their army is deployed to the far end of the table.  "Time to march Boys!"   A UFO hovers over the river at the center of the Austrian army... 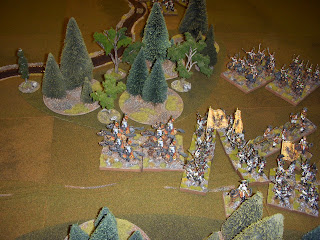 The Austrians from that far flank muddle their way toward the river.   That's just plain ugly. 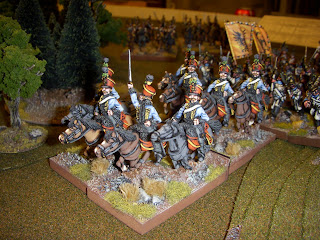 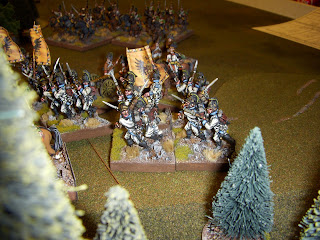 Austrian infantry advance.  I have to admit...I love the way Austrian armies look.  I have SYW and 1859/66 Austrians, and I love 'em all.   The white uniforms really sparkle with the facing colors. 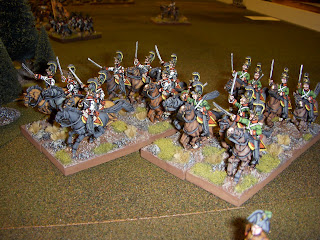 Austrian cavalry from the flank force makes its way forward. 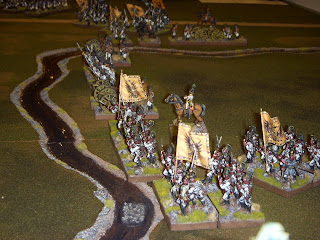 The Austrian center at the river.  These are my new river squares...I found that I just couldn't get used to rivers and roads on top of the ground cloth...too much sliding around and dissarray. 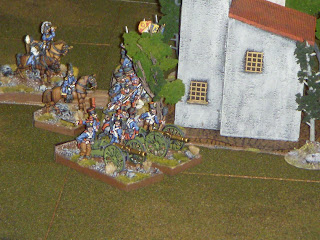 The French are waiting.....

More photos to follow as the battle continues.
Posted by Brent at 8:52 PM 3 comments:

Played an 1809 game last night; Austrians vs. a French/Bavarian allied army using Field of Battle 2nd Edition (whew!  It feels good to be able to publicly mention FoB2).  The set up favored the Austrians, giving them a decided advantage in initial set up and army strength.  Pretty good considering how bad most of their officers were (nearly all D8s).  The French had a quality advantage, but were outnumbered by around 30%.  I'll include some photos of each army prior to the start of the game: 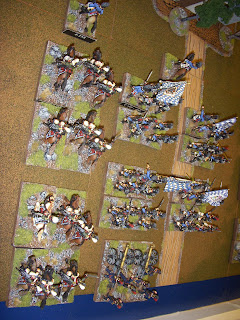 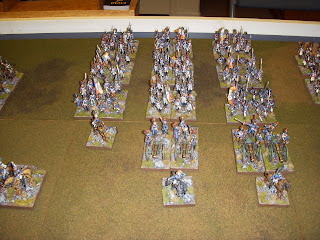 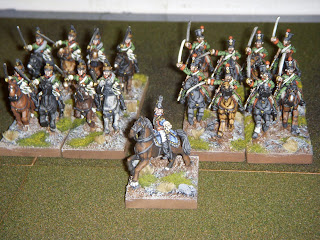 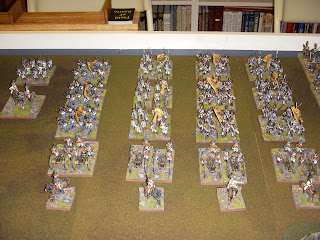 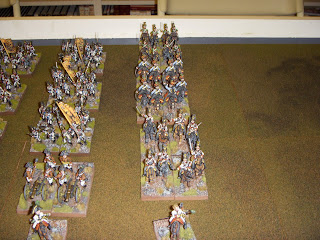 Austrian Cavalry
More game photos to follow.  This was also the first game with my new terrain squares; I was really happy with how they worked and looked.  More on those later as well.
We had a great, long ride today.  Beautiful warm day, with no wind.   Absolutely perfect weather for a ride! 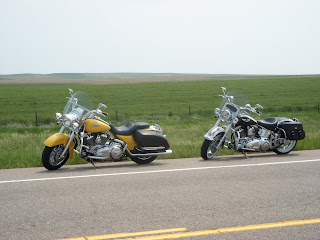