Wow, what a defensive performance by the Broncos.   Not much from the offense, but just enough.  Two weeks to wait before playing.....who knows?  Carolina or Arizona.   I'd prefer Arizona because I think they're more beatable, but I suspect it will be Carolina.

I can't take watching too many more games like that..... 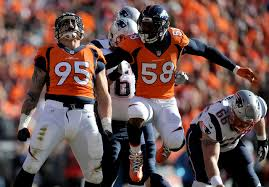 Let me begin by once again stating that I despise the Patriots.   From top to bottom, I have many reasons and won't go through that again...

But wait!  Here's a post that gives details about why so many Broncos fans hate the Patriots, and one Josh McDaniels, who single handedly virtually destroyed the team and organization.

I suspect that Joshy has a few years in the spotlight remaining, inevitably being revealed for what he is whenever Tommy Crybrady retires.   I feel sorry for whatever team makes the horrendous mistake and gives the head coaching reins to their team to this clown.

Who will win Sunday?  No idea.  I'm obviously on the Broncos side.  I find it interesting that the media is overwhelmingly supporting the Pats.   I think this will be a tough hard fought game, decided in the last half of the 4th quarter.  I've given up on expecting the Broncos to win a game in a stylish fashion this year.  That's just not who they are.   The Broncos defense is awesome; strong against both the pass and run; stocked with talented athletes from the defensive line back through the defensive backfield.  The Broncos have their kryptonite (the Steelers) and managed to survive that test last week.   Let's hope that this week, the Patriots' kryptonite (playing the Broncos in Denver) continues to have power.....

On a game front, I'm finally able to squeeze some time in for figure painting again.  I'm cleaning up a new ECW foot unit as I make my way towards game size armies.  I'm debating about painting alternative command stands to allow conversion between ECW and TYW forces.    Hmmmm.
Posted by Brent at 4:00 AM 3 comments:

Well, it is set.  Broncos play the Steelers next Sunday in the Divisional playoff round.   An incredibly  gutty display by Ben Roethlisberger, obviously gutting it out on the last drive with a severely injured soldier.  Hats off to a tremendous final drive.

Unfortunately, it was a game littered by thuggish, cheap shot plays.  From both sides.

If I was a Bengals fan, I'd be sickened to watch clowns like Vontaze Burfict and Adam Jones on my team. Ultimately, true character comes out, and both acted as their reputations, costing their team when it counted, losing the game due to their lack of discipline and selfish play.  Hello to the off season guys.

The NFL has to be embarrassed by that display tonight.  I suspect some hefty fines will be handed down.
Posted by Brent at 10:13 PM No comments: