The Biggest Book I've Ever....

Here's a pic of the biggest book I've ever seen or purchased.  It is MASSIVE.  "Kursk, The Battle of Prokhorovka" comes in at slightly over 1600 pages and several pounds in weight!  This is a fantastic book, full of analysis, summaries, sidebars, photos, etc.  It is a much easier read than Glantz.  Published by Aberdeen books, this is a once in a lifetime book.  While not cheap, I am thrilled to have a copy.

A quick note - if you are ever in the Denver area and have the time, I heartily recommend visiting Aberdeen Books.   Packed with any WW2 book you could want, plus a huge WW1 section, as well as a very large ancient, medieval, all the way up through FPW section.   They stock tons of books from Helion, and have so many specialist books that it is stunning.   I'll warn you - prepare to leave some money if you visit - you won't be able to just browse.

I've been out of action on the gaming front over the last month - here's what my game table looks like right now: 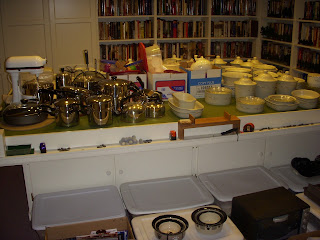 The table is covered with half of the cookware from our kitchen, as we're in the middle of a total renovation of it.  The kitchen is the last room in the house to finish, and while I've enjoyed the entire project (almost 2 years), I'm looking forward to having free time!  I'm guessing we won't be totally finished until after the start of the new year, but at least there's light at the end of the tunnel.

Since I haven't had as much time (or energy!) for painting figures, etc, I've been doing more fiction reading.   I just finished reading "The Heroes" by Joe Abercrombie.  I loved this book.  Great characters, fantastic action.   From the Amazon summary:

"They say Black Dow's killed more men than winter, and clawed his way to the throne of the North up a hill of skulls. The King of the Union, ever a jealous neighbor, is not about to stand smiling by while he claws his way any higher. The orders have been given and the armies are toiling through the northern mud. Thousands of men are converging on a forgotten ring of stones, on a worthless hill, in an unimportant valley, and they've brought a lot of sharpened metal with them."

I previously read "Virtues of War" by Bennet R. Coles.  A military SF book, this was also a great read.  Here's a summary, again from Amazon:

"Lieutenant Katja Emmes is assigned to the fast-attack craft Rapier, joining a mission to investigate weapons smuggling activity between the Terran colonies of Sirius and Centauria. If true, this act of rebellion could escalate rapidly, and lead to all-out war.

When combat does erupt, its ferocity stuns the Terran forces, and pushes them to their limits. It tests the abilities of Lieutenant Emmes, as well, along with Sublieutenant Jack Mallory and Lieutenant Commander Thomas Kane, commanding officer of the Rapier. But failure is not acceptable.

They must defeat the enemy... by whatever means necessary."

Both books were engrossing and a nice break from non-fiction works.

Here's a photo to show the relative sizes of the books.....I told you the Kursk book was big! 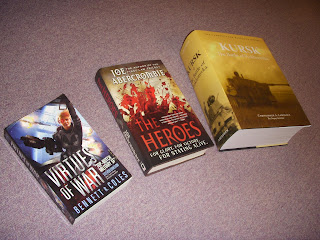 Our group played a real nail biting game this past Saturday - 1809, Austrians on defense vs. French.  The Austrians had established a position on a ridge, leaving a sizeable town to their front undefended.  The Austrians had elected to not garrison the town, as they thought it was too exposed and would allow the French to concentrate against any troops posted there. 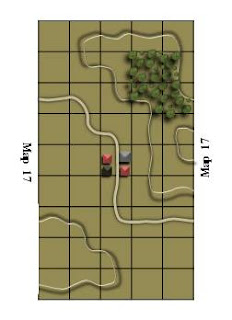 The Austrians were on the ridge to the right, the French beginning along the vertical baseline on the left. 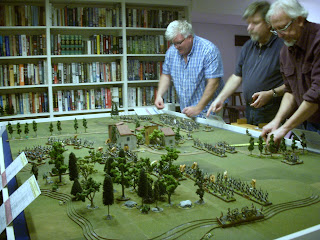 The French begin to advance, poised for their assault on the Austrians on the ridge.

The French assault was aimed at the apex of the ridge, in the diagonal square behind the town.  Unfortunately for the French, this position of honor was held by a unit of Austrian Grenadiers - and a stout group they proved to be!   On the French left, the French basically held in place, staring down a few more Austrians to their front.   The battle turned into an assault on both sides of the town and on the southern edge of the ridge.  Eventually the French punched a hole in the Austrian line at the corner of the ridge, and their cavalry brigade poured through, decimating the Austrians (both infantry and cavalry).  At the end of the game, both sides had 0 or 1 Morale Points remaining, and gave points back and forth.  Finally, the French were at 1 point, the Austrians were at 0.....and an Army Morale card was drawn for the Austrians!  Unfortunately for them, they failed (rolling a 1).   What a game!

A variety of photos from the game: 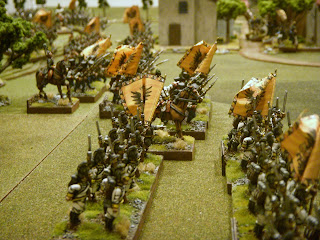 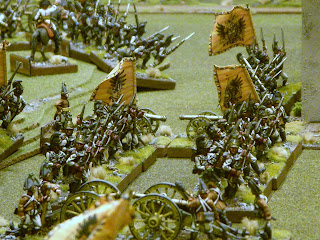 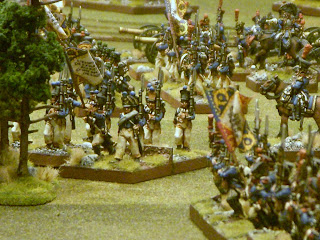 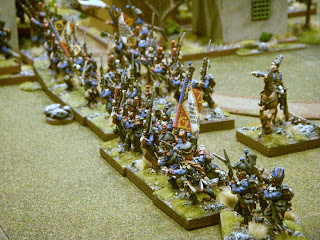 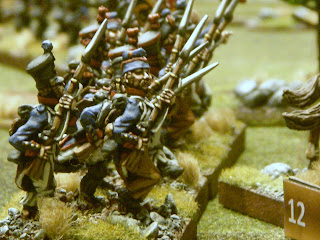 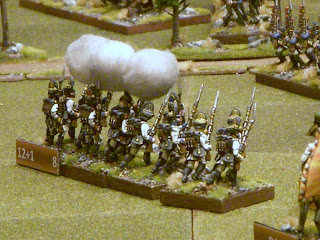 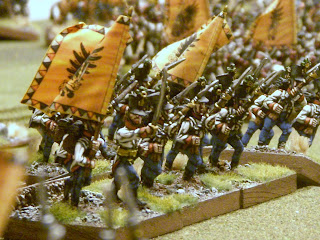 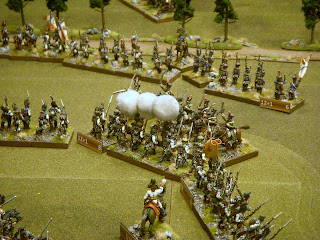 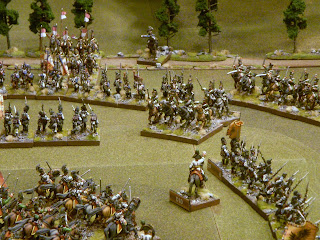 I should mention that the rules used were Field of Battle, 2nd Edition, with a few house rules.  The ridge was a Class I hill, meaning that it didn't hinder movement, but provided elevation advantages and line of sight protection.  Also, no Maneuver cards were in the deck.  Units could maneuver or change formation on Move cards for the price of 1 move segment.  On Move cards with won even rolls, the maneuver/formation change was free.  Finally, and most significantly, ordered cavalry could melee on Move cards.  Disordered/out of command cavalry still required either a Melee or won even roll on a Move card.  These all worked fantastically well.  In particular, I really liked allowing cavalry to melee on a Move card.  It made them much more dangerous, and not a thing to be trifled with.