I'm sitting here in my basement, surrounded by "stuff" usually in our storage room, which also houses the water heater and furnace/AC.   I'm surrounded by all that "stuff" because when we got up yesterday, the house was a toasty 58 degrees F.  No heat!

No problem, right?  Just get the heating contractor in - probably just the igniter on the furnace.   Ha ha ha...not so fast.  Turns out that the igniter WAS broken, but there was also a leak at the control valve.  Once that was all replaced, it turns out that the main board on the furnace was bad as well.  Rather than sink thousands of dollars into a 20 year old furnace, and an AC unit that would run continuously to cool the house to 75 degrees in the heat of the summer, we bit the bullet and went for a brand new, high efficiency unit (furnace and AC).  We're also replacing the old water heater, before it buys the farm as well.   Increasing it to 50 gallons vs. the old unit's 40 gallons.

I'm looking forward to coming home after a long motorcycle ride in July or August and stepping into a nice cool house, rather than the stuffy one that we'd had the last couple of years.  It will definitely be nice to not be calling the heat/ac contractor every year for service as we've had to do lately.

On to a gaming note:

I had also wanted to look at different ways of marking units that had fired instead of using the good old reliable white "puff balls".  The puffs worked well for many years, but I'm tired of seeing troops pushing huge fuzzy medicine balls around the table.  The new markers are a variation of what I use for WW2 games.  The fire markers are just round markers with 3 balls on them - you can consider them cannon balls, or musket balls - whatever suits your fancy.  I think they look much nicer, and less obtrusive than big white puff balls. 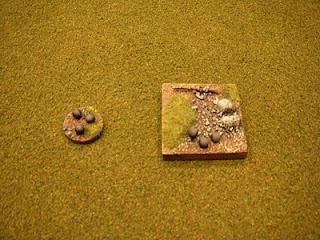 The next post will follow this weekend's game - assuming all the "stuff" is gone from around my game table!
Posted by Brent at 11:39 AM No comments:

We played a test game of "Grand FoB", a grand tactical adaptation of FoB, last night.  It worked well, and I've made some adjustments based on the game.  Essentially each infantry unit is a regiment/brigade size unit of around 3000 men.  The command group is the division; players are more concerned with the employment of the assets inside their division than they are in worrying about individual brigades.  I think this will be a quick playing grand tactical alternative to tactical FoB games that will allow "big" battles, while still having enough tactical decisions to interest players.

I've toyed with the scope of the new ancients game "Field of Battle: Ancients", for quite some time.  I've always been fascinated with the medieval era, and I'm now planning on including both ancients and medievals into the rule set.  Along with the time expansion will come a new name "Pulse of Battle".   The rules will cover from Egypt/Hittite through the Wars of the Roses.  As for army lists, I'll hit the major combatants, and focus on wars/combinations of armies, rather than obscure lists for flaming pig psiloi from the eastern Balkans, etc.   I have to admit that the reason I've been putting off writing this set of rules is that I absolutely DETEST making up army lists.   Its tiresome and tedious...but necessary in its own way.

There are a couple more reasons for the expansion of time eras covered in the new set.
1)  I think its benefit to Piquet customers to consolidate the eras into a single product
2)  I'm not sure I have 2 complete new rulesets worth of writing in me!