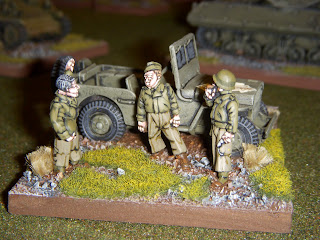 Yes, that's right WW2 Field of Battle, as opposed to Field of Battle:WW2.   The latter is my published WW2 game using companies as the smallest unit.  The former is the under development game using squads as the smallest unit.
Does that make WW2 FoB a skirmish game?   NO!!!!   Most definitely not.  The smallest unit for combat/morale is the squad or weapon section, or 1-2 vehicles.  But - the smallest maneuver element is the platoon.  So - you're really in the position to put multiple companies to a battalion plus on the table with this game scale.  That allows all the interaction of troop types and weapons.   Its a very fun game scale, and very "pure", without the abstraction present in Field of Battle:WW2.   I still love that higher level game, but the new game opens up different game and scenario possibilities.
I was originally going to publish a 2nd edition of FoB:WW2, but I now plan on just publishing a new game, with the squad rules - WW2 FoB.
The game was played with Greg R., Greg C., John, and Chris as the attacking US team, with 2 infantry companies, a couple of Sherman platoons, and 1-2 M10's.
The Germans were played by Eric, Tony, and Terry (aka von der Korken).
An impartial international observer, said to be from neutral Sweden, was also present in the form of Bob Jones.
The Germans were in defense of a small town, with the US deployed on a ring of hills/ridges around their perimeter.  The game started well for the US, with the Germans taking some pretty heavy losses.  I was sure the Germans were going to lose, as they were at one point down to 0 morale points.   I didn't know that the US was ALSO down to 0 morale points at the same time!   Shortly after this, the tipping point was the losses in the Sherman platoon which bled off morale points to the Germans, and also seemed to sap the will of the US players.  Victory to the Germans!
Some photos from the game: 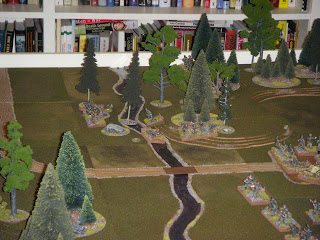 Well - that's all for the photos for now.  Blogger is taking forever to upload photos, so I'll do a photo only post at a different time.
Posted by Brent at 7:21 PM 5 comments:

Looks like another long year for the Broncos.  They're now 1-3, with the Chargers up next week before their bye week.   Most likely looking at a 1-4 record, with big changes implemented in the bye week.  At least there is some hope that this coaching staff has a clue, as opposed to the Josh McDaniels debacle of the last 2 years.   Both McDaniels and Shanahan deserve the blame for the talent deficit the Broncos currently have - absolutely horrendous drafts over their tenure as head coaches.

Anyways, on to the wargaming!

I've been working away on the squad scale game for FoBWW2.  At this scale, each infantry unit is a squad, vehicles are a unit, weapons and their crews are a unit.   Nice and simple, and "pure".  I'm adding a bit more differentiation of unit types in the ratings, as well as the obvious needs like ground scale changes.  I'm planning on a 1"= 25 yard ground scale, with ranges reduced from theoretical maximums to account for real world sighting and engagement realities.  I'd like to give the game  a go at our next game in October.

Field of Battle 2nd edition is now out and available for sale, as is Din of Battle 2nd edition.  Filling customer orders has taken a substantial amount of my time, but I think I'm pretty much caught up now.  Blunders on the Danube, a FoB scenario book by Peter Anderson, has been delayed due to file problems, but that should be coming out soon as well.

Terrain projects - as can be seen in game photos in past blogs, I've gone to yet another terrain system.  This time, its squares!   I use 1/8" thick vinyl tile, and double them up for the base squares.   Hill sections are modular, and are comprised of 4 levels of tile for a 1/2" thick individual hill contour.   I think they look good, and very much like a contour map.   With this system, I can do pretty much any terrain I want, and it stays very functional and durable.  I'm in the process of finishing up another 25 or so hill section components.  It there is interest, I'll do some "how to do it" posts on the system.

I've also been playing with a painting technique that keeps my general style intact, but greatly speeds the process.  In general, I prime with black, block paint, hit it with an ink/Future mixture that defines the folds in the casting.  Highlight one or two layers, dullcote and BAM!  Done!   I used to average about 45 minutes a figure for a complex paint job (Napoleonics).  Now that's about 30 minutes.

I'll post photos of the painted figure effect in a subsequent post.
Posted by Brent at 6:11 AM 2 comments: