Field of Battle 2nd Edition Cover Peek and Other Thoughts

Thought I'd post a preview of the cover of the new Piquet product, Field of Battle 2nd Edition. 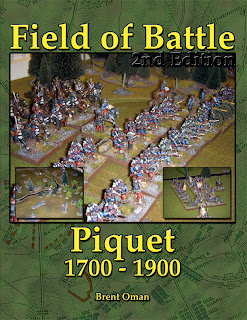 Looks pretty cool!  Its always neat to see the final touches of years of work.  I should have copies very soon.
The other thoughts in the post title are regarding campaigns - miniature game campaigns in particular.  I've done many through the years:  Theatre of War (FPW, ACW, WW2), node movement (FPW), mapless (ACW, FPW), etc.  They were all fun, for different reasons.
I'm starting to wonder if the scale and intent of campaigns is what gives me fits when I'm setting up new ones.  Typically, meglomania sets in and the campaign covers a wide theatre of the conflict.  Why?  Because we can!  If you look at most historical campaigns, they tended to be between two forces that were pretty much aware of each other's size, composition, and relative location.  "Gotcha" moves, so loved by gamers, were pretty rare on the strategic scale, and would be better represented in the final move to game table or scenario set up.
Boardgames represent a perfect example of excellent campaign systems.  They model campaigns in a fixed amount of tabletop space, and a very short amount of game time.  Miniature campaigns are handcuffed by the need for each game played out to be done on a tabletop, which requires a gathering of the group.  Theatre of War effectively gets through this problem by making most campaigns 3 games or so.
In my experience, after 3 games, gamers start to lose interest in a) the campaign, and b) the period for repeated games.
So - I'm thinking of trying a system using FoB2 (which has a scenario generation system) to create games, and link the games into a campaign of 3 games or so.  The campaign would have "Campaign Points", generated in the same manner as for typical tabletop games.  For a campaign, each side would roll 3 times on the Army Morale table, and the total would be their total for the 3 game campaign.  Each side would deduct their AMP losses in each game.  First side to 0 loses.  Simple!
I'm also tinkering with allowing players to select from pre-generated tabletop terrain sets.  This would introduce a bit more of a campaign feel, and give players input into the game layout.
Hmmm.  More thinking to do.
Posted by Brent at 8:55 PM 6 comments:

We played an ACW game last Saturday; ACW was chosen since Terry Shockey couldn't make the game.  Terry, Greg Rold, and Ed Meyers were instead participating in a DBA tourney down in Colorado Springs.   DBA?   I think I'll give them random Down 1 modifiers in our next FoB game. 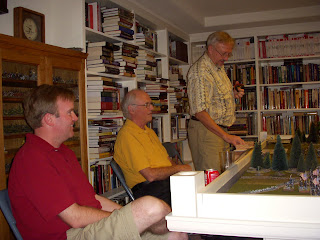 The Federal Command Team (left to right):  Eric, Bob Jones, Chris
Yes, that's right - THE Bob Jones.  It was great to have Bob at a game again.  The universe is in balance again.  He valiantly defended the Federal center with a single brigade and battery. 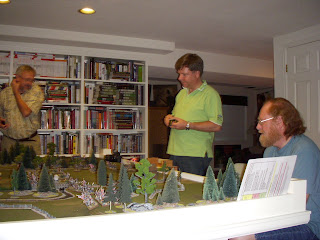 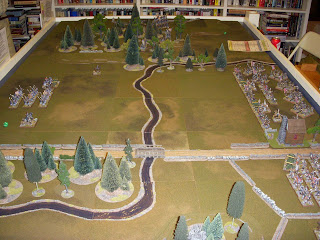 Overview of the battlefield at the start of the game.  The river was actually a meandering stream, a Class I obstacle (stop at the near bank, move full after that).  Confederates on the right. 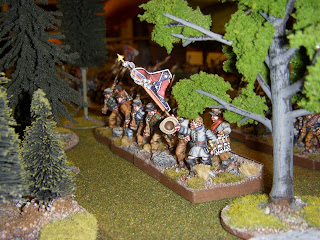 Confederates approach through the woods. 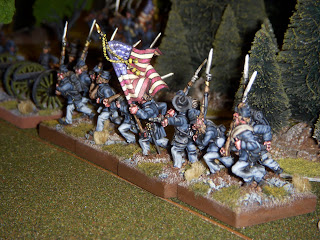 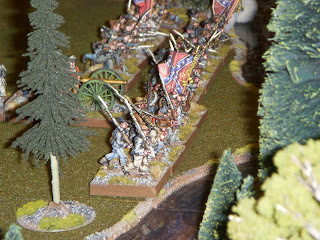 Guess who's coming to dinner? 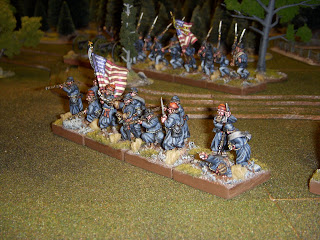 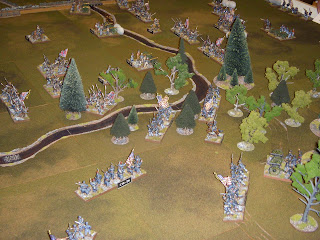 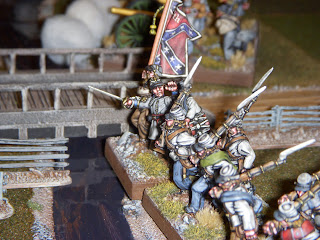 Confederates advance on the Federal right and right/center
Posted by Brent at 8:56 PM 2 comments: