Musings on Mother-in-law and the Eastern Front....

Well....today I was scheduled to take my Mother in law back home after her Christmas visit.  She lives around 200 miles away.   I was going to drop her off while my wife whipped the house into shape after yesterday's Christmas celebration.   One small problem....

The incompetent Denver weather forecasters neglected to mention a massive winter storm ravaging the eastern plains of Colorado.  We hit snow within the first 10 miles leaving home.  No problem, I thought - we'll drive out of it.

After averaging 50 miles an hour for the first hour or so (exceedingly slow for this drive - I usually average somewhere around 75 mph) through light snow in the dark.   Before you wonder if I'm a madman...I've literally driven this particular road (all 200 miles) a couple of hundred times.  I know it so well that I can tell you when a rancher has added livestock or when farmers are planting....

Soooo.   I get to Wiggins Colorado...and notice a sign that says "US34 closed at Otis".  What?  That can't be!  The blowtorch of the Rocky Mountains, KOA 850 AM has only mentioned a highway closure at a small town around 100 miles south of my destination and never mentioned any other highway closures....surely the sign hadn't been updated???

We forged on.   Still dark.  Wind started to howl.  Snow started to come down.   Took 30 minutes to go 10 miles.  Stopped for a few while the wind let up, decided to go for it and make the last 90 miles or so.  Surely US34 at Otis wasn't closed?

By this time it was light out.  This is where the Eastern Front reference comes in.  Remember all those Eastern Front shots in "World at War" where the camera man captured snow blowing, sifting and drifting across the plains?  Well, eastern Colorado bears a distinct resemblance to the steppes of Mother Russia.

Did I mention I have a 4WD?

That means - the road is blocked, no passage allowed due to dangerous conditions.   Just wonderful.  By this time, I'd been driving for around 6 hours through increasingly deteriorating weather.  All that stood between me and returning my Mother in law home was around 50 miles of bad visibility highway.

While I love my Mother in law, she's been at our house for a week.   Only 50 miles!!!!!  I'd have driven through the snow drifts off road to get her home if they would have allowed it!!!

So.  That's my story.  Stopped at Otis, Colorado.  Turned around and came home.   I get to be on the road at 4:45 AM tomorrow and do it all over again.  The Broncos play at 2 PM tomorrow.   I'm getting her home NO MATTER WHAT.

First of all - Merry Christmas to everyone!

I haven't had a chance to post as often as I'd like in December.  It always seems that a variety of family events takes up the month before you know what happened.

I've been working away on Austrian Napoleonics.  I'll post some individual unit shots over the next few posts.  For now - here's a shot of a just completed Hungarian infantry battalion still on their painting nails.  I super glue each figure onto a 10d nail, and then use the nail to hold and spin the figure as I paint it.  Nothing new, I'm sure.  The figure/nail holders are just 2x4 segments drilled out to hold the nails. 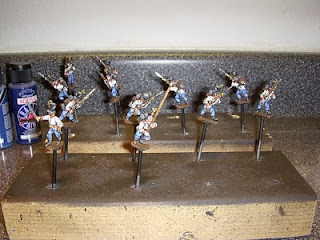 Up next on the painting list is an Austrian grenadier battalion.  After that?  Probably a Jaeger battalion, and then artillery and some officers.  For some reason, I always seem to do cavalry last.  I'm not sure why - I enjoy painting cavalry.  Maybe I just get psyched out by the perceived additional time to complete the unit.  As my cavalry units are 8 figures vs. 12 foot figure units, I'm not sure the total elapsed time is any different for painting the different unit types.

Really?   Is this some alternate universe?  Lose to the Raiders?  With the 3rd string QB?  With Tom Cable as head coach?  The Raiders?

This was one tremendously frustrating game to watch.  I can't fault the Broncos players for lack of effort.  They seemed to be "into" the game.

I can't recall a more conservative, mundane game plan on both the offensive and defensive sides of the ball for the Broncos...ever.  The Broncos' "braintrust" can't seem to figure out how to score if they get inside the 5 yard line...nor can they ever get creative enough to get a first down on 3rd and 1.  The decision to play LaMont Jordan as the 2nd RB is truly baffling....this guy hasn't done anything to be on the team, let alone get playing time.  Defensively, the coaches seemed content to play soft and not pressure the QB....why?  WHY?  You've got a 3rd string stiff QB that automatically rolled to his right in a panic anytime things went bad, and a fat JaMarcus Russell in the 4th quarter that totally falls apart when under pressure.  So naturally, the defensive calls featured lots of 3 and 4 man rushes.  WHAT???   Sometimes I wonder what coaches look at when they make game plans and calls in game.

The most discouraging thing is that this isn't a loss due to player motivation, or being overmatched in a position or two.  This is a loss that goes squarely on the coaching staff...and a leopard isn't going to change its spots.  "They are who we thought the were" in the words of the immortal Dennis Green.  I'm afraid that this overly conservative, unimaginative mess that the Broncos now are is really who they are, and who they will be...with this coaching staff.  Pretty sad.

I hate the Raiders.
Posted by Brent at 9:02 PM No comments:

The Stug from Hell...and Other Things

John Mumby had mentioned "The Stug from Hell" in his comment to my previous blog post.  Surely such a nickname requires further explanation? 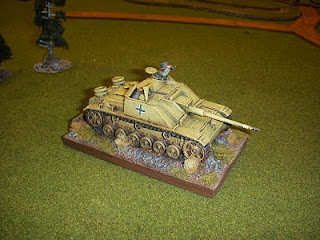 And there it is (above)....the "Stug from Hell".  This valiant vehicle received that nickname during an early playtest of a squad level WW2 game using FoB mechanics.  During the game, this Stug destroyed all the US armor on the table, moved from one end of the table to the other, destroyed US infantry units, destroyed some Greyhound armored cars...took some hits...shrugged them off...the US players commented that they couldn't "kill the Stug from Hell".   And now you know.....the rest of the story.

I need to get back to that squad level game.  It was a fun game, but I put it on the backburner to write FoBWW2.  If I worked on that game before doing FoBAncients, I'd probably get lynched.

I'm currently working away on my Austrian Napoleonic army.  I'll post some pictures as it nears completion.  In the meantime, here's a variety of different things.... 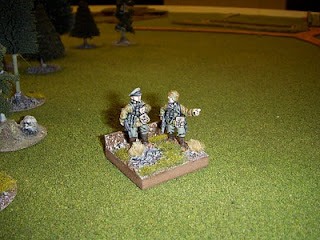 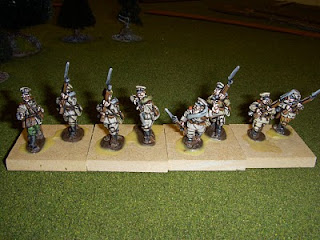 The Broncos play the Raiders this Sunday.  The Raiders are a shadow of their once proud organization...but I still hate 'em.  I hope the Broncos hang a whippin' on 'em.   Talk about dysfunctional - the Raiders have the first pick in the draft a couple of years ago and pick JaMarcus Russell for their QB of the future.  What a total bust.  He's now 3rd string and Charlie Frye (WHO???) is starting against the Broncos.  Blowing a pick like that and getting saddled with the #1 pick salary in a capped sport is the quick way to a decade of incompetence.   Way to go Raiders!

And Now for Something Completely Different....

Well, after a 4 game losing streak, the Denver Broncos have righted the ship and are now 8-4.  The undefeated Colts are next.  Surely a Bronco can beat a Colt???

On a somewhat related note, my wife and I were having dinner at a local restaraunt last Friday night.  An older couple was seated next to us - I didn't really pay attention.  I looked over later and was surprised to see that it was Red Miller - the Denver Broncos head coach when they went to their first Super Bowl after the 1977 season.  Very cool!

I'm currently painting Napoleonic Austrians, with a Hungarian infantry battalion underway.  I thought I'd switch it up a bit with some photos of some of my WWII stuff I use for FoB:  WW2.  Just armor and AT Gun this time... 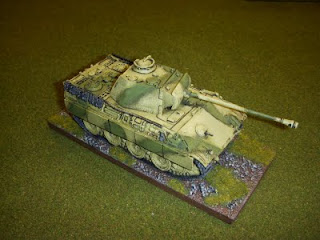 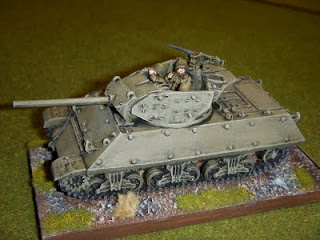 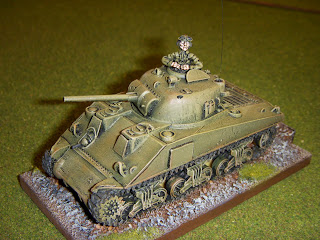 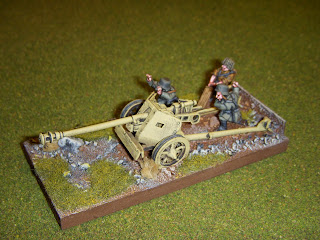 How about some feedback?  I haven't put stars/crosses on my tanks...part is because I don't have a 1/60 source of decals, part is because most photos I've seen show that tankers didn't really want easily observed markings on their tanks (nice aiming points!).  Any opinion out there?  To mark or leave unmarked??