I've been dissatisfied with the version 1 markers I made to show "bunker" units in FoBWW2.  The version 1 marker was 3" wide to match the unit frontage, but beyond that it didn't do much visually for me.  Its the small piece in the photo below.

Version 2 is made to just drop the infantry unit into the marker...and bingo!  Instant dug in/bunker status.  The entrenchment is made of 3/4" wide quarter round epoxied to a plastic base.  I think they're a big step up in appearance.   AT guns will use the same thing, but adjusted to fit their stand.

I've sketched out a similar construction method for things like ACW entrenchments, horse and musket redoubts, and WW1 trenches.   I'll be making some up to see how they look and work. 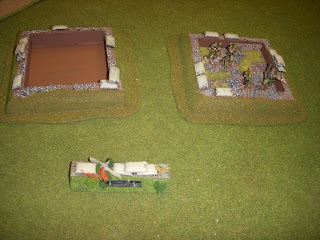 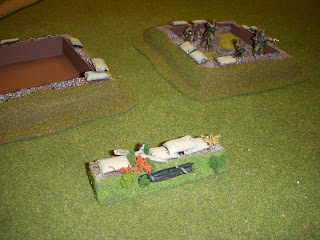 I'm taking the first three days this week off as vacation - I had some extra days to get in this year and thought it would be good to make some progress on some hobby stuff.

So far, I've completed Austrian Napoleonic artillery, Austrian command, created dug in/bunker "markers" for FoBW2, and rebased my entire WW2 collection, as well as created numerous terrain pieces.  Unfortunately, that has been sandwiched around yet another pathetic Denver Bronco effort, but enough of that!

I decided to rebase my WW2 stuff because the previous 3" wide by 1.5" deep stands just felt to linear to me.  I wanted more of the depth illusion of a company deployed 2 platoons up/1 back, etc, so I rebased all my infantry to 3x3 inch stands. 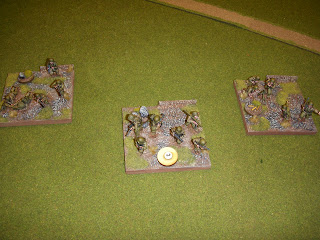 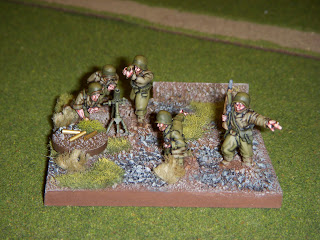 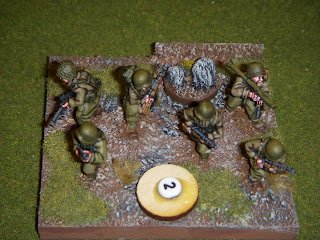 The top photo shows a US infantry battalion of 3 companies.  I just love the "chunky" feeling of the bigger stand, and I think the look is what I was going for.

The markers on the stands are some experimentation on marking losses/status.  The 2nd photo shows the "fired" marker, which is a round terrained piece with shell casings on it.   I'm still torn between which way to go for loss (UI and Pinned) markers.   I could use round markers with no stones (Pinned), 1 stone (1 UI loss), 2 stones (2 UI loss), or be more direct and use round markers with S, 1, and 2, on them.  Unfortunately, the "2" example marker doesn't have terrain on it yet for the photo.

Any preferences?  I think the stones would be less visually obvious, but given the fact that players need to see loss/status, maybe the numbered/alpha markers are a better method.
Posted by Brent at 4:19 PM 2 comments:

I doubt that I'm much different than most gamers...my game table becomes a catch all in between games.  Here's a couple of photos of what it looks like now. 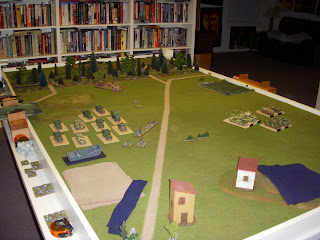 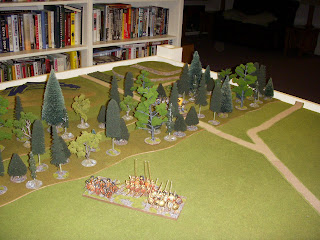 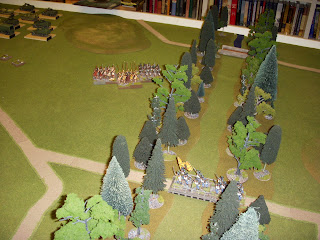 As you can see, a bit of everything.  The terrain is generally set up for the next game, but not quite...need to finish some river sections.  WW2 armor being rebased shares the table with some ancients (PoB) and an Austrian Napoleonic battalion crossing a "river" (or where the river will be).

I'm currently working on new tree pieces, painting Austrian Napoleonic artillery batteries, and rebasing WW2 stuff.  Lots of fun, a variety of projects, and not a ton of progress on any of them!
Posted by Brent at 3:53 PM 6 comments: