Wow - I'm almost posting regularly!  It has only been 5 months since the last post....

We (Piquet Inc.) are just about ready to release Eric Burgess' fantastic set of siege rules, titled "Vauban's Wars".    You can read more about VW on Eric's blog:  https://dinofbattle.blogspot.com/

There is also a set of casino quality cards that go with the game.

Both are available for pre-order here: https://www.piquetwargames.com/physical-historical-supplements

This set will become the standard by which all other siege games are measured.  Eric has done a fantastic job with the rules.

The other "new" set is Field of Battle, 3rd Edition.  Conveniently enough, the rulebook, sequence cards, and campaign tactical map cards are also available at:  https://www.piquetwargames.com/physical-historical-supplements

On new game development news, I'm working away on the WW2 tactical set - titled "Nothing Less Than Victory".   In this game, the basic unit of combat is a single stand squad (for infantry), a single stand weapon section (representing 2-3 weapons) and a single stand tank or vehicle (representing 2-3 vehicles).   It's pretty easy to get a full battalion on the table, and the game plays quickly.  My expectations are to have NLTV complete and published by early spring 2021.

I've also been doodling ideas for a couple of other games - a WW2 air game that is semi operational, yet also features rapid resolution of missions, allowing for encounters and dogfights.   I'm working on my 1/285th plane collection for this game, but have a ways to go before it gets more fleshed out.

I'm also jotting down ideas and procedures for a high level WW2 game where the basic unit for combat is the battalion.  In effect a player would be commanding around a division in the game, but there's no reason he couldn't command more.   I think it would be ideal for the Western Desert  or Russian campaigns.

And in the midst of all this "work" (its not work - its PLAY), I'm making great progress on my current miniatures painting progress - large ACW cavalry forces.  I'm making 12 mounted and dismounted cavalry units for each side.  The Confederate mounted forces are done and the Federal mounted forces are 2/3 done.  The dismounted units should paint much quicker.   I've always been fascinated by cavalry in the ACW and how it developed and was used.  Tons of interesting scenarios!

I'll start posting photos of my "pandemic" collections.   I finished (although nothing is ever finished) my SYW armies, rebased all of my ancient armies, mounted up armies for the WW2 battalion game, and did some more painting for my 25mm WW2 forces.   Pics to follow.....

Field of Battle, 3rd Edition is now available for sale via the piquetwargames.com website. 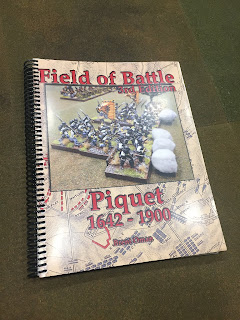 We are also selling casino quality cards for the game - a set of sequence deck cards for FoB3 and it's campaign system Season of Battle, and a separate deck of cards with battlefield maps for use with Season of Battle. 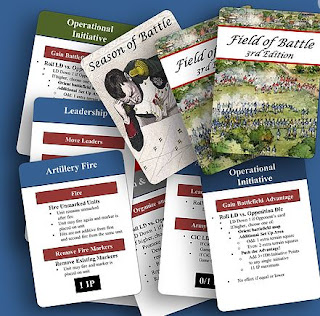 This project has taken a long time - I think I probably started working on this 7-8 years ago.   A lot of work, but very enjoyable to go through the development and testing!

There's more discussion on the io group https://groups.io/g/PiquetFieldofBattle or on the Facebook page https://www.facebook.com/groups/201897673911387/
Posted by Brent at 8:51 AM 4 comments: