Broncos are SB50 Champs!   Awesome performance by the #1 defense in the league. 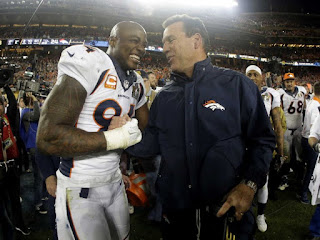 My official prediction for the Super Bowl tomorrow:

Peyton Manning has one more "good enough" game left in him, going 22 of 34 for 274 yards and 2 TDs, earning the Super Bowl MVP award and a ride into the sunset and retirement.

I think it is laughable how little credit is being given to the Broncos, and how few are picking them to win tomorrow.  This is a team that played 7 games without its starting QB, played 5 or so games with its starting QB injured to the point it affected his play, and a team with a defense that lead the league in defensive performance and statistics from the very start of the season through to this point in the playoffs.

I believe the lack of respect is due to the lopsided media love affair with Cam Newton for the Panthers.  While he's a great player, Super Bowl history is full of teams with good to great offenses built around a single player (QB) that gets throttled in the championship game.

I've seen a lot of Super Bowls from the Broncos perspective, and you get a feel for when a team is too tight, too busy telling everyone how the spotlight isn't going to bother them (see the Broncos vs. Seahawks, Broncos vs. Giants, Broncos vs. 49ers.....).   The Panthers look to me to be too concerned with appearing loose.  We'll see when the curtain goes up.

The Broncos played a much tougher schedule, compared to the Panthers (playing their own putrid division teams twice, and the AFC South teams - either the worst or second worst division in the league).   A soft schedule and big wins don't temper a team for a Super Bowl.  In the playoffs the Panthers first played the Seahawks, who were exhausted from an overtime, sub-zero temperature game the week before, and then the Cardinals, who looked like they were just looking for a place to fall down, bickering with each other on the sidelines.  The Broncos?  Beat the Steelers and the Patriots, both games tight and hard fought.

I'll be here to enjoy the victory, or take the abuse if I'm horribly wrong!
Posted by Brent at 7:48 PM 1 comment: