The first quarter of the year was spent finishing up our 2 year renovation of our house.   As we completed that project, my wife Lisa's knee kept getting worse and worse.

Which leads me to the main item from 2016 - Lisa's total knee replacement surgery in May.  We thought we were prepared, but I don't know that anything could have prepared us for the pain after the surgery and the seemingly endless rehab and strengthening.  Keep in mind, we're both very healthy and fit, working out regularly, so she had great muscle mass to help out to begin with.  However, it was still very difficult for her.   Eventually, after having a manipulation to break loose scar tissue that had formed (how that formed, given the near constant rehab work, is beyond me!), and moving from rehab to strength regaining exercises, she's pretty much pain free.  Now its just stiffness at times, and tightness that we've been told "should" pretty much be gone in another 6 months or so.   I'm very proud of her for all her determination through the process.  It would have been far easier to just quit and live with limitations, but she was driven to get back as much as possible so that she could ride her motorcycle!   We finally got in a couple of rides in October and November, which really helped her morale as she was thrilled to know that she could ride again.

On the rules front, I have "Nothing Less Than Victory"  (WW2) nearly done, with 90% of the FoB campaign system developed.  I have "Rusty Buckets" developed in my mind, as well as thoughts for air games, finishing up "Give Fire!", and other projects.   While rule writing is a big task, I just can't seem to stop wanting to do more games.  Its a sickness....

I've been able to get back to painting, finishing up some units for my ECW stuff around Thanksgiving, and now turning to the beginnings of my Wars of the Roses collection.

And of course, there's always the Denver Broncos.  It has been a struggle this season, as injuries and a new QB have provided more challenges than had been anticipated.  Technically, they're still in the hunt for a playoff position, but it really doesn't mean much as this year's team won't be in the playoffs for long even if they make it.   The silver lining is that the probable 3rd place finish in the division means a much easier schedule next year, as well as better draft choices.   Seasons like this really make one appreciate Super Bowl seasons!

I wish all of you well, and a safe and fun holiday season!
Posted by Brent at 7:07 PM 1 comment:

I've been a subscriber of WI and MW for as long as they've existed.   MW has recently changed, and WI changed a while back.

I was always taught that if you don't have anything good to say, don't say anything.


My next blog post will include photos of the WSS game from our session last Saturday.
Posted by Brent at 8:01 PM 4 comments:

The group got together yesterday for two games - first a game of Give Fire!, the mini-supplement for the ECW using the Field of Battle 2nd Edition rules, and then a WSS mega game with over 50 units on the table.   I just discovered that I forgot to take any photos of the WSS game, which is a shame - it was a beautiful game with wonderful figures from the collection of Eric Miller and Greg Cornell.  Loads of Brits, French, Spanish, Danes, and maybe some others I'm forgetting.   I believe that Greg and Eric have photos.  I'll either post a link to a blog with those, or if I get any photos, I'll post a new post with WSS photos.

The ECW game featured two small to moderate sized armies - 8 units of foot, 4 units of horse, and 1 artillery unit each.

The game played well, with the Royalists winning a close fought battle.  I've made some tweaks to the rules to reflect the period tactics and limitations, and made some more adjustments based on the game play.  It was great to see the ECW armies on the table for the first time! 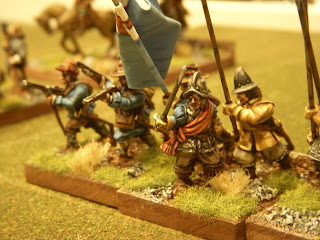 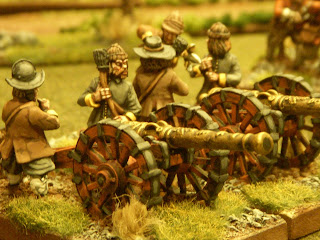 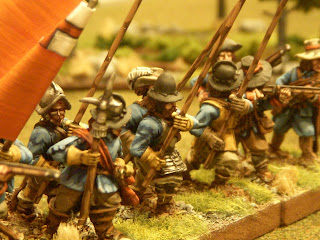 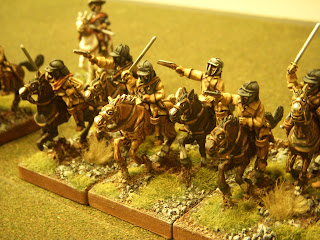 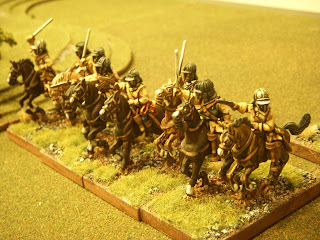 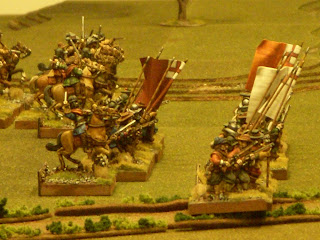 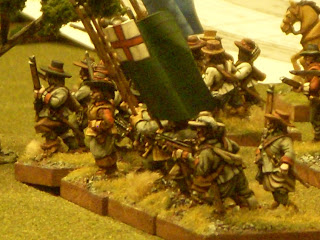 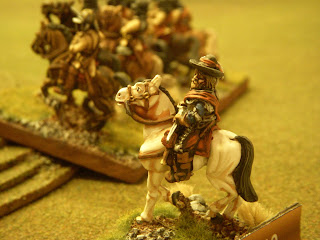 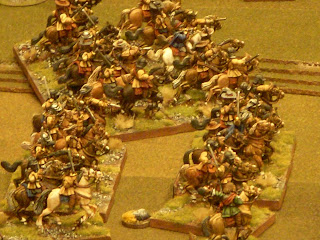 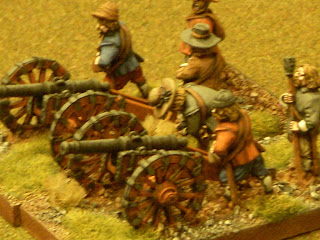 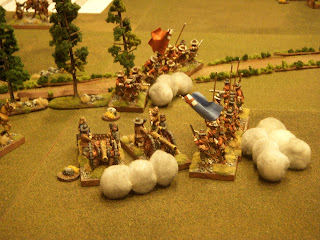 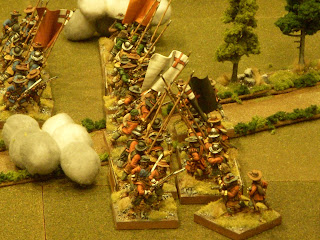 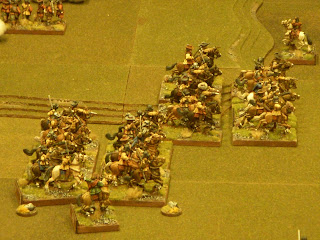 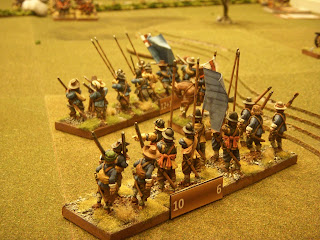