We played a Napoleonic game of Field of Battle last night - based on the battle of Hagelberg in 1813 between essentially a Prussian Landwehr division and a conscript French division.  I've never played a game with more bad (D4 Defense Die!) troops on the table.  It made for a very interesting game.  In the actual battle the Prussians soundly defeated the French.  Would the same hold true for our game?

Players were Chris Caudill and Greg Rold commanding the Prussians, with John Mumby and yours truly handling the French.

The Prussians had 12 infantry battalions (9 Landwehr and 3 Regular....or at least they were supposed to be Regular.  Turns out I screwed up when I rated them and the Prussians had all 12 units with D4 Defence dice!), 3 cavalry regiments, and 2 artillery batteries.  This was the debut of this portion of my newly based and finished Prussian army.

The French had 9 infantry battalions (5 regular and 4 Raw), 2 cavalry regiments (the studs on the table - 12+1 Combat Die for both!!), and 3 artillery batteries.

I'll use my usual photo report to follow the action.... 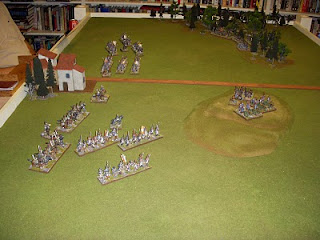 French deployment - artillery on the central hill with infantry in support.  Prussian right wing lurks in the Class II woods at the top right of the photo. 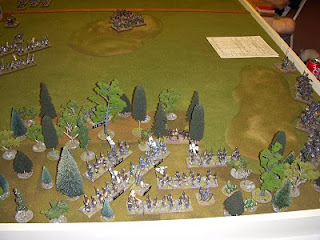 Prussian left lurking in the woods on the opposite flank.  Lots of Prussians lurking....twittering away like woodland creatures in the trees... 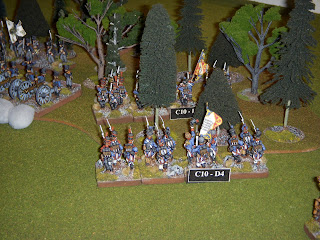 Genl. Mumby's French on the French left roll for a triple move and close into the woods...clearing the tip of the woods and pushing the Prussians back.  You can see one of the intimidating 10/4 infantry units following up into the woods. 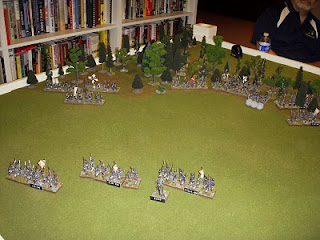 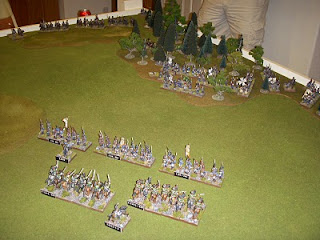 Meanwhile, the French (go Brent go!) face to confront the Prussian swarm in the woods.  Note the two French 12+1 cavalry units, led by a 12+1 officer.   That's my kind of cavalry! 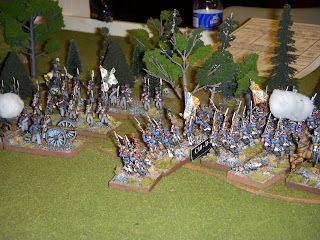 Genl. Mumby's assault on the woods surges forward.  Genl. Mumby will do anything to get into the woods. 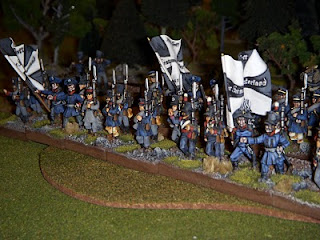 Prussian Landwehr facing the French on the French right flank.  Genl. Caudill ponders how to destroy my French command. 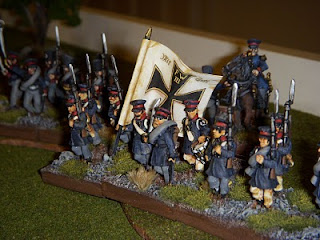