Despite my best intentions, it seems to have been a couple of weeks since my last update.

Quite possibly, its the altitude here in the Denver metro area that has befuddled me and left me off of my game.   At least, that's a theory that Al Gore seems to believe in.

Sometimes its just hard to muster the enthusiasm to blog when other projects are rolling along.  Pulse of Battle is entering the final stages of final draft writing, prior to submission to my hardy band of editors.   I've also been furiously painting Romans for PoB games (photo below). 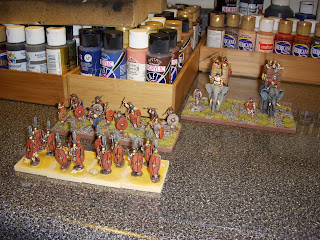 Other than that, I've been doing a ton of reading on the Punic wars and the wars of the Successors.   I'm drawn more and more to the Successor/Late Hellenistic era - quite the paper/rock/scissors of troop types and capabilities.

I've also been doing more and more in depth study of the Wars of the Roses, along with acquiring more books (!) on the era.   The names and lineage of the key characters is slowly starting to sink in.  You must forgive an American for confusion with all the names and titles!

I do find myself feeling that Richard III may have gotten the short end of the stick, so to speak, from the Tudor's PR machine.   He's certainly and interesting character - I'm fascinated to see what comes of the archaeological dig purporting to have found his burial place.

On to the Broncos - Patriots game tomorrow!   It is SOOOOOOO nice to have a REAL quarterback in a Broncos uniform again.  Should be a great game, although I do believe that the Broncos have their work cut out for them.