Arriving at the LBH battlefield for the first time is odd...you're driving up I90 without realizing that you are in fact driving right through where Reno's dismounted skirmish line was deployed, and right in the vicinity of the huge pony herd and village area. 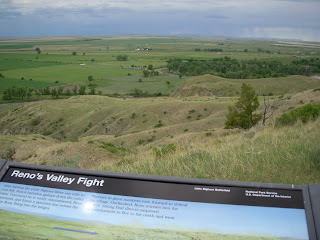 Reno's battalion swept down the valley from the left, dismounting at the area of the present red roofed buildings in the upper right of the photo.  The buildings are immediately to the east side of I90.  The photo is taken from the bluffs to the east of the river. 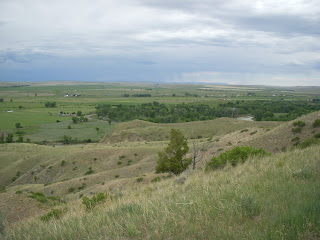 Another view of Reno's position from a slightly different position.  Trace along the line of I90 until you see the red roofed building, and that's Reno's dismounted skirmish line position.  The tree area to the east of that (closer to your viewing perspective) is the wooded area adjacent to the river that he fell back to as the pressure mounted from the Indian warrior's assault. 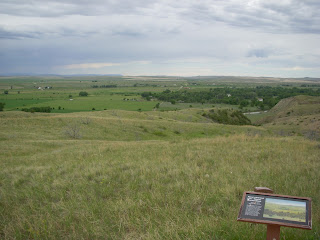 Another, wider angle, shot from a different angle.   Again - look for the red roof building to locate the skirmish line position. 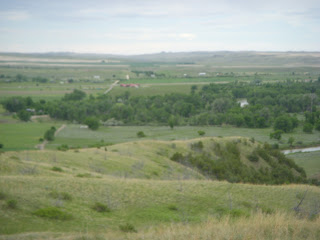 A zoomed in photo of the red roofed buildings where the skirmish line was located.  Sorry for the slightly fuzzy focus....zoomed in and a windy day.


After "charging" down the valley, dismounting to a skirmish line, and then falling back into the woods, the next phase was a generally panic stricken rush to "get out of Dodge" and get over the river and up onto the bluffs....to perceived "safety".  Not one of Reno's finer moments.... 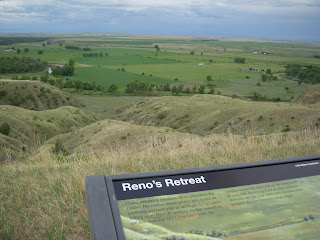 You can see the flat area on this side of the river that Reno's fleeing troopers crossed over to, and the rugged ravines that they faced as they ascended to "safety". 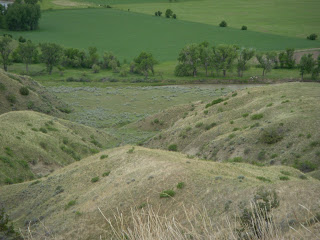 A closer look at the area. 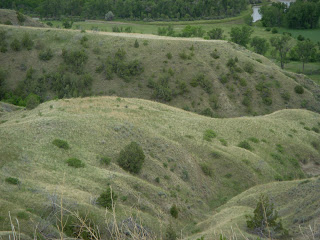 A closer view of the hills, folds, and ravines that the troopers fled up to get to the bluffs.   Hard to recreate this terrain on a wargame battlefield.

One can only imagine the sheer terror the troopers felt - a frontal assault gone bad, seemingly hordes of warriors boiling out of the village, the redeployment into the wooded area and then the panic stricken rout to the river.   If they managed to survive that far, they then had to get across the river and up to the top of the bluffs.    It's easy to see why Reno's battalion was effectively spent and ineffective after this experience.