After failing to force a ford at Medicine Tail Ford, Custer's battalions came under increasing pressure from warriors starting to flood across the LBH river.  The Troops fell back uphill onto the southern end of Greasy Grass ridge, generally aligning around/near the knoll that would become known as Calhoun's Hill.

This portion of the battle tends to be more confusing to me, as the only eyewitnesses were either the Indian scout Curley (who observed some of this action before skedaddling) or the Indian warriors themselves.

In general, I believe the battalion made its way to higher ground, with Calhoun's L Troop generally facing to the rear in the direction the Battalion had just come from.  In effect, they were the rearguard of the Battalion, as the other Troops faced southeastward toward the river.  Calhoun's L Troop appears to have been on higher ground, with other Troops deployed on lower ground toward the mass of warriors coming up from the river.  Calhoun's L Troop seems to have been a rock of resistance, and stood their ground for some time.   On the reverse slope of Calhoun's Hill (in general locational terms), Keogh's I Troop was placed as a reserve in waiting.   At some point, Calhoun was overwhelmed by the volume of fire from the dismounted warriors, with a handful of survivors fleeing up Greasy Grass Ridge toward Custer's location near/at "last stand hill".  Tom Custer's C Troop may have been somewhere between Calhoun's Hill and the warriors coming up from the LBH river, at some point moving on the lower slopes of the Greasy Grass Ridge to joing back up with GA Custer and the command element, along with F and E Troops.

I don't think that Keogh's I Troop put up too long of a resistance.  I believe that after Calhoun was swamped, the attacking warriors swept over the hill and took I Troop in a hurry.   The cluster of fallen markers for I troop doesn't look too much like an organized position to me, nor are they in a position that anyone would choose as a good defensive position.

Anyway, on to the photos! 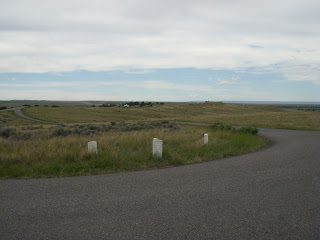 A view from the approximate middle of Calhoun's position on Calhoun's Hill, looking up the ridge toward Custer's final position on "Last Stand Hill".  You can see the monument on the knoll in the distance.  The warrior's primary attack would have come up from behind the camera and to the left of the camera.   Keogh's I Troop would have been off to the right corner down hill from L Troop.  C Troop would have been downhill and to the left. 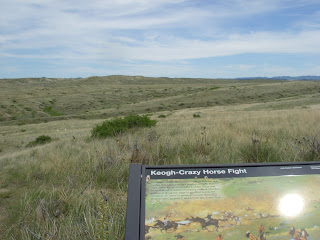 A view towards Keogh's I Troop.  The markers for the fallen troopers are in the distance - look up from "Crazy" on the plaque. 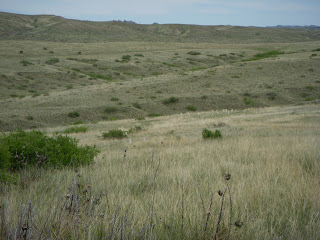 A closer view of the markers.  Note the handful of markers towards the left of the photo.  I believe these would have been a handful of troopers either trying to escape towards Custer on Last Stand Hill, or possibly a small element dispatched by Calhoun or Keogh to make contact with Custer, before the end came for their Troops.