This was game three in a three game 1809 French/Austrian Napoleonic campaign - played last Saturday night.   The Austrians won a marginal victory in battle 1, the French had a crushing victory in battle 3, and the fate of the campaign hung in the balance for battle 3.

The French followed Marshal Rold's deployment to the "T". I think this created some initial opportunities for the Austrians as they exploited their superior deck and CiC (12+1) to set the tone and tempo of the battle. The Austrians closed on the French left, while holding their own right with a slim force of a brigade (Ed's) of Hungarian infantry and their 3 cavalry regiments.

Greg's Austrian assault at the hinge of the French line at the corner of the ridge near the French baseline succeeded in destroying half of the French artillery and creating a hole.....that couldn't be exploited. Greg's assault force was severely punished, and spent the rest of the game rolling to rally, it seemed. Meanwhile Chris closed with the largest Austrian infantry force on the far French left flank, and also deployed a grand battery on the ridge running across the width of the battlefield. Things looked bleak for Eric, the French commander of the French left.

General Shockey was perfecting the "ooze" assault method, as his strong force of French infantry and all the cavalry stumbled their way from the far French right to put pressure on Ed's troops. About this time, national Bavarian hero, John Mumby, launched an assault down the valley towards the remnants of Greg's assault force. This seemed to throw all kinds of kinks into the Austrian planning.

Chris methodically set about dismantling Eric's French - who gave as good as they got on the French left.

Ed launched his Hussars in a gallant attack down into the valley towards the Bavarian infantry's flank.....only to suffer a 3 UI loss from French and Bavarian artillery on the far ridge. So much for the Austrian cavalry trying anything aggressive from that point forward.

By this point, it looked like the Austrians had it in the bag. The French were down to their last couple of morale points, as Chris kept the pressure up on Eric's French.

Suddenly, out of the mist, from the land that time forgot - General Shockey's ooze assault burst onto the hill held by Ed's Hungarians. Before they could reach the Hungarians, the French surrendered their first chip to the Austrians!!!

The French hung on, not turning an Army Morale card, as Terry's assault mangled Ed's command.

At this point, the French were at 0 morale points, and the Austrians had 2!

Initiative to the French....first card - not an Army Morale card.

Chris rolled the D12 for the Austrians and rolled an 8. OUCH.

Terry nervously picked up the D10 (for his CiC) and got ready to roll the test.....needing a 9 or 10 to continue, and possibly swing the morale points over to the French side.....he rolled an 8! Tieing the Austrian roll of 8, and ending the game!!!!

At this point, the Austrians won a marginal battle victory with 2 morale points left out of 24 at the game start. The French were at 0 out of 23 at the start.

So - for the campaign, the Austrians won 2 marginal victories, sandwiching the single crushing French victory.

The French started the campaign with 66 Campaign Points and ended with 12.

The Austrians started the campaign with 68 Campaign Points and ended with 3.

So - the Austrians won the battle count, but lost the campaign season due to the single crushing French victory!!!

We figured that the Austrians would happily quit the war and sign some meaningless treaty, while planning on renewing the war on the French at some future point. You've got to give the Austrians credit....they mastered the art of both quitting, and not quitting.

So - here are my overall thoughts on the campaign and the battle:

I'm happy with the battlefield selection process and the set up.

I kind of miss a campaign map, but I definitely didn't miss the work. Its enough work keeping the few records that were in this campaign.

As for the battle:

You're very optimistic if you hope to march a grand battery onto its position and deploy in time to do much of anything. The Austrians managed to, but had a great deck.

Don't roll a 1 for movement.

The Austrians never used their 12+1 CiC to help rally Greg's sole intact infantry unit and silenced artillery battery. I think the 1 in 12 odds of getting eliminated are offset by the much better chance of rallying with a D12+1 vs. a D8, and the addition of those 2 units in a healthy state would probably have forced John's Bavarians to think twice about coming down the valley. 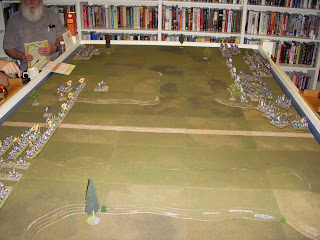 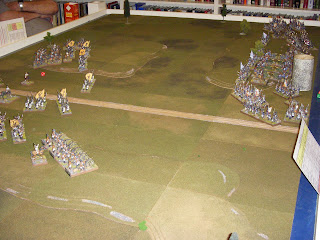 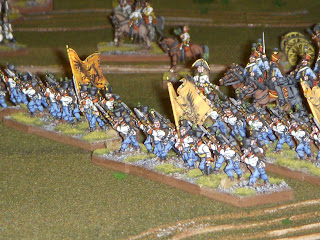 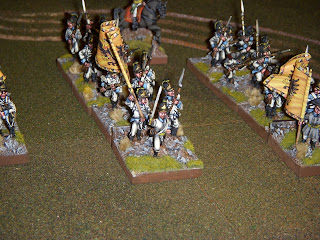 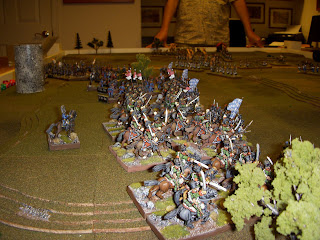 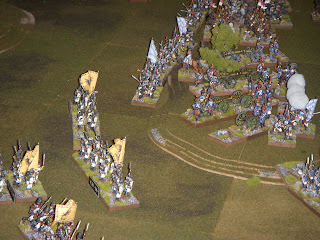 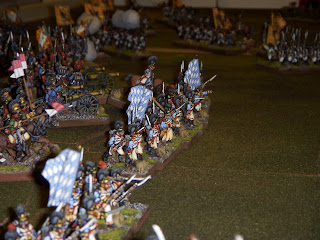 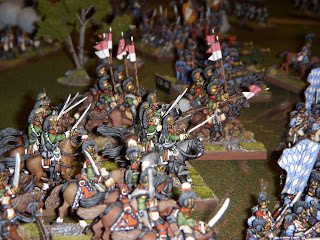 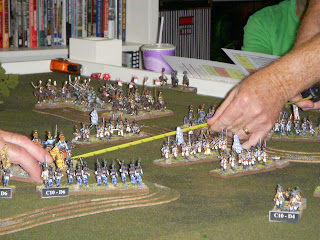 Sorry for the delay in getting this final post up for the LBH battlefield tour.   Real life has a way of intruding on blogging...

I'd like to finish with just a couple of photos from the Benteen/Reno siege area, and sign off with some random thoughts about the battle. 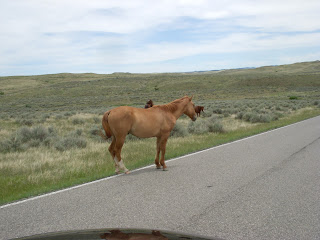 Could it be Keogh's horse Comanche?   No....just a free roving horse, looking for food from tourists on the path down to the Reno/Benteen siege site. 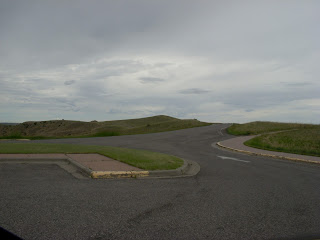 So much for controlling the high ground.  This photo is from the northern end of Benteen's position, looking up and out toward Weir's Point.    You can easily see how simple it was for the warriors to hunker down behind slopes and ridges and just pop off at the cavalry without exposing themselves. 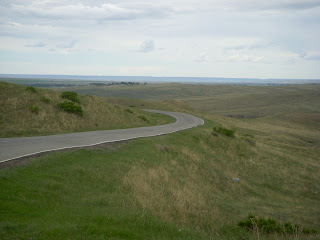 View from weir's point toward Last Stand Hill (look toward the horizon, above the roadway, to the right of the area of trees around the visitor center).   This is a photo zoomed in about 10X or so, giving an approximate perspective that Weir and others at this point would have had of the final stages of the battle on Last Stand Hill.   Personally, I think any of their observations about seeing Indians doing this or that, or waving guidons, is entirely created after the fact based on what they found out after the battle.   With dust from the battle, and the distances involved, I'm highly doubtful that they really saw much of anything that they could make out.

So - some random thoughts wrapping up my fantastic visit to the LBH battlefield.

1)   If you ever get a change - GO!  It is a great battlefield to visit, and very haunting.  This is one of those battlefields that gives immediate enlightenment about the battle once you see the ground and visit the area.    Highly, highly recommended.

2)  Sheridan Wyoming as a short drive of about 60 miles to the battlefield.   There are plenty of places to stay - we stayed in the new Hampton Inn and were very satisfied.   I can't say much for the food in Sheridan, though.   I spent almost $90 for a dinner for two (steak) at the "best" place in Sheridan, and the steaks tasted like mule hooves.    Our second dinner in Sheridan was at Pizza Hut.   Nothing fancy, and the place smelled slightly odd like all Pizza Huts, but the food was good and dinner cost $20.

3)  I've read often comments like "if only Custer had taken the Gatling guns".    Really?   Really?   How was he going to get them there?   His pace would have been glacial, and he wouldn't have had a chance of catching up to the village.   Additionally, the Indian warriors weren't stupid.  They didn't fight like Zulus or Mahdists.   Massed charges weren't a Plains Indian warriors "cup of tea", until they were certain that they would be successful.    Let's assume that the Gatlings were there - most likely they would have been with Reno.   OK, so what?   I don't think he would have been dropping warriors like flies as they mindlessly charged the Gatlings.    Most likely the warriors would have just spread out and enveloped the Gatlings and "boom", drop them where they stood.   I really don't see much of an effect from the Gatlings on a highly dispersed target they would have been facing.   These weren't WW1 Maxim guns, but Gatlings with a fairly fixed cone of fire.

4)  Custer and his troops were exhausted on the day of the battle.  I've ready many estimates that Custer might have only had an hour or two of sleep in 36 hours.   I was up for 32 hours one time for work, and I can tell you - you're mind just doesn't work right.   It takes much longer to make a decision, things don't sink in, and you almost feel numb.   True, adrenalin would have kicked in for the troopers, but still - a bad, bad situation to put yourself into.

5)  The distances on the battlefield were VAST.   In my mind, the chief failure of Custer once he pitched in was to think there was ANY chance of Benteen making an appearance and affecting the battle.   I'm not thinking about any person vendettas by Benteen slowing his approach, etc, but just the large distances involved and a simple time/motion study of how long it would take him to get to where Custer wanted him.   It just wasn't going to happen.

6)   I wonder if the 7th had been brigaded with an infantry regiment, or few infantry companies, possibly mounted, if things would have worked out differently.   Indian warriors didn't like coming up against infantry ("long rifles") because of the long range of their weapons.    An interesting "what if".   I think the biggest issue is that the infantry would have slowed the column (see the Gatling discussion above).

7)  In my opinion, Custer wasn't incompetent, and he wasn't an idiot.   He was a fighter, and he finally got the target "cornered".   He wanted to enhance his reputation, but he wasn't stupid enough to throw his life away on something he considered suicidal.   I think the lack of battle preparation (rest, reconnaissance) led him to make some bad assumptions about the scope of what he was getting into.  From the flow of the battle it looks like he was in tactical control until towards the end of the battle, looking for opportunities to dictate the tempo and flow of the battle.   He just ran out of time and resources, and the final result was inevitable.