The beauty of having a blog is that you can write as much for you as for anyone else.   There are no deadlines, no editors, no work pressures.   With that in mind, this blog post is for me!

Things I like in the hobby
by Brent Oman

1.  Mounted mapboards in boardgames.  I admit it...if a boardgame has a mounted map, I'll buy it.  I think it goes back to my childhood and the thrill of opening up the latest Avalon Hill game and unfolding those glorious mounted maps.   A paper or card map leaves me totally cold....but a mounted map?    Yowza - I don't even care how much the game costs...sign me up!

2.  Command control in rules.   To me - this is what a game is about - the command decisions forced onto players.  Do we really have the same decisions as generals?  No.  But - games that force tough decisions, or even better, force a choice between two bad decisions - those are the games for me.  Games without any friction or command consequence leave me cold....brrrr.

3.  Terrain that looks like terrain.   I appreciate those with a fine eye for detail, or more importantly, a flair for character and "pop" in their terrain.  That can be done with hexes, with ground mats, with squares...doesn't matter.  If the person obviously had some real soul poured into their set up, it shows.  Don't ask me to say that a game on lime green painted plywood with masking tape roads looks good....

4.  Figures and units with movement and animation.   I love units that look frantic, jumbled, and active.  In my minds eye, thats what a combat unit looks like.  Not a stately marching band appearance, all with the same pose.

6.  Military history books with good maps.   I don't care what the subject of the book is - if it has good maps, I'm buying it.

1.   Weird War, Zombie games, Mexican druglord games, gangster games....take your pick.   My life is busy, and when I game, I don't want my time to be wasted with "silly" topics.  Does that mean that I'm a "serious" gamer?   Hardly - the only reason for the game is to have fun.  But I think there's a huge gap between fun and silly.

2.  The smell at Historicon.  I admit, its been a couple of years since I've been to Hcon....but I can still remember the stench.   Ugh.   Its not that hard people.

4.  Figure scale flame wars.   Is there a more useless waste of energy?  I've seen gorgeous 10mm games, brilliant 15mm games, beautiful 25mm games, breathtaking 40mm games....the choice of figure scale is entirely personal, and hardly a thing to debate.  I've settled on 25mm for all my periods because of two simple controlling factors - I don't enjoy painting anything smaller than 25mm, and by keeping to one figure scale, I can keep one set of terrain.   So - if you love 6mm, or 2mm or 71mm - great!  Please just make the games look nice.   See 3 above in "Things I Like".

5.  Jay Cutler.  Is there a bigger loser in the NFL???  Wow - did the Broncos do the right thing shipping that quitter off to the Bears.   Million dollar talent and a nickel heart.   Its like Jeff George has been cloned and is in the league again....

6.  Painting "competitions".   Huh?   Since every painter has his own style, and judges have their prejudices, I hardly see the point.   Does everything have to be a competition?  Why can't there just be painting displays?  I'd love to see that - how many don't enter "competitions" but would be happy to enter a "display"? 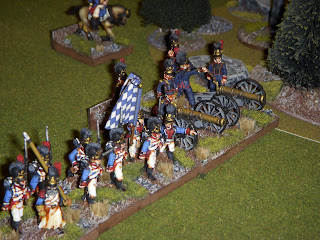 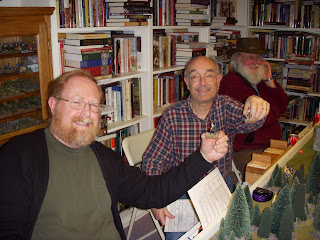 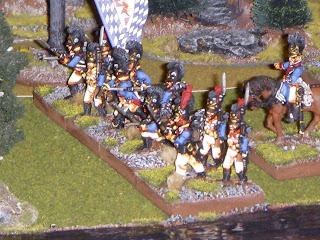 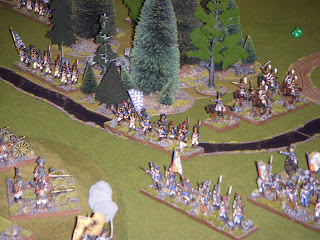 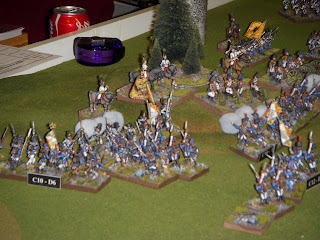 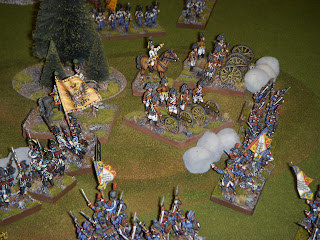 The French crush the center.  Only the gun batteries remain as the French surge up the hill.
﻿Fun game, but the French really smacked the Austrians.  The scenario generation gave the French a 30% numerical advantage.  The Austrians spread their commands out fairly evenly, resulting in 1/3 of their army never being engaged.  The French used their Bavarian allies to shield that portion of the army, and then methodically crushed first the Austrian right flank and then the center.  A crushing victory for the French, who ended up with only 2 fewer Army Morale Points than they started the game with.
Posted by Brent at 9:21 AM 2 comments:

Continuing the game report ....(sorry for the delay - a rather hectic week at work, and here it is Sunday night and another week looming!). 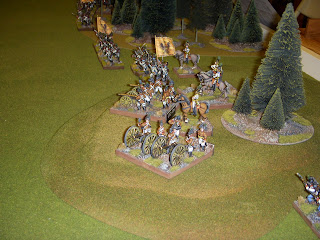 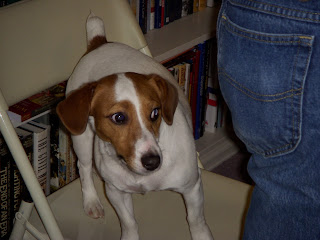 General Toby appears to be leading from the rear. 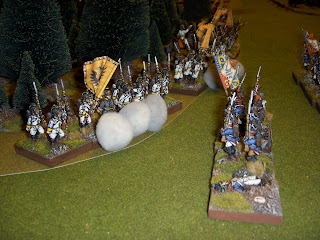 French assault presses home on the Austrian right flank.  The French infantry battalion has suffered a 1 Unit Integrity loss as indicated by the casualty marker. 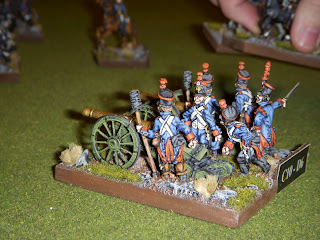 French artillery gaze in wonder as giant fingers from above lift members of their army. 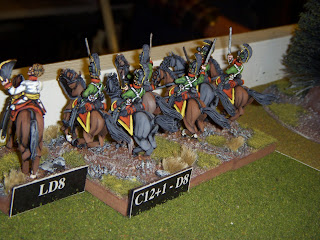 Austrian cavalry (well, the one regiment of three that decided to make the march and appear in the battle) rout to the rear.  Why do all newly painted units perform so badly in their first battle?? 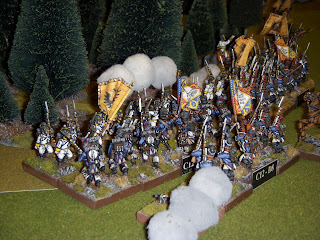 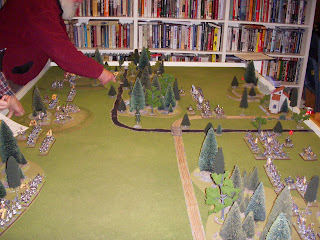 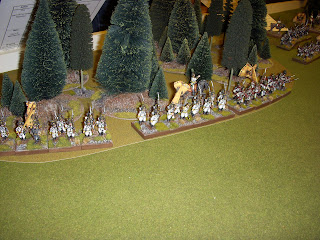 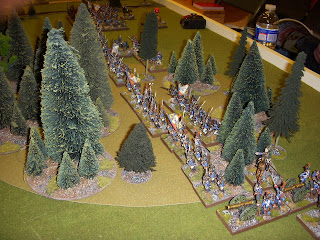 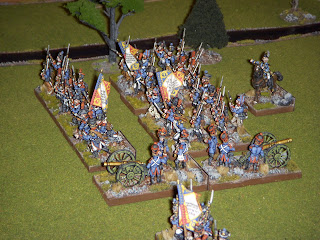 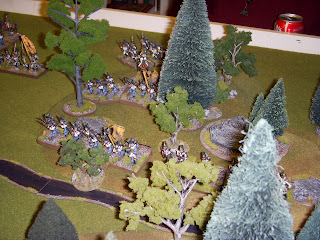 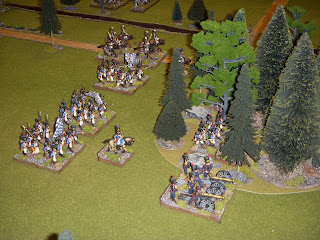 Bavarians step out sharply.
Posted by Brent at 1:08 PM 2 comments: